When India wrapped up the ODI series 4-1, they achieved a new high – this was the first instance that they registered four-victories in an ODI series in New Zealand. The Indians were able to shrug off the loss in the 4th ODI, overcome and precarious opening spell in the final ODI, and bounce back in quick time and this speaks volumes of their resilience.

The action now shifts to the final leg of the tour with three T20I’s lined up. The 1st one will be played at Wellington, the venue of the just concluded 5th ODI.

Note that Seifert is the host’s power-hitting wicket-keeper. Kuggeleijn is a fast-bowling all-rounder. Tickner is a pace-bowler as well while Mitchell earned his maiden national call on the back of some strong all-round performances in the Super Smash series.

Also, note that there is no Trent Boult and that will be one less thing for India to worry about. Boult earns a well-deserved rest after some stunning spell in the ODI series.

Note the reinforcements for the tourists for the T20 leg of the tour – Krunal Pandya, Siddarth Kaul and the big-hitting Rishabh Pant. The rest of the squad, having just featured in the ODI series, appears set to switch gears.

After a stellar show in Australia, Rishabh Pant will be itching to get a game and then send a few soaring into the stands. With Dhoni in the squad as well, if Pant is considered, he will don the hat of a batsman.

Krunal Pandya had a decent debut in Australia and he now returns to the squad on the back of relatively good performances against the England Lions at home.

Rishabh Pant: he’s in good nick, he can be explosive and what’s more, he’s got Mrs. Time Paine rooting for him. He’s got the world at his feet and appear set to get cracking at Wellington

Krunal Pandya: in Australia, the older Pandya showed that he belongs to the big stage. Daring and adventurous, Krunal will be itching get going

Hardik Pandya: the all-rounder stunned fans with a dramatic return to the squad. With a stunning catch and some brilliant hits to the stands, he has left no doubt that the recent off-field fiasco hasn’t hurt his form one bit

Jimmy Neesham: With a sparking cameo in the 5th ODI, Neesham showed just how dangerous he can be. His game is tailor made for the shortest format and should he get going, he’ll trouble any side in the world

Colin Munro: The all-rounder fits the T20I mould perfectly. He can strike it big at the top of the order and then send down some overs on a need basis

Colin de Grandhomme: Yet another all-rounder for the hosts with proven T20 credentials. Pick him for multiple points scoring abilities for your Fantain Fantasy XI. 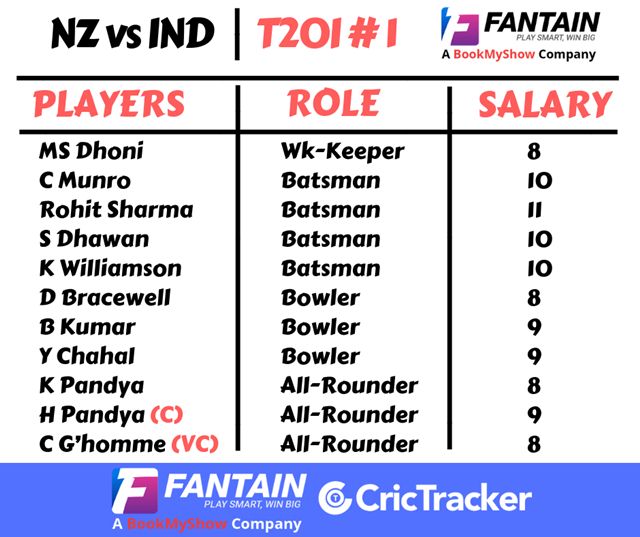