Zeeshan Maqsood and Andrew Balbirnie will be safe options as captain or vice-captain.

The 3rd game of the Oman Pentangular T20I Series, 2019 will be played between Oman and Ireland at the Al Amerat Cricket Ground Oman Cricket (Ministry Turf 1) in Al Amarat.

The inform Ireland team started the Oman Pentangular T20I with a comfortable win over the Netherlands. Ireland were the winners of the recently concluded T20I Tri-series at home where they lost to the Dutch team. However, they settled the scores with a 6-wicket win on Saturday. The top-order efforts helped the Netherlands team to finish with 167/7 in 20 overs.

Ireland’s top four crossed 20 but none of them managed to convert it. However, Harry Tector scored an unbeaten 26-ball 47 to complete the chase with 1.4 overs to spare. They will now face the home team on Sunday in their 2nd match. Oman registered a big win in the tournament opener. They restricted Hong Kong to a low score of 96/9 and chased it down with 37 balls to spare.

A little cloud covering is expected to be seen in the 2nd half of this game which starts at 9:30 local time. We might not see any rain at any point of the day at this venue.

The unbeaten record for the chasing teams continued at the Al Amerat Cricket Ground. However, on Saturday morning, Hong Kong posted only 96/9 which is about 50 runs less than the par score. The reason for that was Hong Kong’s struggles and Oman’s effectiveness with the ball. We might witness a total of over 150 in Oman-Ireland match.

Paul Stirling will be hoping to make most of his good form after throwing away start in the previous game. Gareth Delany gets to bat at No.4 and played a decent knock having opened the innings during the Tri-series at home in Stirling’s absence. All-rounder Mark Adair is an exciting prospect and can contribute with both bat and ball. Zeeshan Maqsood, Khawar Ali and Syed Amir Kaleem were expected to play a key role for Oman and earned the most points among all Oman players in their first game.

Zeeshan Maqsood and Andrew Balbirnie will be safe options as captain or vice-captain due to the roles they play for their respective teams. 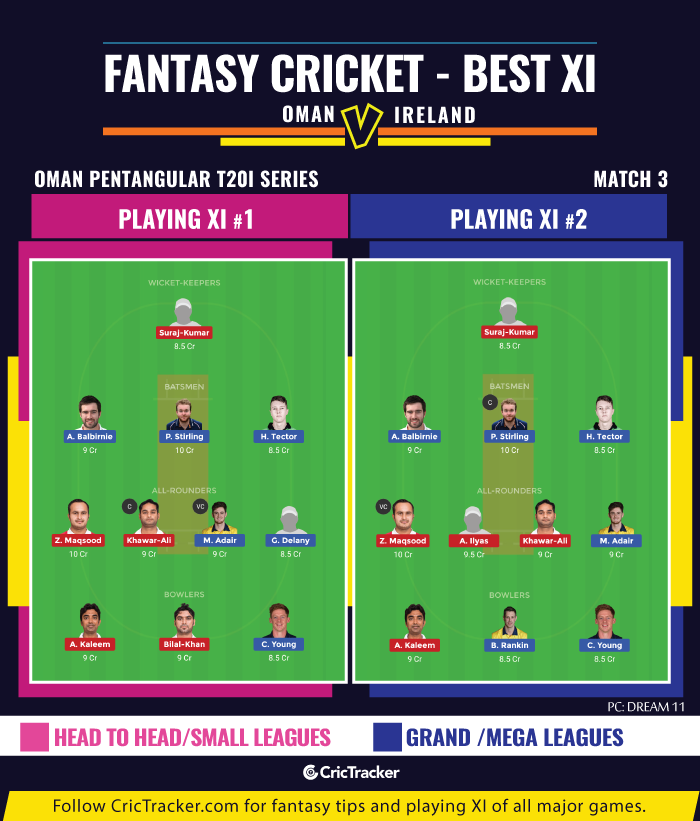 Ireland fielded their best possible XI in their first game and might remain unchanged on Sunday. Oman might not prefer to make changes to the winning combination.

Ireland could sneak in a win over Oman due to their experience.