If losing Ishant, Umesh and Shami weren't enough, Jasprit Bumrah also packed his bags and was ruled out of the marquee game after harboring abdominal strain in the third Test.

Team India is having a memorable outing in the ongoing four-match Border Gavaskar Trophy against Australia as the spectators have been served with some high-voltage entertainment. However, it seems that the visiting nation has been jinxed as it is losing its key players one after the other. The Men in Blue have been plagued with a truckload of injuries since the commencement of the Border Gavaskar Trophy.

This resulted in India being left with only a handful of players who were fit enough to take the field in the ongoing last Test of the marquee series at The Gabba in Brisbane. Against a side like Australia where any opponent needs to enter with their full strength, India is playing with a completely inexperienced bowling attack where the most experienced Test bowler is Mohammed Siraj, who had made his debut in the same series at Melbourne Cricket Ground.

The pace sensations Ishant Sharma and Bhuvneshwar Kumar were the first ones who got chalked out of the touring party as they sustained injuries during the 13th edition of the Indian Premier League (IPL). This was followed by Mohammed Shami packing his bags after playing the first Test in Adelaide as he suffered a fracture on his bowling arm. 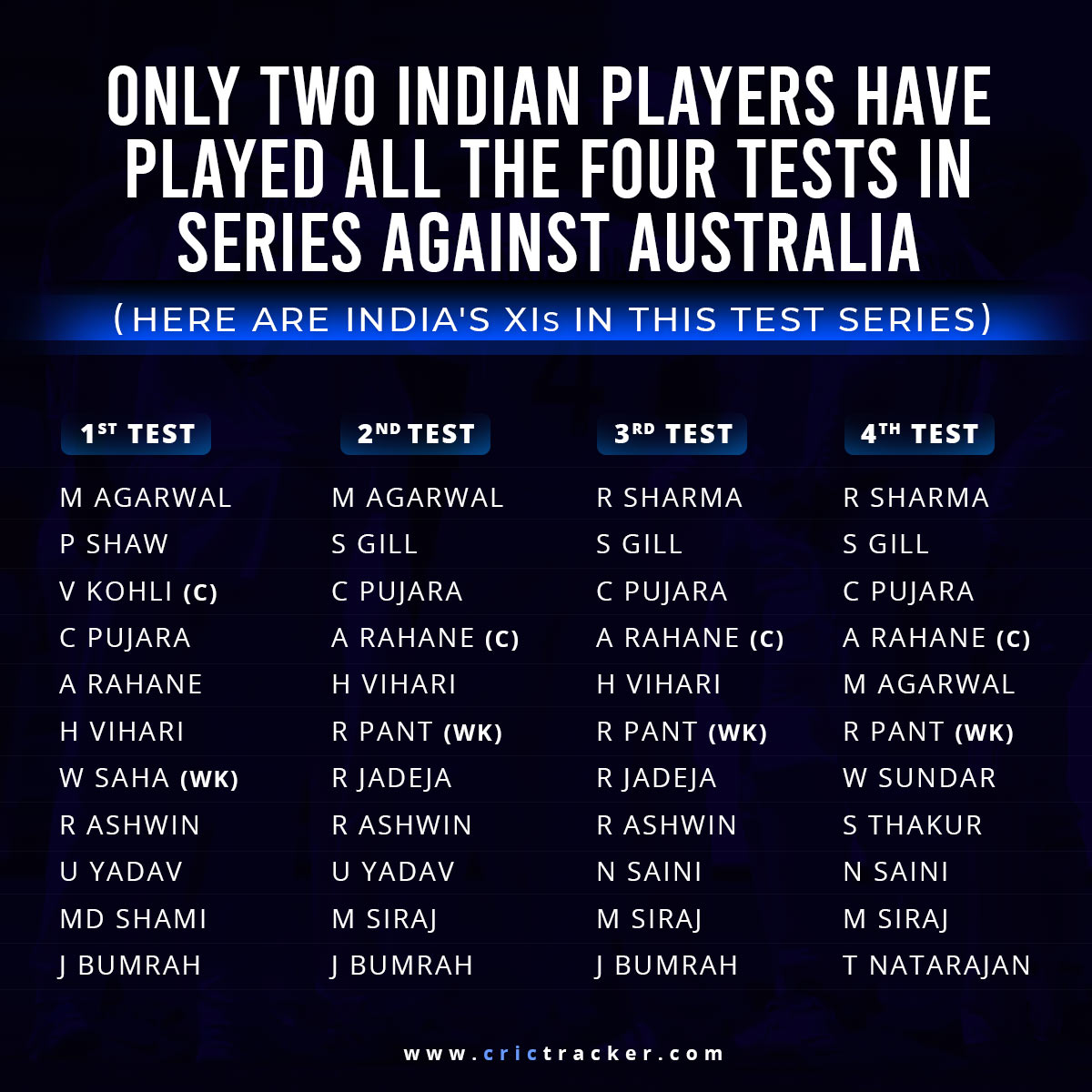 The second Test match against Australia saw India losing another pacer Umesh Yadav as he pulled a calf injury while playing in the second innings at MCG. The next to follow was KL Rahul. The batsman went back to India without playing any Test as he suffered an injury in the nets earlier this month.

If losing Ishant, Umesh and Shami weren’t enough, the hero of India’s victory in the Border-Gavaskar Trophy 2018-19 Jasprit Bumrah also packed his bags and was ruled out of the marquee game after harboring abdominal strain in the third Test.

The Sydney Test was full of injuries for India as they also lost their star all-rounder Ravindra Jadeja and middle-order batsman Hanuma Vihari as they suffered a thumb injury and hamstring respectively. To top this off, the Day 1 of the Brisbane Test saw Navdeep Saini leaving the ground and going for scans after complaining of a groin injury.

Surprisingly after all the injuries, India is left with only two cricketers who featured in all four Tests against Australia. One among them is stand-in captain Ajinkya Rahane and the other one is India’s batting mainstay Cheteshwar Pujara. Rest all the players have been either ruled out/pulled out of the series or have been dropped due to their poor form.