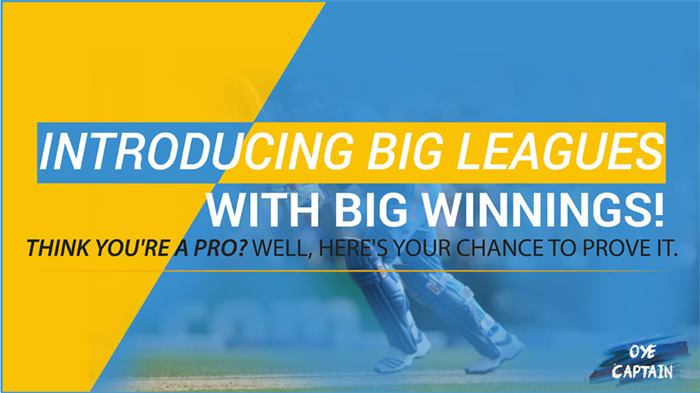 Always fancied picking an XI for your team? Here we give you a chance to be the Captain. Oye Captain is one of its kind fantasy sports platforms for the sports lovers in India. We built Oye Captain with a mission to enrich fantasy managers with the best experience online. If you think you know the game enough to predict the best performers in a match this is your chance to get paid for it.

The excitement of a match increases furthermore when you have your own team battling for the top spot. Scanning the statistics, predicting the team, analyzing the wicket, getting together the perfect combination with the pressure of squeezing it in the available budget; imagine the adrenalin rush when you only have a few minutes in hand to finalize your XI and the toss is about to happen.

Here is your chance to churn your knowledge and earn big. Oye Captain features a variety of leagues from free for all to paid leagues that range from ₹ 15 where you stand a chance to win ₹ 1250. An investment of ₹ 25 can earn you as much as ₹ 5000 and if that’s not enough increase the stakes to ₹1170 and you can win back ₹ 10,000 and there are bigger contests than that. Higher the risk, higher the reward.

Select a match, to create your team you get 100 credit points as budget. You have to pick minimum – 3 batsmen, 3 bowlers, 1 allrounder, 1 wicketkeeper and the other 3 players from any category, of course, you wouldn’t want to have two keepers in the team.

You can select a maximum of 7 players from one team to ensure there is a balance. Once you have framed the XI, go ahead and name the Captain. The skipper earns you double the points and the vice- captain 1.5 times the points for his performance. The cutoff time for you to select and submit your team is 30 minutes before the start of the match.

Check out the points table here.

The cricketing season is approaching its peak with all the major teams slated for a big series. While Team India is just about to conclude the Test series against England, they will play a three-ODI and three-T20I series against the Brits in the New Year. MS Dhoni will return to action and so will Eoin Morgan for England. Both the teams have a reputation of being quality limited-overs sides and with there being hardly any home advantage in the shorter formats will be interesting to see who takes the series.

Meanwhile, the Big Bash League, Australia’s domestic Twenty20 league is just about to kick off from the 20th of December; some of the biggest names in T20 cricket will feature in the league. BBL has always had the reputation of producing thrilling and high-quality T20 matches and it will be expected to come true to the hopes in the upcoming sixth season as well.

In the international front, Sri Lanka is all set to tour South Africa for a grilling series that comprises of three Tests, four ODIs, and three T20Is. The tour kicks off on 26th December and the last match will be played on February 10. While the Proteas have emerged as a definite force at home and on tour the Lankans will really have to take their game a few notches higher to match them in their own back yard.

In February-March 2017 Australia will tour India for a four-Test series. The hosts who have been phenomenal in the longest format of late beating teams like South Africa, New Zealand, and England with utter ease will be expected to spin out the Aussies in one of their biggest Test challenges for the year.

Now that you know everything about the most exciting Cricket Fantasy League and the upcoming matches, go out there select your team and win.