Australia inflicted more pain after they defeated the depleted Pakistan side going 4-0 up in the 5-match ODI series.

How often does a team chasing a modest 278 lose after two batsmen score centuries? Not often you might think but with the vulnerability that Pakistan brings to the fray, such anti-climaxes can be expected. Debutant Abid Ali and Rizwan scored centuries and Pakistan looked well on their course to grab their first victory when the duo compiled 144 runs for the third wicket.

Thereafter, Adam Zampa struck in the 42nd over dismissing the debutant Abid. That opened the floodgates and his teammates fell like a pack of cards and surrendered to the Kangaroos. Earlier in the day, Maxwell missed out on a well-deserved century when he was dismissed on 98 (82). But it wasn’t before an exhibition of a wide array of shots on what seemingly was a difficult pitch to bat on.

Australia would not want to settle for anything less than a clean sweep here. If successful, this would be the first time in 3 years that they would be achieving this feat. Incidentally, the last team they achieved a white-wash, Pakistan was at the receiving end.

Australia would be happy about runs that Carey scored. He drove, he hooked and swept on this slow and low wicket. With Australia finalizing their World Cup slots, Carey’s know is more than just timely.

For the 5th ODI, the tourists would want to send Turner a little higher too with series already in the bag.

Meanwhile, Pat Cummins is set to miss another game as the management rewarded him with some rest for his spectacular performance throughout the season.

This Pakistan team looks in shambles at the moment. Like headless chicken and they appear clueless as they go about their business. This is indeed worrying in the lead up to the World Cup.

Imad Wasim led his bowling troops well in the absence of their stand-in captain, but bottled when it mattered the most, as the lower middle-order comprising of Umar Akmal, Saad Ali, and  Imad Wasim scored 15 runs between themselves.

With just 6 games to go before the World Cup, Pakistan would want to get their act together and make sure they end on a high note.

The availability of Mallik and Imam remains uncertain. Malik is carrying bruised ribs, while Imam is reportedly ill.

Aaron Finch: A month ago, pundits of the game were discussing about the axe Finch deserves for the poor run of form. A month later, the stocky opener has scored 398 runs in 4 games, which is the highest aggregate by an Australian in a bilateral series against Pakistan

Glenn Maxwell: His morale is high and he’s timing and placing his shots to perfection. At this moment, anything he touches is turning into gold

Umar Akmal: This will be a do-or-die game for Umar whose exploits in PSL earned him a place in the side. He’s looked a mere shadow of what he’s capable of and at this final juncture, he’d want to grab this opportunity with both the hands. 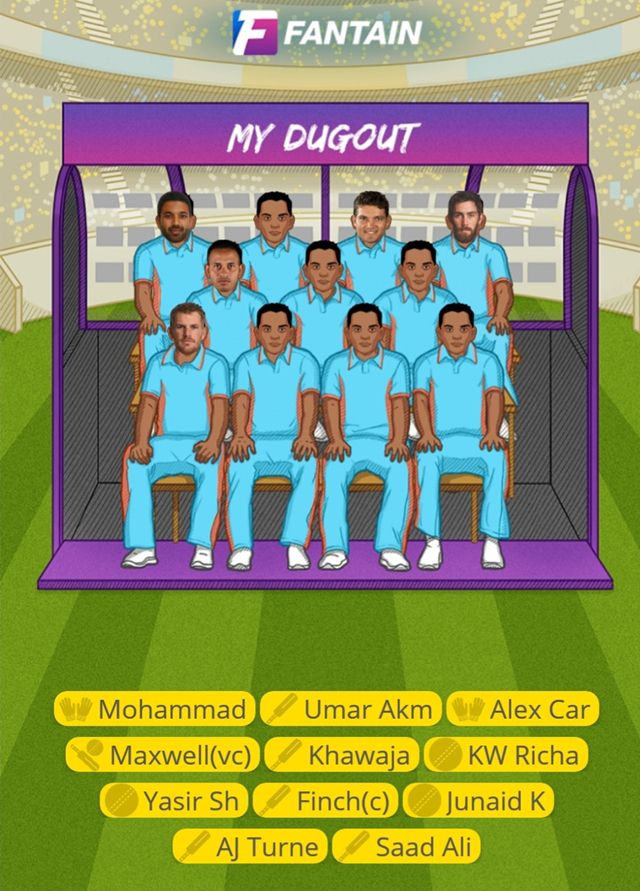 So check-in to Fantain, enter the various contests on offer and remember, #GameHaathMein