Who will win the match? Pakistan or Zimbabwe?

Even as the Indian Premier League (IPL) is approaching its business end, international cricket has returned in Pakistan. Zimbabwe have toured the country for three ODIs and as many T20 Internationals starting from October 30, Friday. Babar Azam is set to lead his country in the 50-over format for the first time and has expressed confidence that his team will do well on their return to the sport after a COVID-19 pandemic enforced break.

Meanwhile, Zimbabwe team has reached Pakistan and have trained well post their quarantine period. Their veteran players like Sean Williams, Brendon Taylor and Sikandar Raza will be crucial to the team’s fortunes. Pakistan, on the other hand, have suffered an injury blow with their vice-captain Shadab Khan being ruled out of the first ODI. Usman Qadir, the leg-spinner, is likely to make his ODI debut.

Rawalpindi hosted an ODI more than a decade ago. But domestic cricket is being played at the venue. It hosted 11 matches of the Pakistan Cup in 2019 and on seven occasions, the team batting first crossed the 300-run mark. The lowest score at the venue during this period was 269 and with this being the start of a new season, the pitches are likely to be flat as well.

As far as the conditions are concerned, there is no chance of rain at all during the match. The temperature will hover in the mid-20s.

No wonder Babar Azam will be keen on leading from the front and he is Pakistan’s best batsman as well. He will bat at number three and is definitely in contention to become the top performer for his team. Babar also had a decent National T20 Cup and was in form on England tour too. Expect him to notch up a big score.

Brendan Taylor is one of the most experienced batsmen for Zimbabwe. But Sikandar Raza is the all-rounder who has the ability to contribute in all the facets of the game. He mostly bats at five or six in the ODIs and more often than not, has bailed the team out of trouble. His off-spin bowling has also earned a lot of wickets for Raza.

The Prediction is for Pakistan to win this match and take a 1-0 lead in the series. 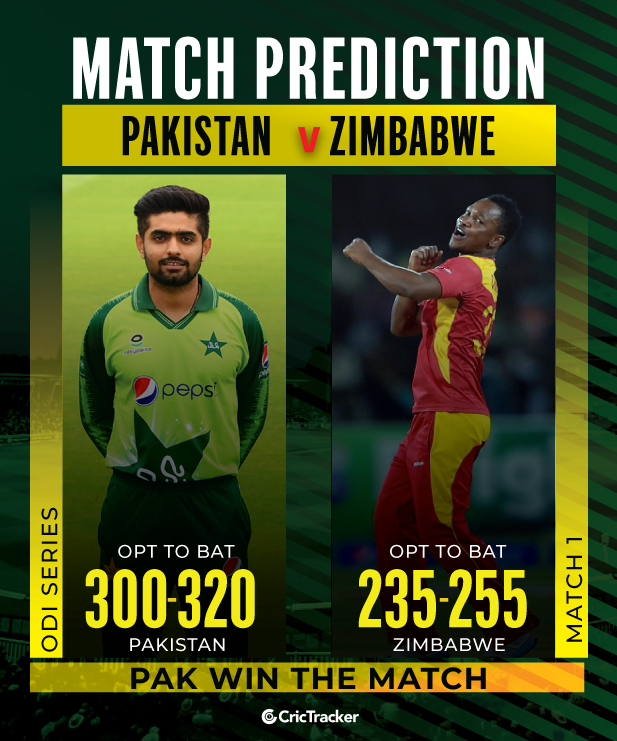