Will Zimbabwe be able to level the series?

The ODI series between Pakistan and Zimbabwe got underway on Friday and only after one-day break, the two teams will lock horns again on Sunday. The hosts got out of a jail in the series opener thanks to a sensational five-wicket haul from Shaheen Afridi. He was well supported by Wahab Riaz who also picked four wickets. However, Pakistan will be keen on improving their batting effort as the middle-order once again seemed under-cooked.

Zimbabwe, on the other hand, must be disappointed. They had a great chance to cause an upset in the first game itself. But their centurion Brendan Taylor got out at the wrong time and the rest of the team collapsed with the target in touching distance. Having said that, they will be happy as well after pushing Pakistan to the corner. Their death bowling remains a concern and the management will hope that they improve in this aspect.

The surface at the Rawalpindi was a decent one to bat on. But there was something in it for the bowlers all the times. The spinners as well as pacers managed to get something out of the pitch. The match is likely to be played on the same pitch and it might slow down a bit more.

As far as the weather is concerned, there is no chance of rain interrupting the proceedings. The temperature is set to hover in the mid-20s throughout the day.

Wahab Riaz has been bowling well of late. He was in exceptional form in the last game as well. He returned with the figures of 4/41. Though Afridi picked five wickets, it was Riaz who broke the crucial partnership between Taylo and Madhevere which was threatening. Riaz was also almost unplayable at the death with the reverse swing also coming into play. Expect him to be amongst the wickets as well.

Wesley Madhevere showed his all-round prowess in the first ODI against Pakistan. He bowled seven economical overs to concede only 31 runs and then batted at six to score an impressive half-century. He will be gutted that he didn’t finish the game for his team. Expect Madhevere to be consistent and this time put up a better show for Zimbabwe.

Live streaming will be available on PCB’s official Youtube channel.

Pakistan are expected to win this match and seal the series. 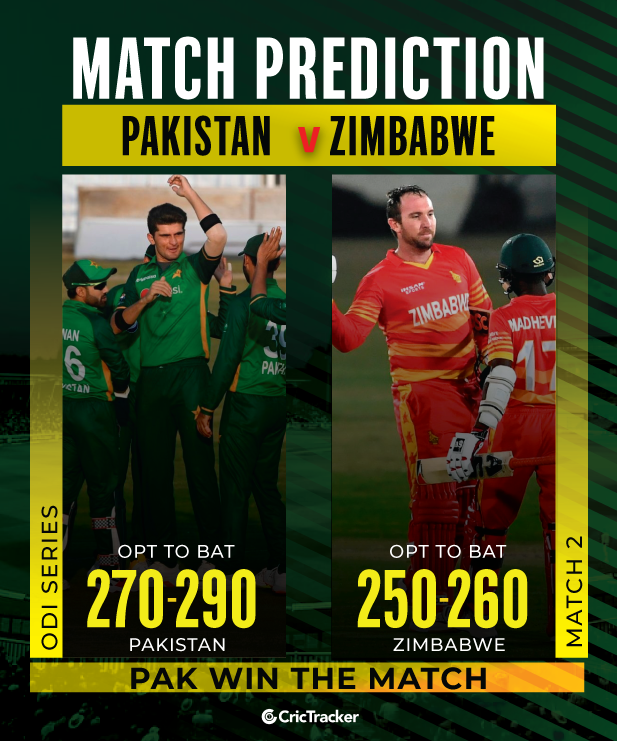