Pakistan may again chop and change with their eleven, keeping in mind their unassailable 2-0 lead.

Prior to the start of their home series against Zimbabwe, Pakistan were deemed to be the runaway favourites. And a scoresheet of 2-0 shows that Babar Azam and Co have already pocked the series with the final game to be played on Tuesday, November 3 at the Rawalpindi Cricket Stadium.

But Chamu Chibhaba’s men can afford to hold their head high for they haven’t been mere pushovers by any stretch of the imagination. Though the African country were a tad off-colour in the previous ODI, overall, they have made Pakistan sweat for the victories.

The third and final game is a mere dead rubber and all Zimbabwe would want is to put their best foot forward and maybe, avoid a clean sweep. In the meantime, Pakistan have chopped and changed quite a bit and the home team may again resort to the same tactic to give their players enough game-time.

Shaheen Shah Afridi was on fire in the opening ODI where he picked up a five-wicket haul. Had he not stepped up Zimbabwe could well have shocked the home team. Leaving aside the ODI, Afridi’s overall form has also been worth envying after his magic spells in the National T20 Cup.

However, the left-arm speedster went wicketless in the previous ODI. But bearing his mind his consistency, the pacer is expected to find his mark in the last game.

Among all the batsmen, Brendan Taylor has looked the most accomplished and consistent. The veteran is the leading run-scorer in the series with 148 runs and a strike-rate of 91.35 shows that he’s pretty much been fluent.

Though his team lost the first ODI, Taylor got the Player of the Match award for his knock of 112 runs. Needless to say, that Zimbabwe will again look up to the 34-year-old for a knock of substance.

Pakistan are expected to win this match and whitewash the series. 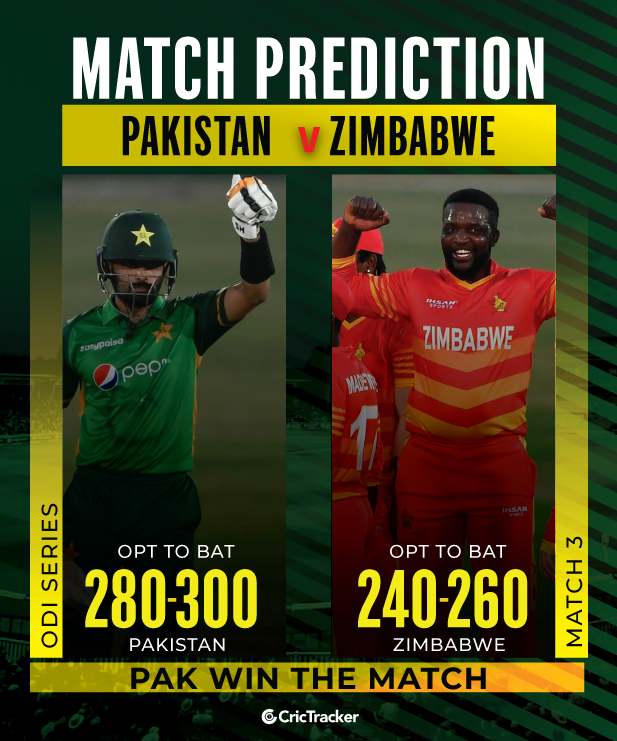