Zimbabwe are yet to beat Pakistan in a T20 International.

Zimbabwe might have lost the ODI series 1-2, but the fact that they were highly competitive can’t be denied by any means. In two out of the three ODIs, Chamu Chibhabha and Co gave the Men in Green a run for their money.

Their batting didn’t flatter to deceive as two of the three leading run-scorers in the series were from the visiting team- Brendan Taylor (204 runs) and Sean Williams (197 runs). In fact, fast bowler Blessing Muzarabani ended as the top wicket-taker with a five-wicket haul.

Pakistan, on the other hand, would be disappointed after not being able to close out the series. Babar Azam’s men would want to start the T20I series on a healthy note after the Super Over loss. The opening game of the three-match series is scheduled to be played on Saturday, November 7.

The pitch in Rawalpindi during the ODI series was an excellent one batting. But five-wicket hauls Muzarabani, Mohammad Hasnain, Shaheen Afridi and Iftikhar Ahmed meant that the strip has something for the bowlers and the game is expected to be a thriller.

The playing conditions will be pleasant with the temperature around the 25 degrees Celsius mark. The humidity will be in the 30s.

Babar Azam showed his class in the ODI series, becoming the leading run-scorer. The 26-year-old notched 221 runs at an incredible average of 110.50, though his run-a-ball 125 in the final ODI went in vain.

Hence, it goes without saying that the Lahore-born is in stupendous form. In T20Is, he is the former world number one and has 1548 runs at an average of nearly 50 with as many as 14 fifties.

Brendan Taylor had an outstanding campaign in the ODI series. The right-hander hammered a century in the first ODI, albeit it came in a losing cause. He also turned with a half-century showing that he can show consistency. 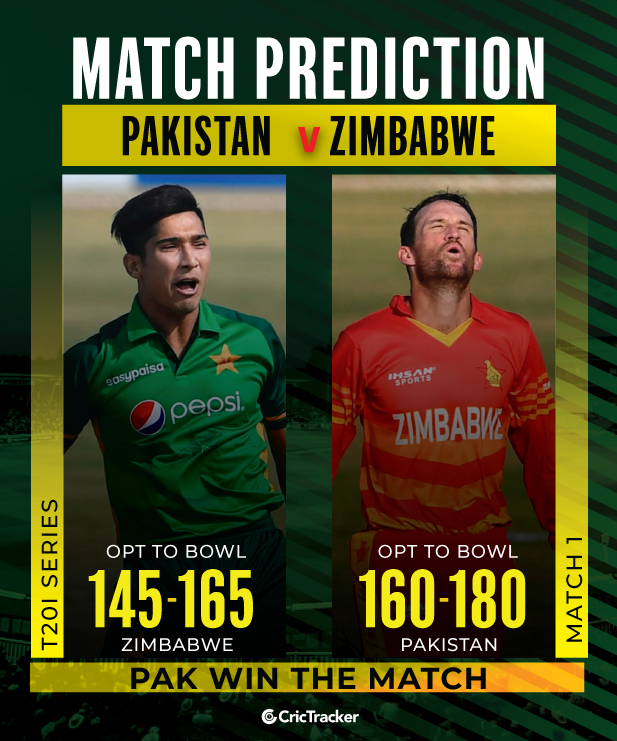