The visitors have been competitive and would want to end their campaign on a positive note.

Pakistan have been clinical thus far in the three-match T20I series. Babar Azam and Co have already pocketed the series, taking an unassailable 2-0 lead. The last match of the series will be played on Tuesday, November 10 at the Rawalpindi Cricket Stadium.

The hosts failed to complete whitewash in the ODI series, losing in the Super Over, but will be looking for the clean sweep next this around. In the last game, the bowlers put forth a strong show and restricted Zimbabwe to an under-par score of 134 for seven in 20 overs.

In the run-chase, Pakistan tracked the target down with 29 balls to spare, stamping their authority. Overall, Zimbabwe have been decent, and haven’t been mere pushovers. Chamu Chibhabha and Co would be looking to salvage some pride and win the last game.

The pitch in Rawalpindi has been a good one for batting, but the chasing teams have found it easier. It has something for both the pacers and the spinners and another good game seems to be in the offing.

Batting second should be the way forward. The playing conditions will be pleasant enough with the temperature around 25 degrees Celsius. The humidity will mostly be in the mid-30s.

Babar Azam has arguably been the standout batsman for Pakistan in the series. He had a fifty and a run-a-ball 125 in the ODI series. The 26-year-old Lahore-born is currently the leading run-scorer in the T20I series as well.

In two matches, he has scored 133 runs at an incredible strike-rate of 160.24. The right-hander will be looking for another massive score and end the series on a positive note.

Brendan Taylor was outstanding in the ODI series. The right-hander notched 204 runs at an average of 68 with a top score of 112, though it came in a losing cause. In the T20I series thus far, he only has 23 runs to show for his efforts.

He can hit the long ball and it’s only a matter of form before he returns to form. Taylor will be looking to give Zimbabwe a flying start in the last and final T20I. 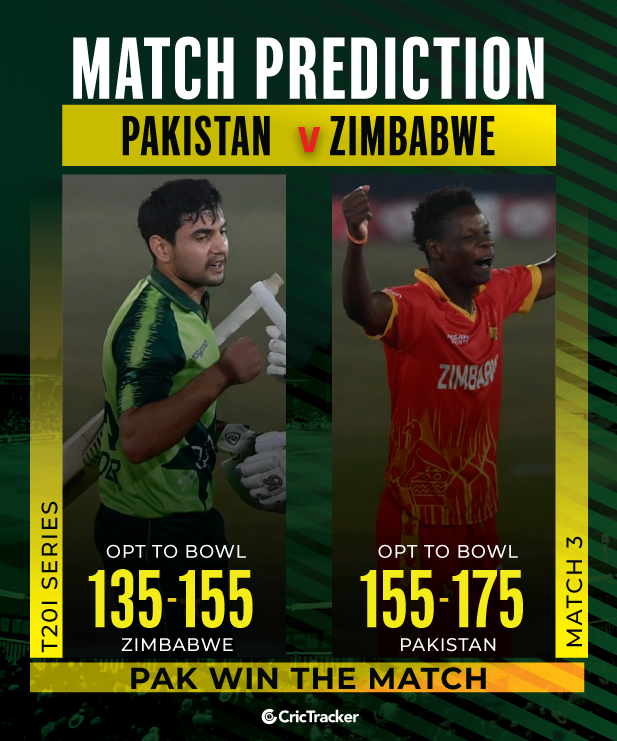