Pakistan vs Australia, 3rd T20I, Match Prediction: Who will win the match?

Pakistan vs Australia, 3rd T20I, Match Prediction: Who will win the match?

Will Australia be able to register a consolation win?

Glenn Maxwell mistimes the length ball from Shaheen Afridi and there goes Australia’s last hope to level the T20I series. Pakistan have already won the three-match contest and the dead rubber is the visitors’ last chance to register their only win on the tour. It will be interesting to see if they make any changes to their top-order after back-to-back failures.

Aaron Finch, Chris Lynn and D’Arcy Short have been extremely disappointing in the power play in both the outings. Having said that, Maxwell’s return to form was a shining light for them and he could be key for Australia in the concluding game of the tour. Their bowlers, on the other hand, have done the job perfectly all the time restricting the opposition to a gettable total.

Sarfraz Ahmed was all pumped up after winning the previous encounter as Pakistan won their tenth consecutive series in the shortest format. The team in the T20Is looks very much settled with all the bases perfectly covered. They’ve been on a rampage for a long time now in this format and deserve to take this game lightly. Though they would love to keep the Aussies winless on this tour.

Dubai will host this game as well and most probably, the game will be played on the same pitch as the next T20I at the same venue is scheduled to be played next week with Pakistan facing New Zealand. In that case, the spinners will come into the action more and no wonder the Men in Green will be itching to unleash on the tourists for one final time.

Pakistan will surely look to test their bench and would want to give a game to the players who haven’t featured in the series so far. Waqas Maqsood, the left-arm pacer, might make a debut while Usman Khan can also come into the contention. Sahibzada Farhan is also likely to replace one of the top-order batsmen.

Australia have no option but to continue with the same set of batsmen despite their failures. The same players should take the field as Short and Finch are expected to give a good start to the team with Chris Lynn coming out to bat next at number three. Alex Carey’s batting position might be experimented as he generally opens in the Big Bash League (BBL). The bowling attack has been doing extremely well and shouldn’t be changed. In that case, Peter Siddle will warm the bench once again.

The prediction is for Australia to register a consolation win in the last game of the tour. 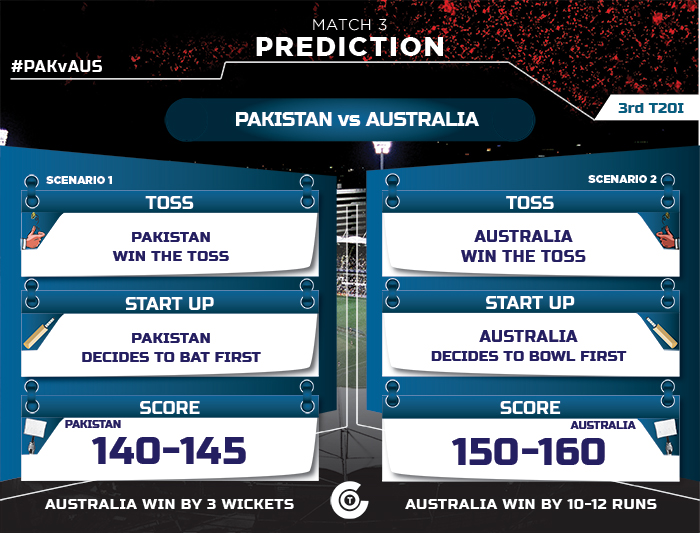