The final ODI will be a test of the better bowling side between the two teams.

The Pakistan team is on the verge of bagging a massive embarrassment in the five-match ODI series against Australia. The team is 0-4 down in the series and might be whitewashed if they fail to win in the fifth ODI as well. The Kangaroos have inflicted huge damage to the egos of the Pakistan team just ahead of the World Cup 2019. A few of their important players might not be featuring in this series.

Yet, many of the cricketers who will be flying to England in May are still a part of the squad. The batting of the ‘Men in Green‘ has raised a major concern ahead of the quadrennial tournament. Their best performance with the bat came in the fourth ODI but it was just two players who dominated the proceedings. Winning the final game of the series will be quite a daunting task for the home team looking at the way the opposition is playing at the moment.

The Dubai stadium has got a decent surface to bat on. Once the batsmen dig in and settle themselves in, it is quite hard to dismiss them. It is predicted to be a cloudy day on Sunday. The pitch is expected to be the same throughout the 100 overs and the dew might have a massive role to play.

Imam-ul-Haq is a certainty to be in the World Cup squad. Hence, Pakistan might look to continue to rest him and will play Abid Ali again. He was highly impressive on his debut with a blistering century. There isn’t much clarity about the fitness of Shoaib Malik. He was ruled out of the fourth ODI due to bruised ribs but will walk back straight into the eleven if he is fit. Imad Wasim will lead the side if he isn’t available. Pakistan might look to give another opportunity to Mohammad Amir.

Australia rested Pat Cummins for the remainder of the series just before the fourth ODI began. Thus, it gives an extra opportunity to both Nathan Coulter-Nile and Kane Richardson. The Aussies are yet to try out Ashton Turner. He has warmed the bench in all the four ODIs thus far and might get his opportunity in the this game.

The prediction is that Australia will win the match and clean sweep Pakistan. 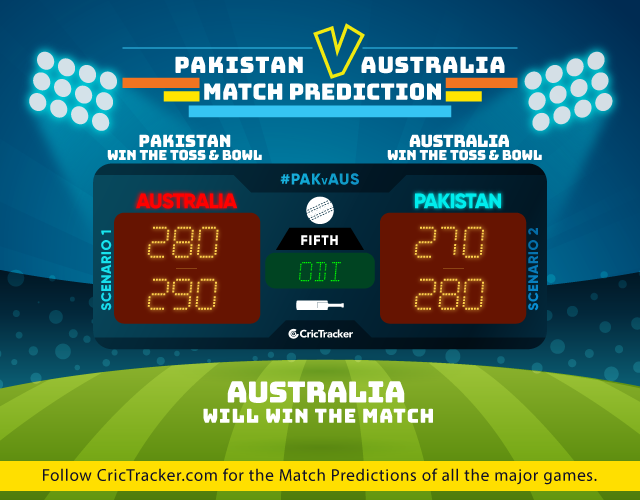