The average score in T20Is at the Lahore's Gaddafi Stadium is 174.

Sri Lanka were far better that what the score-line in the three-match ODI series versus Pakistan would suggest. The visitors were depleted, but it couldn’t fizzle the spirit out of them by any means. Lahiru Thirimanne and Co gave the Men in Green a run for their money in the 0-2 defeat. It’s now time for the three-match T20I series, which gets underway on Saturday, October 5 in Lahore.

Dasun Shanaka, who was excellent in the ODIs, especially with the bat, is set to captain the visiting team. The Lankans don’t have a great record against Pakistan in the shortest format. Out of 18 matches, they have lost 13, ending on the losing side in the last six matches. Their last win came in December 2013 in Dubai. The task won’t be easy versus ICC’s number one ranked T20I team.

There won’t be any chance of rain and the conditions will be pleasant for playing the game of cricket. The cloud cover during the match will be 14 per cent, which is undoubtedly good news. The temperature will be around the 25 degrees Celsius mark with the humidity in the 60s and 70s. There will be a bit of dew in the second half, but it’s not expected to make much of an impact.

The pitch at the venue in T20Is has been absolute belter. Scores of 170 plus have been a common phenomenon. The average score at the Gaddafi Stadium in T20Is is 174, around six runs less than the average first innings score. Hence, it can be said that the team, batting first has found a wee bit easier on this ground in Lahore. Sides would be better of putting a big score on the board.

Babar Azam is in excellent form after topping the run-charts in the T20 Blast, paying for Somerset. His T20I average this year in 54 with a top score of 90.

Dasun Shanaka showed in the second ODI that he can smash the leather a long distance and gets runs at a fair clip. He is also a pretty handy aspect with the ball. 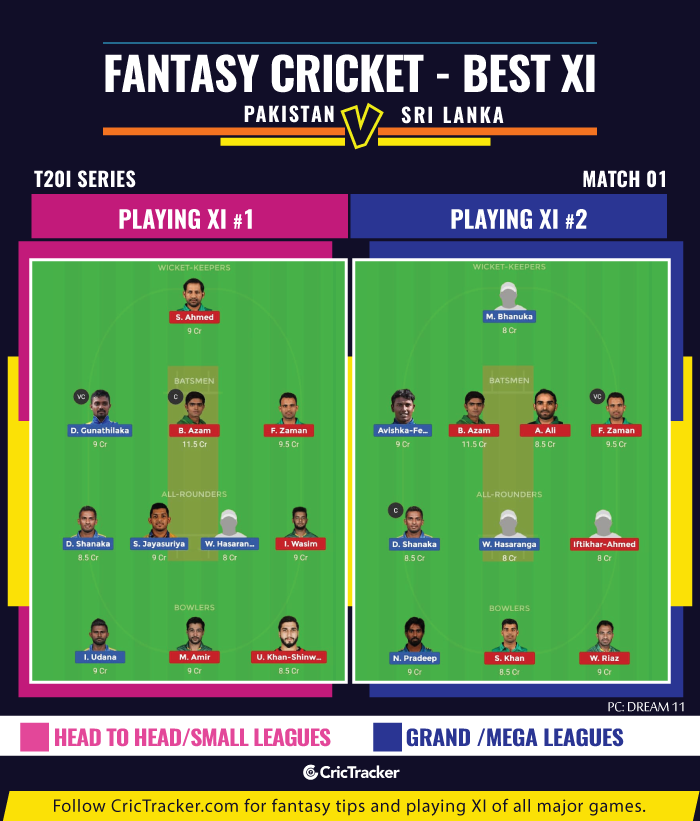 One can pick more top-order batsman as it’s a good pitch for batting. Bowlers who mostly bowls at the death can be picked as well.

Pakistan are expected to win the match.