The Lankans can think about bringing in Lakshan Sandakan to add the X-factor to their bowling.

Pakistan were expected to thrash the under-power Sri Lanka team at the National Stadium in Karachi. Babar Azam’s 11th ODI ton helped them put up 305 on the board. The bowlers, especially Usman Shinwari ran through Lanka’s top-order. From 28/5 in the 11th over, Shehan Jayasuriya and Dasun Shanaka’s 177-run stand for the sixth wicket kept the home team at bay for around 30 overs.

Their partnership put the skids under Pakistan and threatened to take Lanka home from a hopeless situation. Jayasuriya fell four runs short of a century, but got a pat on the back from Shanaka, the skipper for the T20I series. Having already shelled the chance of winning the series, the visitors will be looking to at least draw level when the teams lock horns in the third ODI in the national capital.

The conditions for the game will be clear with no chances of rain during any part of the day. There will be some clouds with the temperature around the 29 degrees Celsius. The humidity will be in the 60s and 70s. Coming to the pitch, it won’t have much for the bowlers. Making inroads with the new ball becomes that much more important. The dew will be challenging for them as well.

The Men in Green are likely to persist with the winning combination. Fakhar Zaman and Imam-ul-Haq got starts last time and it’s time for them to convert them into something substantial. Babar Azam became the third fastest batsman to 11 ODI centuries and the Pakistan vice-captain must be brimming with confidence. Haris Sohail also looked in good touch in a 111-run stand with Babar.

Skipper Sarfaraz will be looking to make amends after getting out in the last game. Iftikhar looked as someone, who can play the big shots at the death and also churns out some handy overs with the ball. In bowling, Shinwari was the standout with a five-wicket haul. Even Wahab and Amir went at three runs per over. Shadab picked two wickets, but he needs to sort out his line and lengths.

The Sri Lankan top order floundered alarmingly, especially while facing the left-arm trio of Wahab, Shinwari and Amir. Skipper Lahiru Thirimanne also perished for a duck, adding to the hosts’ batting woes. But Jayasuriya and Shanaka showed the top-order how not to crumble under pressure. The duo also displayed that Lankans aren’t there in Pakistan to meekly surrender with a depleted side.

Avishka Fernando, who’s deemed as one of the brightest talents in Sri Lanka, will be itching to make an impact after getting out for a duck. The bowling department seemed a tad out of gas. The team may try to rope in Lakshan Sandakan, who can leak runs, but also picks wickets. A lot depended on Nuwan Pradeep and Isuru Udana, both of whom failed. Hasaranga has to find more consistency.

The prediction is for Pakistan to win the match and the series. 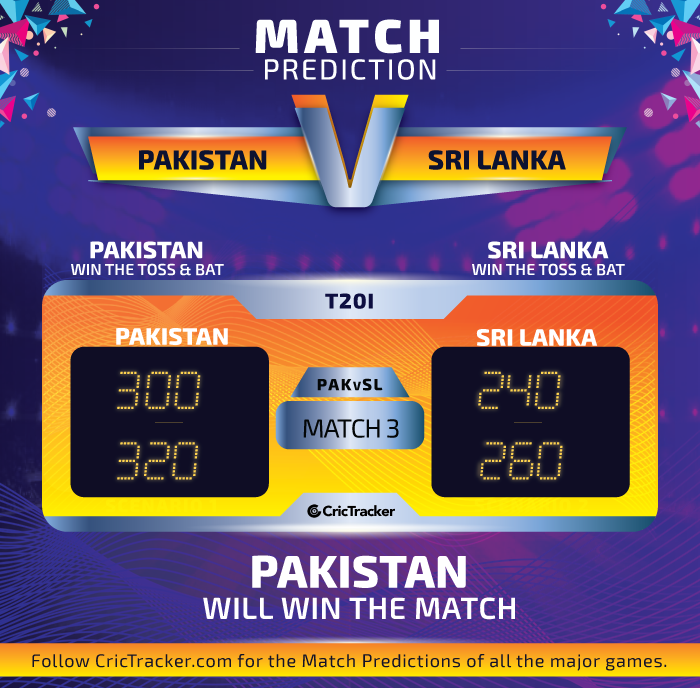