A much weakened West Indies side will take on Pakistan in the first match of the T20I series.

After the West Indies superstars refused to travel to Pakistan, this T20 series has lost some of its colour, however, it still remains a rare international cricket event to be held in Pakistan in the past decade and there should be a reasonable crowd gathering as Pakistan and West Indies take centre stage at the National Stadium, Karachi this evening.

Whatever be their problems in the other formats of the game, both Pakistan and West Indies have been pretty consistent in T20 cricket in the last few years and it should be a good, entertaining contest, even though West Indies is a bit on the weaker side with its first string squad not available. No doubt, Pakistan will have the home advantage and they will start the favorites, but the possibility of the Caribbean boys pulling off an upset can’t be totally ruled out.

The pitch that was on offer at the National Stadium during the recently concluded PSL final was a bit two-paced and it wasn’t particularly a batting friendly deck. Anything that was pitched short of a length that night was hard to put away and a lot of batsmen lost their wickets trying to play horizontal bat shots, misjudging the pace on the delivery. If the pitch is of the same nature, this game might not be a very high scoring one.

Choosing to field will be a wise call whoever wins the toss as there will be dew on the ground for sure which means the bowlers will find it tough to hit their lengths with the wet ball late in the evening and batting might just be a tad easier in the second innings.

The Pakistan selectors have picked some youngsters on the basis of their performances in PSL 3 and a couple of them might be playing their first international game for Pakistan tonight. Asif Ali, who was stunning for Islamabad United in the final match against Peshawar Zalmi, will surely be handed his first Pakistan cap and Hussain Talat is in line for his debut as well. If these two play, there will be a lot of eyes on him from the Pakistan cricket circles as they are tipped as the two next batting superstars of the country.

Pakistan may open the batting with Babar Azam and Fakhar Azam to slot Shoaib Malik at 3 and accommodate both Talat and Ali in the middle order and if that happens, Ahmed Shehzad, who has failed to show some consistency of late, will have to sit out.

There is no room for debate as far as the bowling unit is concerned as Mohammad Amir and Hasan Ali being the premier fast bowlers pick themselves and so do Shadab Khan and Mohammad Nawaz as they are the two specialist spinners in the squad and were really good form in the second half of the PSL.

Faheem Ashraf will be the all-rounder batting at no. 7 and the team management will expect some handy contribution from him both with bat and ball which he is perfectly capable of.

The West Indies squad might be missing the superstars, but there are some very talented players in there who have proved their worth in the CPL in the last couple of years. The likes of Andre Fletcher, Chadwick Walton and Jason Mohammed, who will also be leading the side, are tremendous hitters of the cricket ball and add to that the experience of Marlon Samuels and Denesh Ramdin, this is not a bad batting line-up.

Bowling wise, the two trump-cards for the visitors will be Kesrick Williams and Samuel Badree. While Williams was one of the leading bowlers in the previous edition of CPL, Badree has been the no. 1 bowler in the ICC T20 rankings in the past. Both are high skilled T20 bowlers and know how to outfox the batsmen. Somebody like Rayad Emrit is also a canny customer and his role in the middle overs will be important too along with the left arm spinner Veerasammy Permaul.

The prediction is for Pakistan to beat West Indies and take a 1-0 lead in the series. 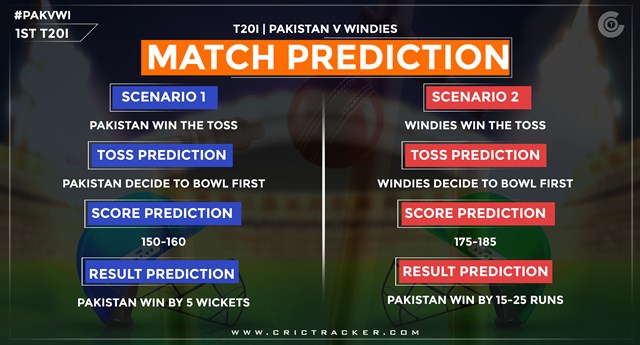