Deandra Dottin should be your captain for the third game in a row but what are the other options?

After a thumping defeat in the first T20I, Pakistan Women came close to defeating the Windies Women in the 2nd T20I that went into the Super Over. Deandra Dottin showed her supremacy in the one-over shoot out smashing a couple of sixes. Three of the 11 T20Is between the two teams have ended in a Tie and Windies Women won the Super Over on all the three instances. Out of the eight Tied matches in Women’s T20Is, three have been between Pakistan and Windies only.

In the 11 T20Is against Pakistan, the Windies Women won seven games other than the three Tied games. They will be hoping to continue their supremacy over the hosts and move into the ODI series with a 3-0 victory. Windies played with the same XI in the first two matches and could remain unchanged for the last encounter. Pakistan too might be unchanged after a decent match against the visiting team.

The third game of the 3-match T20I series between Pakistan Women and Windies Women will be hosted by the Southend Club Cricket Stadium, Karachi.

The two matches played at the Southend Club Stadium were perfect for the Women’s T20I format. The final match of the series could also witness scores in access of 130.

Javeria Khan was the leading run-getter for Pakistan during the Women’s WT20 with 136 runs including an unbeaten fifty. However, she started the series with scores of 19 and 26. The team will be hoping for a bigger knock in the final game. 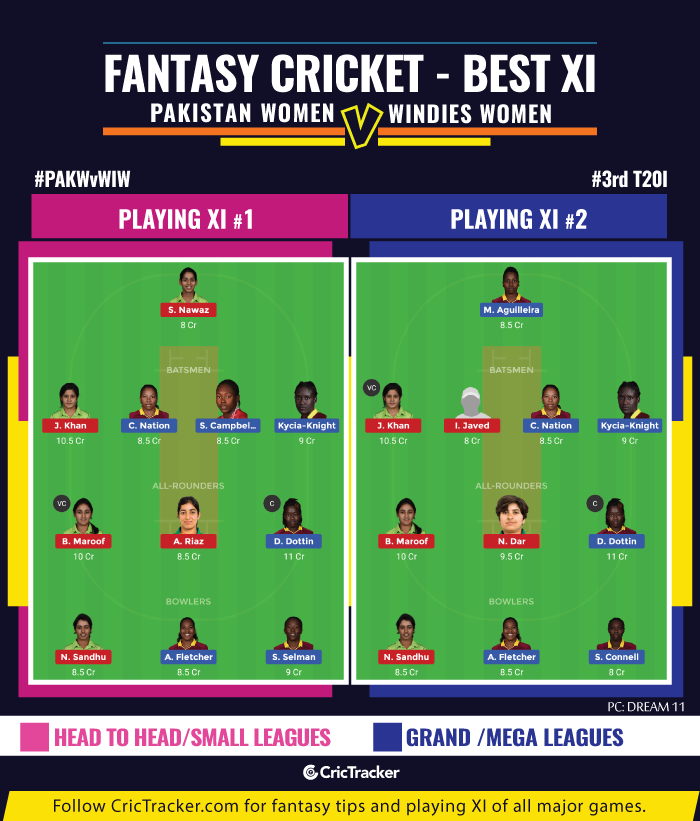 Windies Women are expected to complete a whitewash in the 3-match T20I series against Pakistan.