Steven Baard has scored three fifties in the six T20Is he has played.

The 1st game of the 2-match T20I series between Papua New Guinea (P.N.G) and Namibia will be hosted by the Central Broward Regional Park (CBRP) Stadium Turf Ground in Lauderhill, Florida.

This game could be streamed live on YouTube by USA Cricket.

Namibia registered their 3rd consecutive win in the United Nations Tri-series and moved ahead of the USA in the points tally. If not for the defeat in the first game against the hosts, Namibia would have topped the ICC CWC League Two 2019-22. Namibia is currently behind Scotland whose NRR is only 0.05 higher. Now Namibia will face Papua New Guinea in a 2-match T20I series in Florida.

Namibia has played seven T20I matches thus far and won all those seven. In fact, they have won 10 out of 11 International games in 2019 with the only loss came against the USA in the ongoing tour. Papua New Guinea would be hoping to end their losing spree at least in this 2-match T20I series. The PNG team lost each of their eight matches in the ICC CWC League Two and most of them have been close defeats.

Spells of rain were witnessed throughout the Tri-series in the afternoon but the weather forecast for this T20I series seems better. High temperatures are expected during the match timings with a bit of cloud cover.

The venue usually slows down as the game progresses. Since 2016, only once a team has managed to chase down the target in T20Is which was a target of 96 runs. Barring the Windies-India T20I in 2016, the teams have struggled big-time while chasing.

Christi Viljoen took a 5-wicket haul and a 4-fer in three T20Is and also had experience of playing Super Smash T20. He was dropped in the Tri-series but will be brought back due to his T20 exploits. Steven Baard has three fifties in six T20Is and scored his first fifty in the USA on Monday. Norman Vanua took 25 wickets from 17 T20Is and also scored 207 runs at an average of 20.7 in this format. Charles Amini also has similar numbers having scored 277 runs at 34.62 and took 12 wickets at an average of 18.

Assad Vala was quite important as a multiplier during the ODI matches. But in T20Is, he can only be made vice-captain that too in certain scenarios. 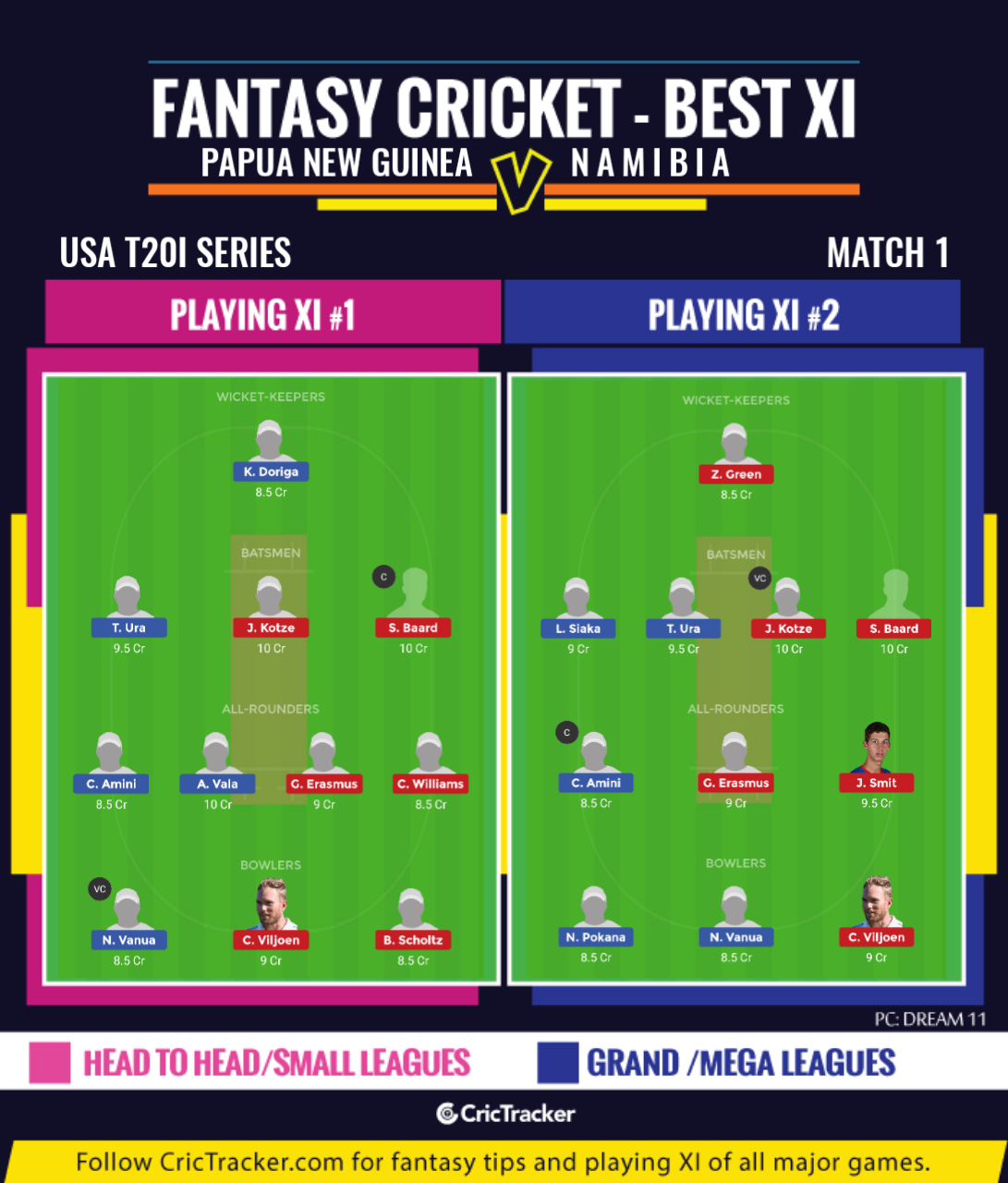 PNG might retain their XI from the Tri-series as the majority of them have performed well for them in the shorter format. Namibia is expected to make one change at least as they will bring in Christi Viljoen who was dropped in the ODI tri-series after the first defeat.

Namibia is expected to continue their winning run in T20Is.