Andre Fletcher and Tom Kohler-Cadmore are good options to make C or VC.

The 13th match of the Abu Dhabi T10 league will be played between Pune Devils and Bangla Tigers at Sheikh Zayed Stadium, Abu Dhabi.

Pune Devils will face the Bangla Tigers in the Super League contest of the Abu Dhabi T10 league on Monday. Pune Devils finished 4th in Group B with 2 points after winning one and losing 2 matches. After wrapping up a comprehensive victory over Deccan Gladiators in their tournament opener by 7 wickets, Pune Devils then lost back to back matches due to some ordinary bowling.

They need to find the right combination for the Super League stage and back to the winning ways. On the other hand, Bangla Tigers’ story isn’t much different in this competition, they too have won one and lost 2 matches, they finished 3rd in the Group A standings with 2 points. They are coming off a massive loss over Northern Warriors by 30 runs in their final league game. Lack of death bowling options causing the games for them. Both the teams have got plenty of firepower in their batting order and whoever bowls well will emerge out victorious.

It will be partly cloudy in Abu Dhabi with the temperature ranging between 21 and 22 degrees Celsius and the humidity will be 74 percent. There is no chance of precipitation for this match.

The surface hasn’t done much since the start of the tournament. Batters are having full control over the bowlers. In the last 4 matches, the team batting first has won 3 of them, which indicates there is some pressure on the batters while chasing. Anything above 120 is a competitive score on this wicket.

Tom Kohler-Cadmore has scored two consecutive half-centuries in the last 2 matches and he leads the list of most runs scorer for Pune Devils, scoring 127 runs in 3 matches at an average of 63.5 with a strike rate of 215.25.

Kennar Lewis after putting up an extraordinary show with the bat in the first game against Deccan Gladiators haven’t fired in the last couple of games. He has scored 65 runs in 3 matches at a strike rate of 150.

Wicket Keeper Chadwick Walton is another good striker of the ball in the Pune Devils line up, he has scored 50 runs in 3 matches at an average of 25 with a strike rate of 166.66.

Bangla Tigers skipper Andre Fletcher is consistently scoring runs for his side. He is the leading run-scorer for Bangla Tigers, scoring 116 runs in 3 matches at a strike rate of 193.33.

Chirag Suri has looked good with his stylish batting and has batted really well in the middle and death overs for Bangla Tigers, scoring 61 runs in 2 innings at an average of 61 with a strike rate of 265.21.

Karim Janat has the knack of picking up wickets at regular intervals. He hasn’t given away too many runs in this tournament. In 3 matches he has picked up 4 wickets at an economy of 10.83. 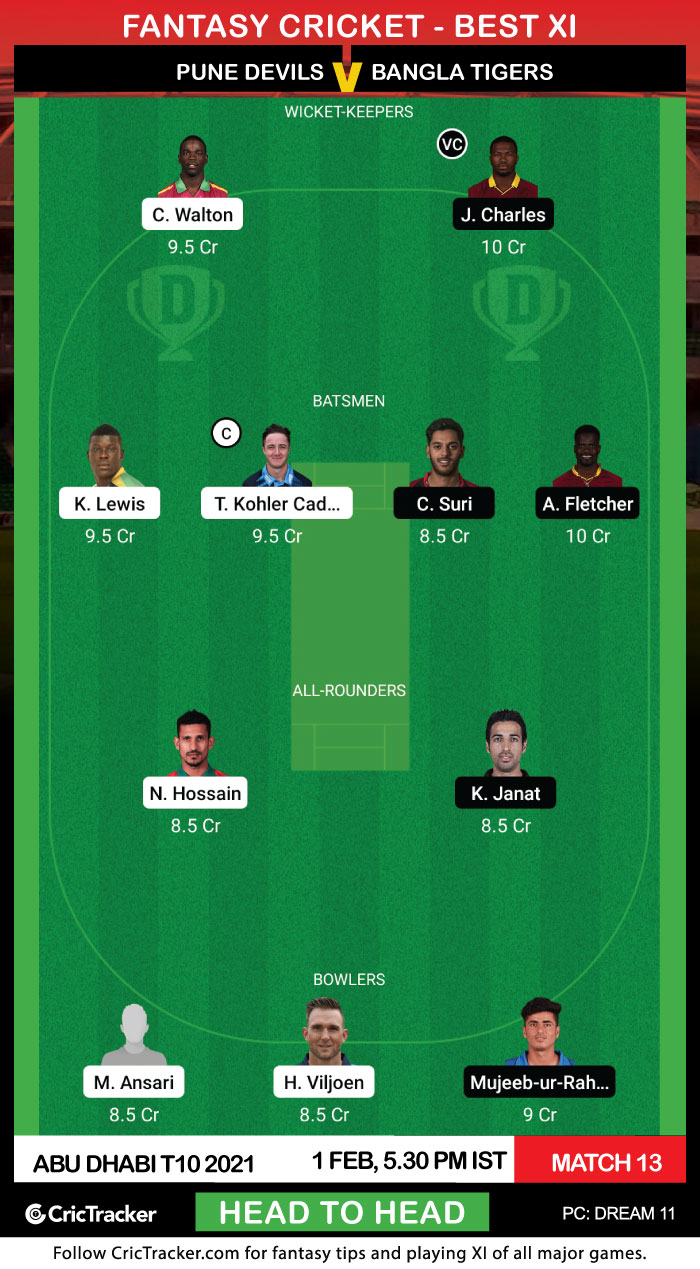 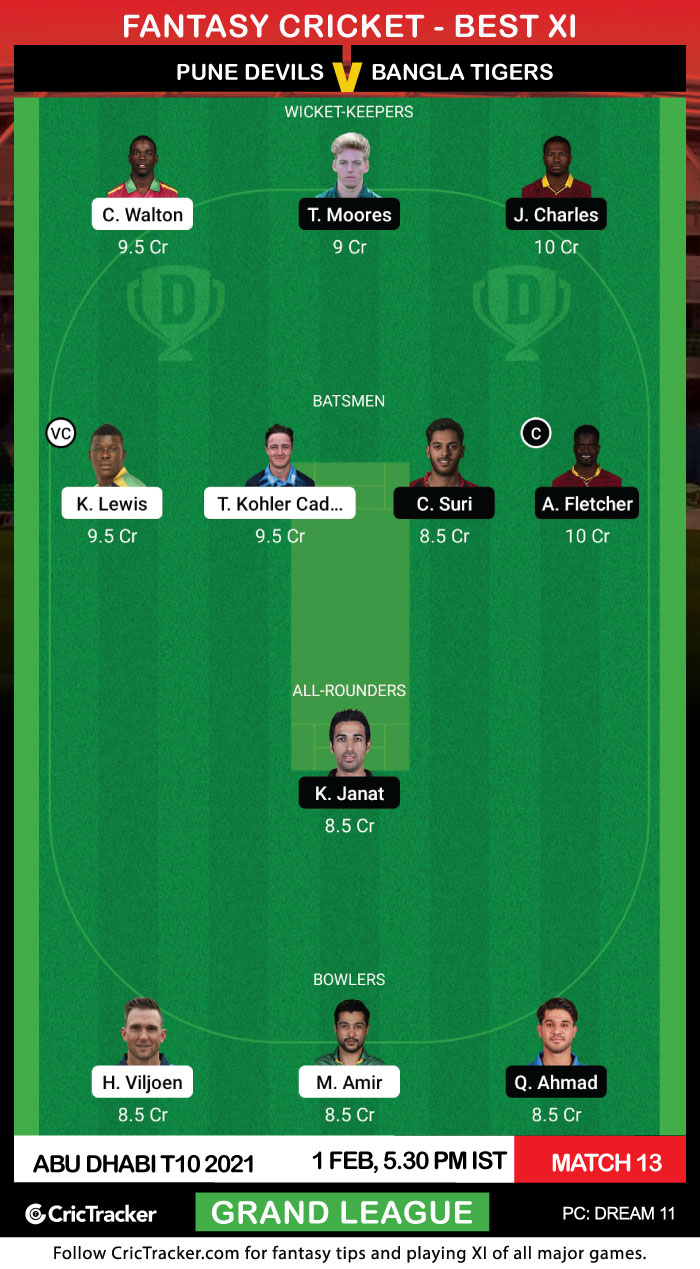 The top 3 batters on both sides are big hitters and can play long innings once they get settled. Hence avoid picking  more than 2 all-rounders in your Dream11 fantasy team.

Bangla Tigers are expected to win this match.