On-paper strength keeps Deccan Gladiators ahead of their opposition.

The 2nd match of the Abu Dhabi T10 League 2021 season will be played between Pune Devils and Deccan Gladiators at the Sheikh Zayed Stadium in Abu Dhabi.

This match will start at 07:45 PM IST (06:15 PM local time). It will be live on Sony Sports Network and live streaming is available on Sony LIV and Jio TV.

Pune Devils and Deccan Gladiators will take on each other in the second match on the opening day of Abu Dhabi T10 League 2021 season. There are eight teams, divided into two groups with each team playing three matches in the group stage before moving into Super League. Pune Devils have some big names from the shorter format which adds a very strong balance into their squad. The experience of Mohammad Amir, Chadwick Walton and Hardus Viljoen will surely make things easier for the Devils coming into this first game against a strong opposition.

On the other side, Deccan Gladiators finished the previous season as runners up and would be looking to kick this season off with a win as well. The Gladiators have some of the biggest superstars of the game like Kieron Pollard, Mohammad Shahzad, Imran Tahir and Sunil Narine, which makes them one of the strongest teams of the tournament. In addition, they have some young blood, which gives them the perfect mixture of fearless youth with experienced minds. With such a flexible and strong side, Gladiators would like to win the title this time, which they missed it last time after being so close.

There will be a clear sky throughout the opening day of the Abu Dhabi T10 League 2021 season. The temperature will be hovering around 21-22 Degree Celsius with zero chances of rain during the match time.

The pitch for the first game of the season is clearly a better one for the batsmen. It might give some seam movements in the initial part of the innings, but it will be all about batsmen after the first two overs. The team batting second will have a clear advantage with a target in front of them.

(Will be updated if there is any)

England players will be staying back for the whole IPL as it stands: Chris Silverwood

Kieron Pollard is a well known white ball superstar. He has been in brilliant form last year wherever he played. He had a strike rate of 204.9 in T20s last year. He was also scoring at the rate of 197.1 for West Indies last year. All of that being said, he also had an impressive last season in T10 Abu Dhabi where he was striking at the rate of 152.7.

Mohammad Shahzad is yet another big name in this format of the game. He has 285 runs at a strike rate of 216 in his T10 career. He will open the innings once again and has a higher probability of scoring the most number of runs.

Mohammad Amir had a brilliant Lanka Premier League recently and is coming off a brilliant white ball performance last year. He took 36 wickets throughout the year at an average of 21.6.

Tom Kohler-Cadmore has a strike rate of 141.18 in his T10 career. He will open the innings for the Devils most probably.

Chadwick Walton will open the innings for Pune Devils and has a strike rate of 183.72 in his T10 career. 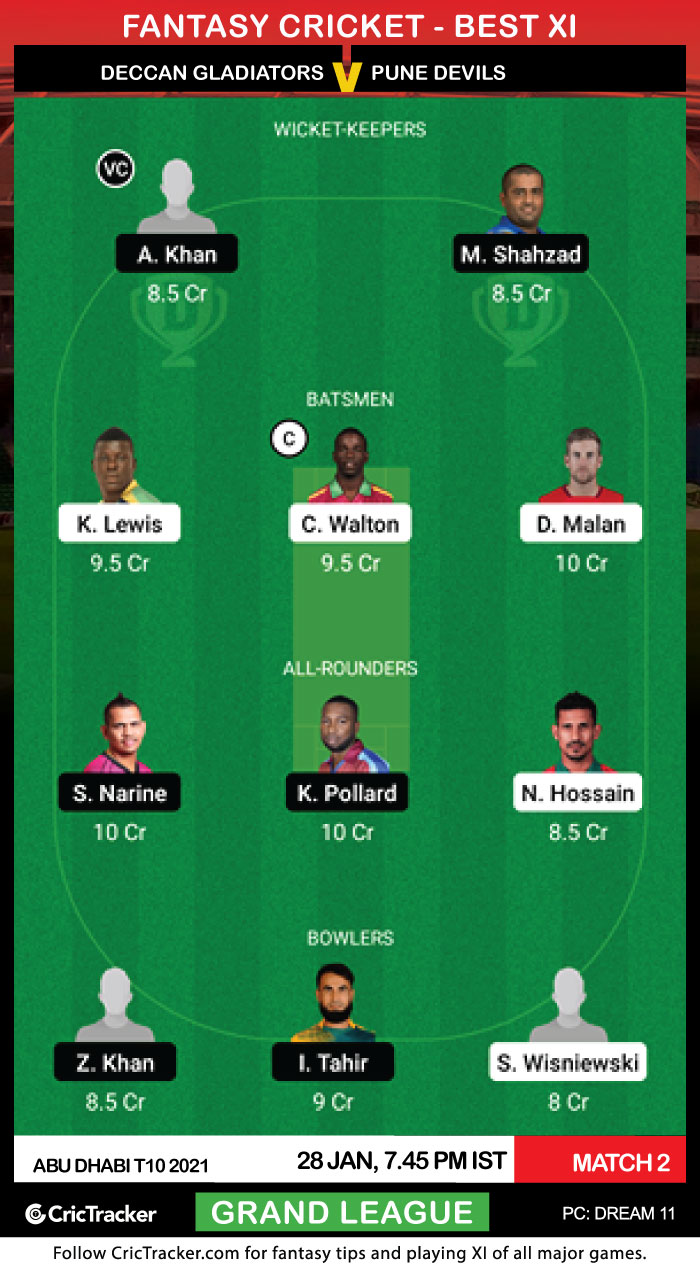 Sunil Narine can be dangerous with both bat and ball for the opposition. Due to his all-round ability, it is advisable to take him in both of your Dream11 Fantasy teams.