Though this is a practice match both the teams will field 11 players each and not 15. All PM XI matches in Australia are played the same way.

The T20 practice match between Prime Ministers XI and Sri Lanka will be played at the Manuka Oval in Canberra.

Sri Lanka will begin their short Australia tour with a practice game against Prime Ministers XI on Thursday. They are scheduled to play three T20 Internationals on this tour starting from October 27. The team is coming off a spectacular 3-0 whitewash of the number 1 T20I side Pakistan in their den and will be oozing with confidence. They will be keen to start their tour well ahead of the main series.

As for the Prime Ministers XI, some top T20 stars will be in action including Chris Lynn who has been left out of Australia squad for Sri Lanka and Pakistan series. Interestingly, Peter Siddle and Daniel Christian have been named co-captains for this match and they will lead the team in the middle. The players also have a great chance to stake their claims for the national squad ahead of the T20 World Cup next year at home.

There is no rain in the forecast in the Australian capital on Thursday. The conditions will also be great for the game of cricket to take place. The temperature will hover around 19-21 Degrees Celsius during the match according to AccuWeather.

Only a solitary T20I has been played so far at this venue between Australia Women and New Zealand Women. The scores were low in this match. Also, a couple of BBL matches were played last season here and both were affected by rain. However, with this being the start of the home summer, the pitch is expected to be a good one for batting and full of runs.

Note: Though this is a practice match both the teams will field 11 players each and not 15. (All PM XI matches in Australia are played the same way). Hence, we are providing the playing XIs.

Chris Lynn will be keen to prove himself after being sidelined for Sri Lanka and Pakistan T20Is. He should be picked in your Dream11 Fantasy side. Ben Cutting and Christian will also be crucial for PM XI.

Bhanuka Rajapaksa was Sri Lanka’s star in the recent series against Pakistan and he will be definitely given a chance to get acclimatised to Australian conditions. Kusal Perera and Malinga are two other players who should be picked.

Suggested Playing XI No.1 for Fantasy Cricket for Dream11 Fantasy:

Suggested Playing XI No.2 for Fantasy Cricket for Dream11 Fantasy: 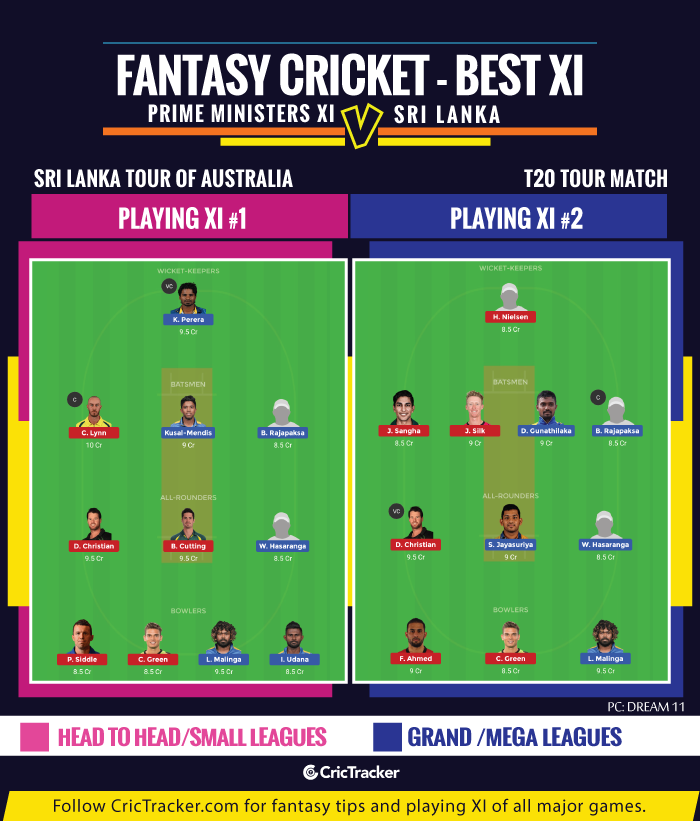 Ben Cutting succeeded as an opener in the BBL for his team. He might open the innings in this game as well and if that is the case, he can be made the captain of your Dream11 Fantasy side.

Sri Lanka are expected to win this match.