This is a must-win game for Quetta Gladiators.

It is the clash between the two contrasting sides in the match 25 of the ongoing Pakistan Super League (PSL) on Wednesday. Multan Sultans who have already qualified for the playoffs face and are the table-toppers will face the defending champions Quetta Gladiators. Unfortunately, the Sarfaraz Ahmed-led side has got into a bit of rut losing four matches on the trot.

With only two matches left in the league stage including this one, the Gladiators will have to make sure they win both in order to make it to the playoffs. They also lost to the Multan Sultans in the previous face-off and would want to avenge for that defeat. However, for that to happen, the likes of Jason Roy and others will have to fire with the bat which hasn’t been happening.

The forecast in Lahore for this match is not so encouraging. It will be cloudy for the majority of the day before the heavens are expected to open not once but many times during the day. There are 51% chances of rain during the match as well and as of now, it looks unlikely that the game will take place. However, if the rain subsides, a shortened game might take place.

The surfaces at the Gaddafi stadium have been brilliant to bat on so far and despite the rain forecast, the pitch should stay true to its nature. Also, the team winning the toss is expected to bowl first with DLS method likely to come into play.

Having qualified for the playoffs, the Sultans might think of resting their key players. However, they would be eager to seal their top position as well. Another win will make sure they will end the league stage as the table toppers. James Vince has found his mojo at the right time for them and along with Zeeshan Ashraf, it will be his job to get the team off to a good start.

The middle-order comprising of Rossouw, Masood and Moeen Ali is also in good nick while Shahid Afridi has also tonked the ball when needed. The likes of Imran Tahir, Junaid Khan, Sohail Tanvir have been doing their job with the ball as well.

The Gladiators have one of the best teams going around with some of the best T20 players across the world playing for them. Roy and Watson can blow away any bowling line-up and it is only a matter of time when they click together. With this being the must-win encounter, expect the defending champions to come hard at the opposition.

Having said that, the skipper Sarfaraz Ahmed’s form in the middle-order is concerning for them even as Azam Khan has struggled immensely after a bright start to the season. The bowling attack comprising of Mohammad Hasnain, Mohammad Nawaz among others are expected to deliver as well.

The prediction is for the Quetta Gladiators to win the match. 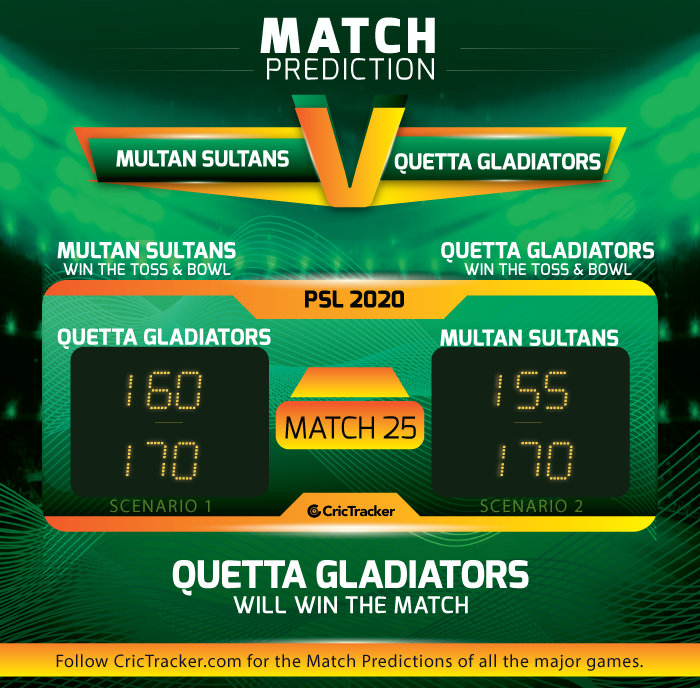