Peshawar Zalmi must win this game to seal their place in the playoffs.

We are at the fag end of the tournament and each game from here is a going to be huge in the context of the playoffs. While Multan Sultans have qualified and are sitting comfortably at the top of the table, all the other five teams still have a chance of making it to the top four. Peshawar Zalmi are among the top ones to make it to the playoffs.

However, they need to win their last league encounter against a rampaging Multan Sultans line-up. Multan Sultans last lost a game back on February 22. Since then, they’ve had four wins and two washouts. Moreover, they’ve been dominant in the way they’ve played and have run through the opponents as well.

Meanwhile, Peshawar Zalmi have been very inconsistent throughout this season. They’ve won and lost alternately on multiple instances. In their last four games, they’ve won two and lost two. Despite the batsmen getting big scores at times, the bowling has failed to defend the score like the last game where they failed to defend 187. Hence, Peshawar need to step up and raise their game in this must-win situation. A win will ensure them a place in the top four.

Corona Virus has become the talk of the town and the National Stadium in Karachi will have empty stands. However, it has produced some excellent pitches for batsmen. They’ve enjoyed the conditions and have got big scores. The average score batting first has been 150 in this tournament at the National Stadium in Karachi. Weather-wise, it seems all clear and there is no rain around to threaten the game. The temperatures should range between 21 and 24 degrees.

Skipper Shan Masood and Zeeshan Ashraf have been inconsistent at the top of the order. However, the middle-order has really come together nicely. James Vince and Rilee Rossouw seem to be in good form. The latter is the leading run-getter of the team as he’s made 189 runs. Vince may have batted in just five innings but is hitting the ball really well and has a strike-rate of 166.66.

Moeen Ali and Shahid Afridi lend that all-round balance and can have an impact with both bat and ball. Imran Tahir has led the charge with the ball. He’s taken 10 wickets at an average of 15.60. Sohail Tanvir has been decent too, picking up seven wickets from as many games.

Kamran Akmal’s form seems to have tapered off a touch. Tom Banton has struggled at the top of the order too. Meanwhile, it’s Haider Ali and Shoaib Malik who’ve been very good in this tournament so far. They have good averages and strike-rates. The trio of Liam Livingstone, Lewis Gregory and Carlos Brathwaite have blown hot and cold and haven’t really hit their straps just as yet.

Skipper Wahab Riaz seems to be leading the charge with the ball from the front. He’s picked up 10 wickets and looks to be in good rhythm. Hasan Ali has been inconsistent but is slowly getting back to his best.

The prediction is for the Multan Sultans to win the match. 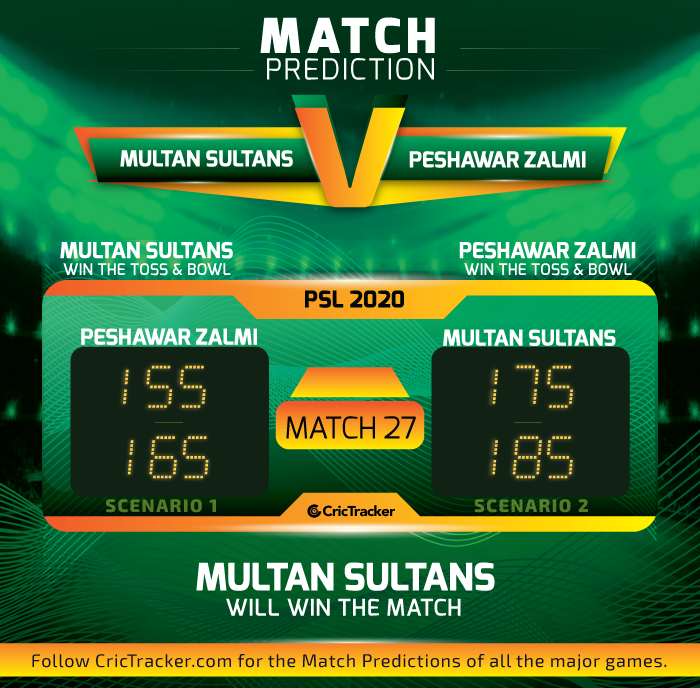