Both Qalandars and Sultans have failed to make the playoffs in the previous editions of the PSL.

The Lahore Qalandars have a win percentage of 30.55 in the PSL with a mere 10 victories from 36 matches. Every other time the team has managed to end at the bottom of the points table. This year the side will be captained by Sohail Akhtar and would be hoping to put up a better show. Their opening match is against the Multan Sultans in the second of Friday’s doubleheader in Karachi.

The Sultans started their PSL journey in 2018 and have floundered thus far with a win percentage of 36.84. In fact, they have also lost twice at the hands of the Qalandars, once each in 2018 and 2019. Like the Qalandars, even the Sultans, led by Shan Masood, would be looking to perform better. A win for either side at the National Stadium will come as a massive confidence booster at the start.

The pitch in Karachi is known to be a fairly decent one for batting. A lot of demons aren’t expected in the night game. There may be a bit of dew and hence, batting second should be the way forward for the teams. There are no rain predictions with the conditions being hazy. The temperature will be around the 24 degrees Celsius mark. The humidity won’t be high with the numbers in the mid-20s.

The Qalandars’ top-order isn’t short of firepower. Chris Lynn and Fakhar Zaman can take advantage of the fielding restrictions without much fuss. Skipper Sohail Akhtar is also no less efficient with his power-hitting skills. The experienced Mohammad Hafeez brings in calmness in the batting lineup.

Dane Vilas and Ben Dunk are also seasoned campaigners. Samit Patel and David Wiese are coming off campaigns in the BBL and BPL respectively. The team has an efficient bowling attack, especially in the pace department. The pace trio of Shinwari, Afridi and Rauf can rip any batting lineup apart.

Shan Masood and Rilee Rossouw are expected to open the batting for the Sultans. Rossouw can turn out to be a crucial member if the Sultans are to turn their fortunes around. Moeen Ali is also available and he may get a chance. Ravi Bopara’s role with both bat and ball will be of importance.

It’s also a chance for the young Rohail Nazir to show his class. Khushdil Shah would want to perform and stake his claim back into the Pakistan lineup. Shahid Afridi is at the fag end of his career, but he hasn’t run out of gas. A lot will depend on Tahir’s spell along with the trio of Junaid, Irfan and Tanvir. 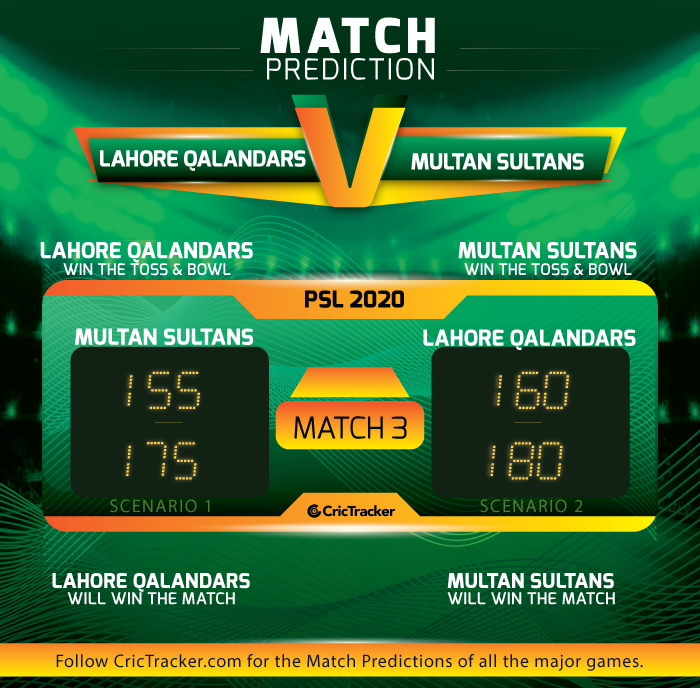