Picking top-order batsmen would be ideal with the prospect of rain on the cards as well.

The 2nd Semi-Final of Qatar T10 League 2019 will be played between the Swift Gallopers and Flying Oryx at West End Park International Cricket Stadium, Doha.

The second semi-final features table-toppers, Swift Gallopers against the Flying Oryx in a repeat of Saturday’s clash. Their league phase encounter saw Swift Gallopers trash the Oryx by 27 runs, courtesy of a masterful bowling performance. While the Gallopers won four out of their five games in the league phase, Flying Oryx managed to sneak into the top four as only NRR separated them from the Pearl Gladiators.

Both sides have experienced players although the manner in which Swift Gallopers have gone about in the league phase makes them the hot favourites for this game. Nevertheless, Hussain Talat and co should put up a good fight with the Flying Oryx still due for a complete performance with bat and ball in the Qatar T10 League 2019.

Showers are expected during the course of the match which could result in a washout. The temperature will hover around 25 degrees Celsius with a decent cloud cover of 76% throughout the duration of the match. There is a brisk wind also blowing in from one end with humidity of 76% expected, according to AccuWeather.

A decent wicket awaits the two sides with the average first innings score being in excess of 100. While there has been some uneven bounce throughout the tournament, the batsmen have enjoyed the conditions as well. In spite of this being a must-win game, gone are the days when one would opt to bat first in a crunch game and pile on the runs with the record in the tournament also suggesting the same.

Kamran Akmal has led his side valiantly with quick-fire knocks at the top of the order. The Pakistani wicket-keeper has 110 runs to his name at an average of 22.25. His strike-rate of 161.7 is also commendable and holds him in good stead.

Ali Imran’s two outings for the Gallopers have been fruitful. With 59 runs to his name, Imran also put in a good shift with the ball in hand against Flying Oryx with figures of 1/16. Hussain Talat has done with both bat and ball for the Oryx. With 82 runs and an economy of 8.29 with the ball, Talat is surely one to watch out for in the Dream11 contest. 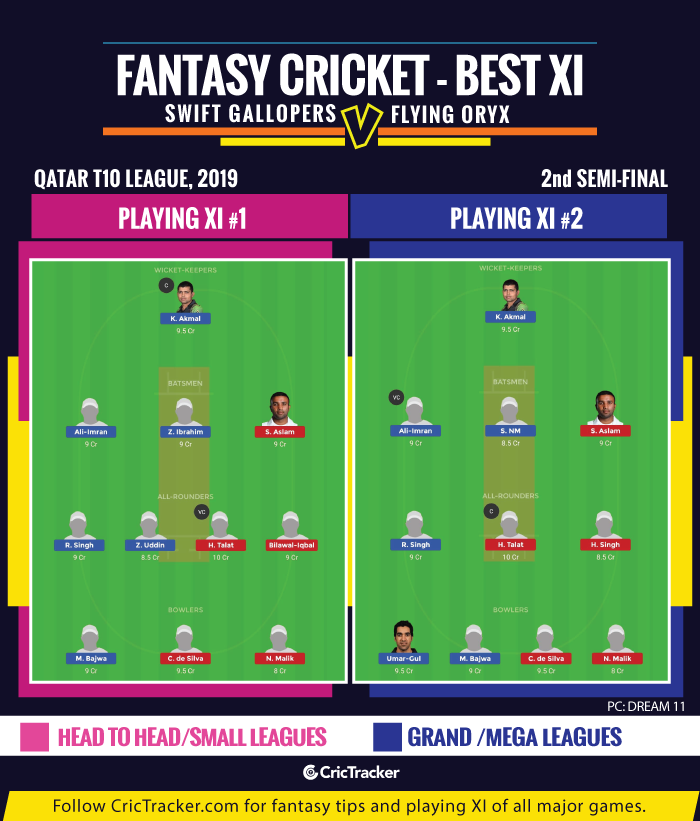 Picking top-order batsmen would be ideal with the prospect of rain on the cards as well. Hussain Talat and Kamran Akmal are more than handy options and should prove to be viable punts in this Dream11 contest.

Swift Gallopers are the favourites to win this match.