Naveed Malik has picked up five wickets across the three matches he played thus far.

The 3rd Place Play-off match of the Qatar T10 League 2019 will be played between Desert Riders and Flying Oryx at the West End Park International Cricket Stadium in Doha.

Desert Riders and Flying Oryx will clash off in the 3rd place play-off after the semi-finals were abandoned without a toss. Desert Riders finished 3rd in the points table as they won three matches which include a victory against the table-toppers Swift Gallopers. They lost only to Falcon Hunters while the match against Pearl Gladiators ended without a result. On the other hand, Flying Oryx won the tournament opener against the Gladiators. However, they lost three of their next four matches played including a washout against Heat Stormers.

The West End Park Stadium in Doha could be under showers on Monday but everything is expected to get cleared before the evening match.

For the knockouts, we are likely to have a fresh pitch used. Since there was rain on Sunday, the track is likely to retain a bit of moisture. The recent matches of the tournament have been a mixture of high-totals and low scores. Teams would be aiming to get 110 and more to have a chance of winning while batting first.

Hussain Talat and Mohammad Hafeez will be crucial in this match that too as captain as vice-captain. The captains of both the teams are likely to bowl two overs and bat in top three for their teams. The chances of them being the top-performers are quite high. Naveed Malik has picked up five wickets across the three matches he played thus far. Sohail Tanvir also took five wickets in this tournament thus far. 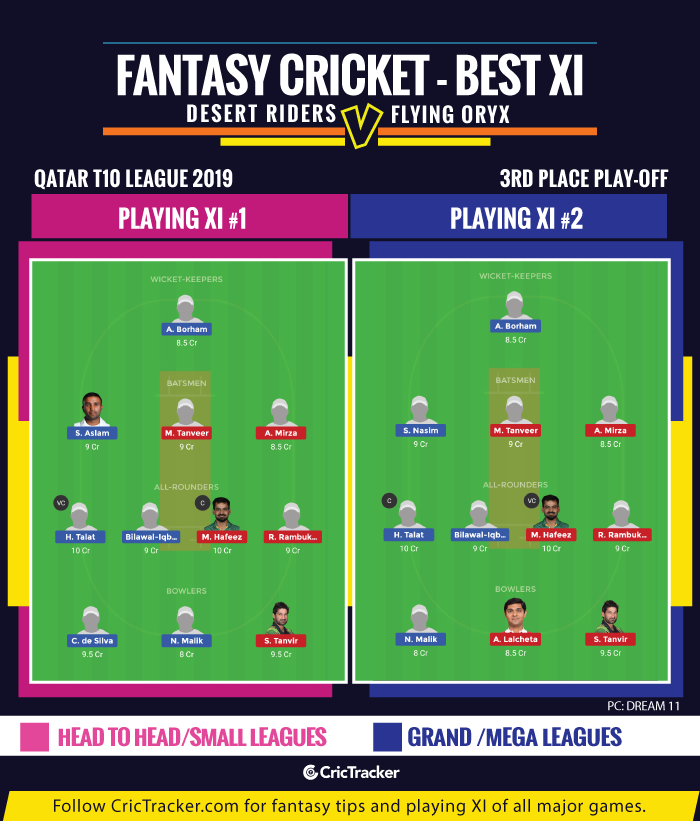 Both the teams have got few players from Pakistan and Sri Lanka in the last stage of the tournament. All those players are expected to be available for this fixture.

Desert Riders are expected to win this match and finish at 3rd place.