Muhammad Tanveer is currently the leading scorer in Qatar T10 League and is playing consistently well. He will be an important player for any Dream11 Fantasy Side.

The 13th match of the Qatar T10 League 2019 will be played between Desert Riders and Flying Oryx at the West End Park International Cricket Stadium in Doha.

Desert Riders got off to a great start to their tournament with two consecutive wins but lost their previous game against Falcon Hunters. However, they would be eager to get back on the winning track in their last league match. Riders boast a strong batting line up with the likes of Mohammad Hafeez, Adnan Mirza and Muhammad Tanveer.

In bowling, they have Sohail Tanvir, Ajay Lalcheta, who have done a good job with the ball so far in the ongoing tournament for their side. Stormers are still due to taste their first win Qatar T10 league and have lost all of their league matches until now. It will be a must-win game for them if they want to revive their chances in order to qualify for the semi-finals.

The track is expected to go in favour of pacers, who are able to get some swing upfront although the change of pace has also played an important role. Chasing will be preferred by either side winning the toss with a score in excess of 100 being a very competitive one on this surface.

(WIll be shared when there’s an update)

Muhammad Tanveer is currently the leading scorer in Qatar T10 League and is playing consistently well. He will be an important player for any Dream11 Fantasy Side. Owais Ahmed will be another important player to watch out in the upcoming match. 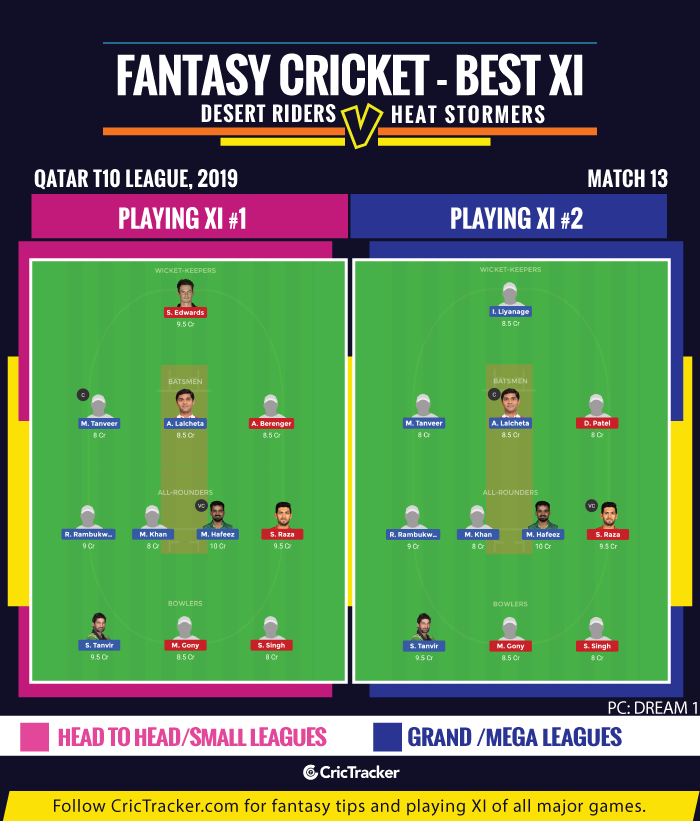 Mohammad Hafeez is known as one of the good all-rounders across the globe. He has a great experience of playing in international cricket. But currently, he is struggling with the poor form with the bat and ball. Looking forward to his form, he would be a risky pick but will be worth for any Grand League Side.

Desert Riders are expected to win this match.