The in-form duo of Hussain Talat and Kamran Akmal, who are available for 9.5 credits each, are viable options for this Dream11 contest.

The 14th Match of Qatar T10 League 2019 will be played between the Swift Gallopers and Flying Oryx at West End Park International Cricket Stadium, Doha.

The final league phase day gets underway as Swift Gallopers and Flying Oryx look to seal a top-four finish in the Qatar T10 League 2019. Although both teams are placed in consecutive spots on the table, Swift Gallopers has been sensational this season. While they are already assured of a place in the top four, the Gallopers batting unit has already registered the highest score in the league with 153 runs.

On the other hand, Flying Oryx has won only one game with Hussain Talat unable to inspire them in their remaining games. Their solitary win came in Match 1 and are searching for a second win since then. Swift Gallopers will be expected to make quick work of their opponents although the added incentive of sealing a semi-final place will boost the Flying Oryx

The weather forecast is clear on Saturday with the temperature hovering around 24 degrees Celsius. A heavy cloud cover of 74% is expected with humid conditions are on the cards, according to AccuWeather. The conditions shouldn’t change too much during the course of the match.

The pitch has something in it for both the batsmen and bowlers with scores of around 100 being a fairly common sight. Although the surface has a green look to it, change of pace is the key for the faster bowlers. Chasing is the preferred option upon winning the toss considering the nature of the format

Kamran Akmal and Zaheer Ibrahim have been brilliant for the Swift Gallopers this season. While Akmal has 85 runs to his name with a strike-rate of 160, Zaheer Ibrahim’s tally of 104 is second only to Mohammad Tanveer. Another individual who has stood out is Hussain Talat, who has scored 77 runs including a fifty. With his bowling ability also being effective on this surface, he should put in a good shift with bat and ball. 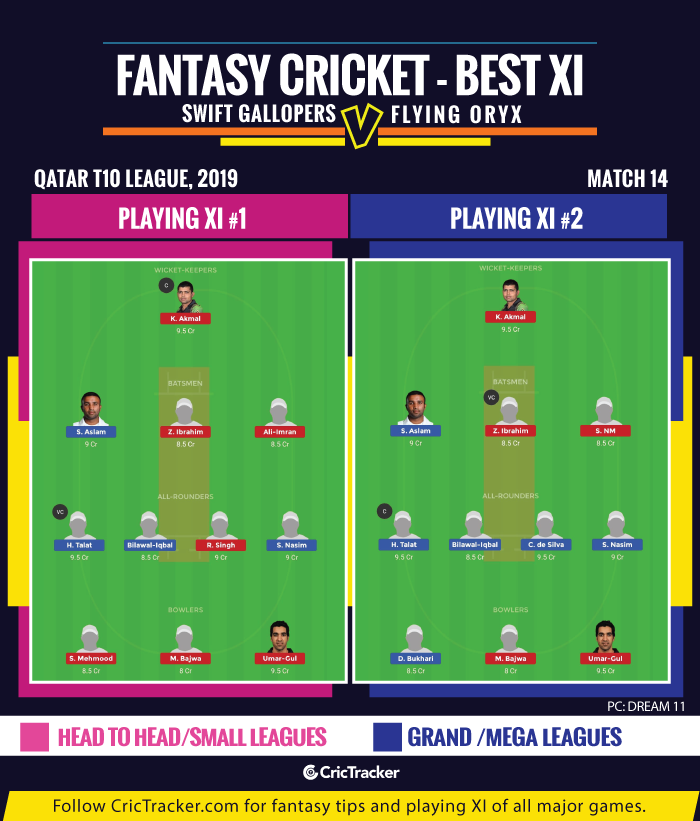 Top-order batsmen are critical to any team’s success, especially in the T10 format. The in-form duo of Hussain Talat and Kamran Akmal, who are available for 9.5 credits each, are viable options for this Dream11 contest.

Swift Gallopers are the favourites to win this match.