The 5th match of the Qatar T10 League 2019 will be played between Falcon Hunters and Swift Gallopers at the West End Park International Cricket Stadium in Doha.

Falcon Hunters made a winning start to the Qatar T10 League as they won a thriller on Sunday night against Heat Stormers. Salman Butt anchored the chase with an unbeaten 27-ball 39 which included a last-ball six when Hunters needed five runs to win. They will now face Swift Gallopers on Monday night. The Gallopers began with a defeat against Desert Riders. The Kamran Akmal-led team finished with only 93 in their 10 overs which was chased down comfortably by the Riders. Both the teams have International players in their batting line-up who could be seen scoring big.

The West End Park Stadium could face showers on Monday and a shortened match is expected.

The pitch at the West End Park didn’t show any signs of slowing down on Sunday in the night match. The target of 104 was chased down in the 2nd match of the day. Unless the same pitch is used on Monday, we might not see any slowing down of the pitch. Even targets around 110 could be seen chased down.

Kamran Akmal has been amongst runs in all formats recently and is likely to be the top performer for his team. He scored a 13-ball 29 in the first match he played on Sunday. Salman Butt didn’t show any urgency in the first match which could help him score runs consistently. Hong Kong’s Babar Hayat can smash big hits and can be a utility pick if the top-order depart early. Taimoor Sajjad scored 301 runs and bagged 13 wickets across 12 T20Is for Qatar. 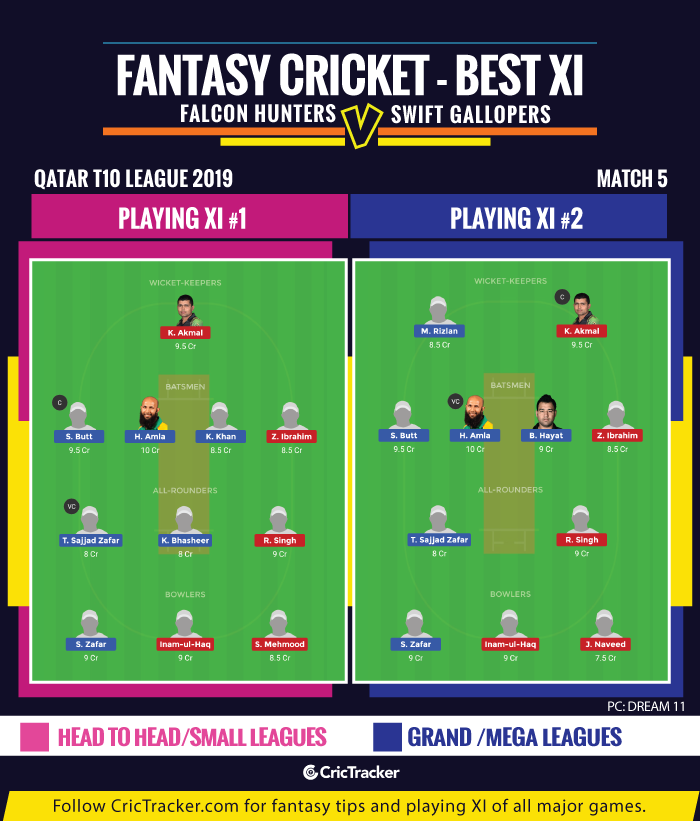 Both Falcon Hunters and Swift Gallopers fielded with star players in their respective first matches as players got NOC from the respective country boards in time. Hence, we might not see any major changes for the upcoming matches unless new players join.

Falcon Hunters are expected to record their 2nd consecutive win of the tournament.