Here's the Fantasy XI for the game between SRH and KKR.

This CrickingDuels Fantasy guide is for the second qualifier of the ongoing Indian Premier League (IPL) season which will be played between Sunrisers Hyderabad (SRH) and Kolkata Knight Riders (KKR). It will be the last opportunity for both the teams to stake their claims for the title clash even as the Chennai Super Kings (CSK) is sitting pretty awaiting their opponents in the final. However, the home advantage will be with the KKR having won their recent game against the Royals at the same venue itself.

The teams come into this encounter in contrasting forms. While the Orange Army has lost four consecutive matches, the Men in Purple and Gold have won the same number of encounters. Though the hosts wouldn’t be taking things for granted and will have to play their best cricket in order to trump the visitors. Kane Williamson, on the other hand, would be hoping that his boys put up a decent show and beat the KKR. Here we bring to you the CrickingDuels Fantasy guide for the game:

Kane Williamson and Shikhar Dhawan are the two batsmen from SRH I am picking keeping faith on the duo of doing well. They got out rather very early in the qualifier against Chennai and would be raring to make amends in the must-win encounter. Chris Lynn and Robin Uthappa are the remaining two batters in my line-up. While Lynn has been playing the waiting game this season, the latter has been in indifferent form strangely. It will not be easy for the duo to tackle the Hyderabad bowling but the champions are known to find ways in difficult circumstances.

I am not going with any of the all-rounders in SRH team which might look strange. Sunil Narine and Andre Russell are enough for me to rake the points in this department. While to have the former would be a crime given that his batting is a bonus and his bowling is exceptional, Russell won the game for them single-handedly with a superb blitz of 49 runs off just 25 balls.

Here I am preferring to go with Shreevats Goswami as he has got the licence to tonk the ball from word go. In the recent encounter against the same team, he had got his side off to a great start and would be tipped to do the same again. Dinesh Karthik is also a good option here as he is in great form and is fresh off a half-century in the eliminator against the Rajasthan Royals (RR).

Prasidh Krishna has impressed me a lot with his death bowling skills and has a chance of getting wickets in the last few overs. Kuldeep Yadav is another bowler in my team who has found his groove at the right time in the tournament and is fresh off his four-wicket haul. Rashid Khan and Siddarth Kaul are the two dangerous players and possess the ability to run through the batting line-up. Their team’s fortunes also will depend on them if they are to qualify for the final of the tournament.

Note: You can also join the Hybrid Fantasy League introduced for the first time by CrickingDuels. 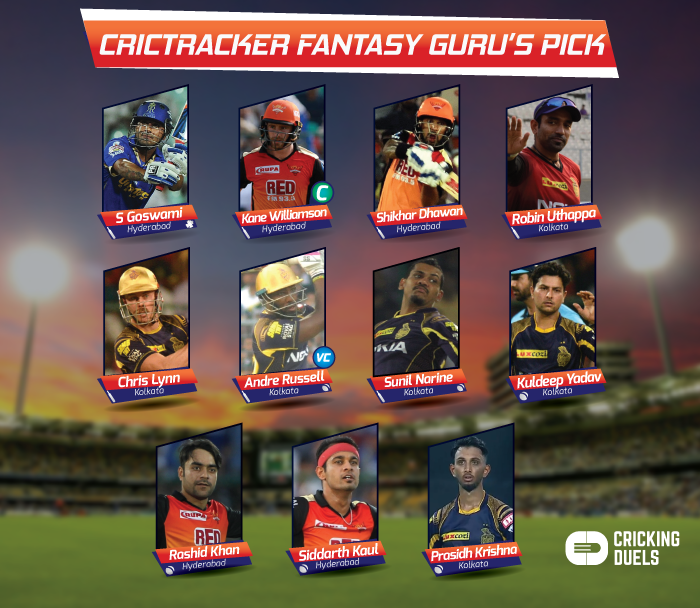