Quiz: How well did you follow CSK during IPL 2020?

Quiz: How well did you follow CSK during IPL 2020?

Did you follow CSK's games throughout IPL 2020? Then, take our quiz. 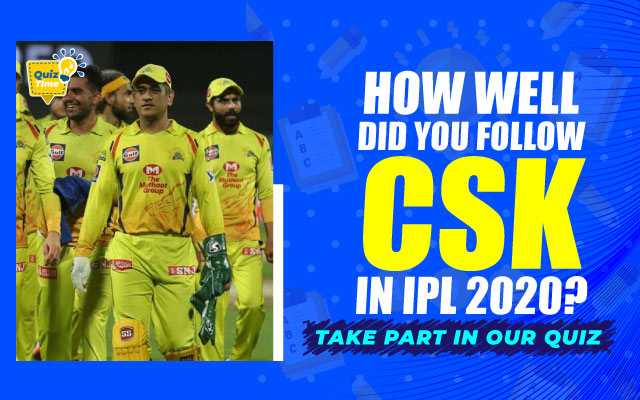 The 2020 Indian Premier League (IPL) turned out to be a nightmare for the Chennai Super Kings and their fans as they ended the competition at No.7 position. The Chennai franchise was part of ten editions of IPL before 2020 and made it to the playoffs/knockout stage in each of those ten seasons. The senior players Suresh Raina and Harbhajan Singh opted out of the tournament owing personal reasons. The franchise did not seek replacements and was short of an Indian batsman in the middle-order and also an off-spin option.

Kedar Jadhav, who was considered as a replacement for Raina in the middle-order, turned out to be a burden to the team. In CSK’s worst ever season, their skipper MS Dhoni registered his worst-ever IPL edition with the bat. Dhoni batting ability seemed to be on the decline after him being away from the sport for nearly 15 months.  However, Ravindra Jadeja’s batting in the death overs came in as a surprise for them. The all-rounder recorded his best IPL season ever with the bat and played vital knocks through the tournament.

His innings towards the end against Kolkata Knight Riders cost the Eoin Morgan-led squad a place in the playoff as they fell short narrowly on net run-rate. Ruturaj Gaikwad was the star towards the end for CSK as he scored fifties in the team’s last three matches; all of them coming in wins. This helped the franchise avoid finishing with a wooden spoon. Ambati Rayudu and Faf du Plessis did their part with the bat for the team in many matches.

Sam Curran was easily the most valuable player of the tournament for the Chennai Super Kings with his all-round performances. Curran played a key role with the bat in many games including once against MI where he helped the team avoid bagging the lowest total of the league. Curran was crucial with the ball too by taking wickets regularly and finished as the team’s leading wicket-taker of the tournament. Deepak Chahar was at his best during the powerplay overs like every year.

Test out your luck