Sonali Patel can be a great differential pick for your 11Wickets fantasy side.

The upcoming match of South Group in Rachael Heyhoe-Flint Trophy 2020 to be played between Western Storm and Sunrisers at County Ground, Bristol, on Saturday.

The last South Group match of the ongoing edition of Rachel Heyhoe-Flint Trophy will see the second-placed Western Storm take on the bottom-dwellers Sunrisers. This has been a fairly decent tournament for Western Storm, who have won 3 of their 5 games.

Unfortunately for them, they are in the same group as Southern Vipers, who are arguably the best side of the competition. Sunrisers, on the contrary, have lost all of their 5 games. This match will provide them with an opportunity to net finish the season with zero in terms of points.

The sky is expected to be clear in Bristol. The temperature will be around 15 °C. The chances of precipitation are negligible.

The pitch is fairly balanced, providing support to both batsmen and bowlers. However, it will be wise to bat first as batting in the second innings will be much harder.

Average first innings score:  236 (On the basis of two matches in the tournament at this venue)

Record of chasing teams:  W – 1, L –1 (On the basis two matches in the tournament at this venue)

Sophie Luff has scored 336 runs from 5 games, which includes a stunning knock of unbeaten 104. She has an exceptional average of 84. She is a must-have for your 11Wickets fantasy side.

Fi Morris has picked up 10 wickets in 5 games so far. She has maintained a praiseworthy economy rate of just over 4 runs per over, alongside an average of less than 20.

Joe Gardner has scored 161 runs for Sunrisers, at a commendable average of over 30 and a decent strike rate of over 70. She also has 6 wickets to her name.

Georgia Hennessy has impressed with both the bat and the ball. She has picked up 9 wickets with an economy rate of less than 5 runs per over and has also scored 104 runs at an average of over 20. 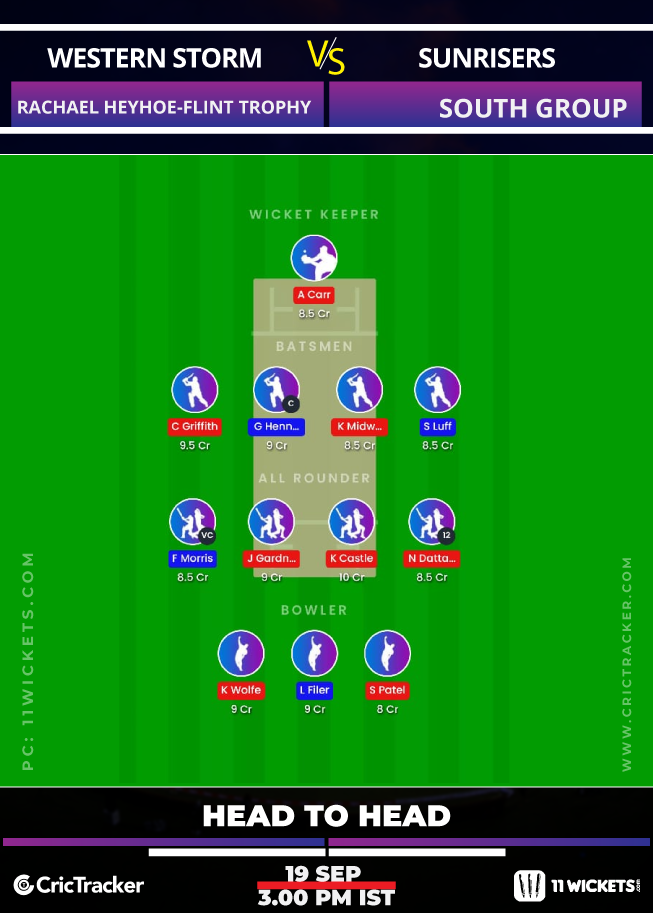 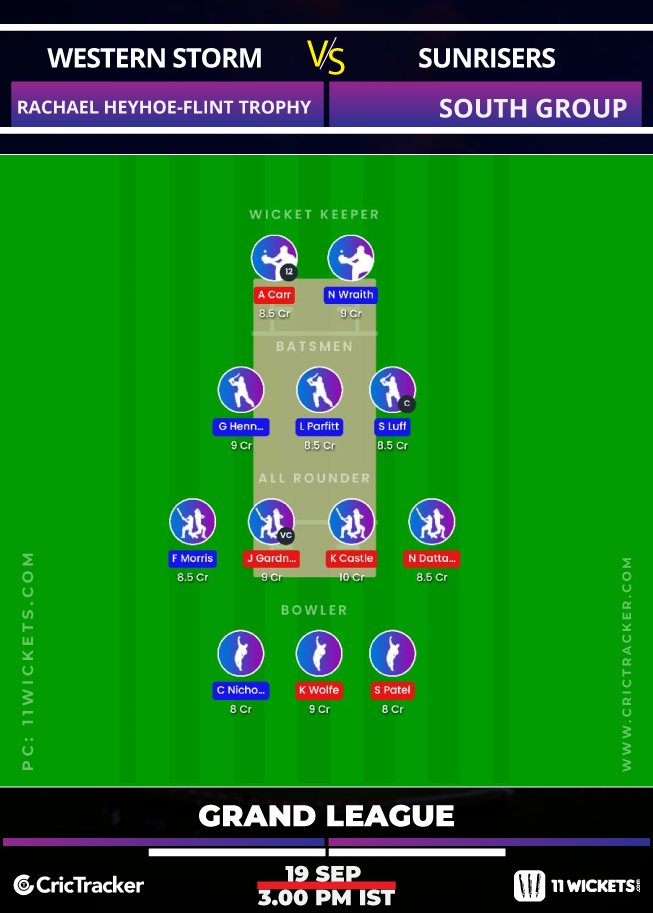 Sonali Patel has picked up 6 wickets in 5 games. She has also maintained an impressive average of just over 25 and an economy rate of 5 runs per over. She can be a great differential pick for your 11Wickets fantasy side.

Western Storm is expected to win this match.