Rajasthan Come out victorious in the last over

Rajasthan Come out victorious in the last over

The Report by Sajan Gupta

Nobody would have guessed before the Sunrisers Hyderabad batting that the Abu Dhabi pitch would all of a sudden get so difficult to bat on after what happened in the afternoon match, where over 400 runs were scored on the same pitch. Even Rajasthan Captain Shane Watson said at the toss time that he would be happy to chase anything below 200.

Even Hyderabad’s top three reading Aaron Finch, Shikhar Dhawan and David warner found it very difficult to get going on such seaming pitch. After the loss of Finch in the first over, Dhawan and Warner steadied the ship with a 75 runs partnership off 64 deliveries but both the aggressive batsman didn’t get any momentum in their innings and they both fell scoring run-a-ball 30’s. 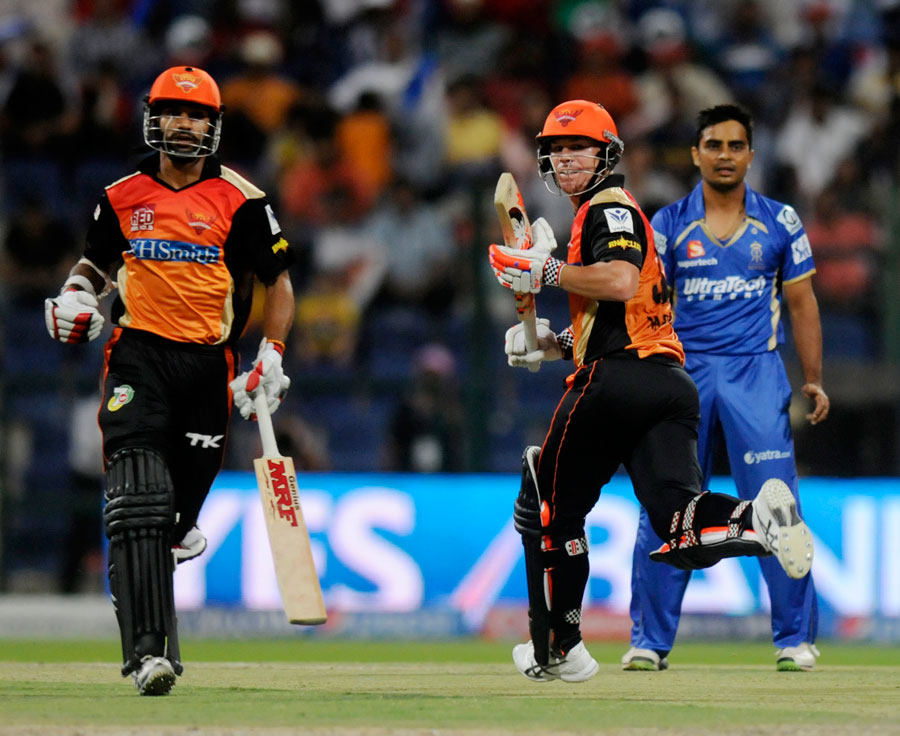 With a batting line-up filled with big-hitters managed only two sixes in their innings and ended up getting below-par 133 runs on their scoreboard thanks to some late cameos from KL Rahul and Venugopal Rao but Hyderabad have always been the tenacious defenders and with Steyn, Bhuvneshwar, Ishant and Mishra in their bowling line-up it was never going to be easy for Rajasthan to chase down even a low score of 134.

Rajasthan started their innings with a surprise by sending Abhishek Nayar opening, though he started with a controlled drive to the cover fence but he didn’t last much longer as he was dismissed third ball plumb right in front of wicket. Soon after Steyn, Bhuvneshwar and Ishant had the ball swerving around under lights and that proved too much for young Sanju Samson as he barley middled a ball in his short troubled stay before chipping a catch to mid-off in the fourth over.

That brought the Rajasthan Skipper Shane Watson on the crease but he also dint have any answers to some quality swing and seam bowling and soon fell for three runs and with 31 for 3 Stuart Binny joined Rahane in the middle, who played and missed, had plenty of inside edges and outside edges, was dropped early at first slip, was struck on the helmet by Ishant, but he didn’t throw his wicket away and see off the difficult phase and kept Rajasthan in the game with a half-century.

Binny on the other end was playing superbly and took some calculated risk as asking-rate was never too high and stuck out 77 run partnership with Rahane, which kept them in the game for the long period of time but Rahane finally fell in the 16th over and their finisher Brad Hodge failed to rotate the strike and his misery against the spin bowlers finally ended as he perished for an eight-ball 1. Mishra got those big scalps and put Hyderabad back on track.

With 17 required of 2 overs Steyn bowled the penultimate over and gave away nine runs but got the important scalp in Rajat Bhatia but with James Faulkner coming in at 8 and only 8 needed off final over it was like walk in the park for Faulkner as he smashed 2 consecutive boundaries to seal the match for Rajasthan with three deliveries to spare.