KL Rahul had a great stint in  New Zealand. He is in red-hot form with the bat, who will be an obvious pick for any fantasy team.

The 2nd Semi-Final of the Ranji Trophy 2019-20 will be played between Karnataka and Bengal at the Eden Gardens in Kolkata.

Karnataka will come face to face against Bengal in the 2nd semi-final of Ranji Trophy 2019-20 on Saturday. In the high voltage game, Karnataka have received a massive boost as KL Rahul has been included in the squad for the crucial game. He is coming with great momentum due to his brilliant performances in New Zealand.

Meanwhile, the presence of Manish Pandey and Karun Nair in the middle order will look to score some good knocks with the bat. Their bowling unit also looks in good touch with Prasidh Krishna, Krishnappa Gowtham taking wickets in bundles for their team. The same performances will be expected from these players in the semi-final.

Bengal has performed significantly well in this season of Ranji Trophy. And, they will have an added advantage of home ground in the semi-final. In batting, they have Manoj Tiwary, who is in red-hot form with the bat. He will look to continue with the same in the high voltage game. Abhimanyu Easwaran and Anustup Majumdar will also play an important role in Bengal’s performance in the upcoming clash.

The weather in Kolkata is expected to be on a hotter side with no chances of rain on all the four days of the game. The wind will be blowing at a rate of 7 to 11 km/hr whereas the temperature will deviate between 18 and 30 Degree Celsius throughout the day according to Accuweather.

The pitch at Eden Gardens will offer a tough battle between bat and ball in the semi0-finals. This ground has hosted five games in which four games ended on a draw. The only game here is won by Goa by an innings and 211 runs. The track will back batsmen to play their strokes on the first couple of days with spinners coming into the picture on the last couple of days. Spinners will start getting get some turn from the wicket. So, the side winning the toss will most probably look to bat first to take advantage of the batting-friendly wicket on Day-1.

KL Rahul has been included in the squad of Karnataka for the semi-final game.

KL Rahul had a great stint in  New Zealand. He is in red hot form with the bat, who will be an obvious pick for any fantasy team. Manish Pandey and Manoj Tiwary will be other batsmen to play a vital role in any fantasy team. Krishnappa Gowtham has done an impressive job with the ball as he has grabbed 29 wickets in his five games. He will be an important player in the upcoming match. 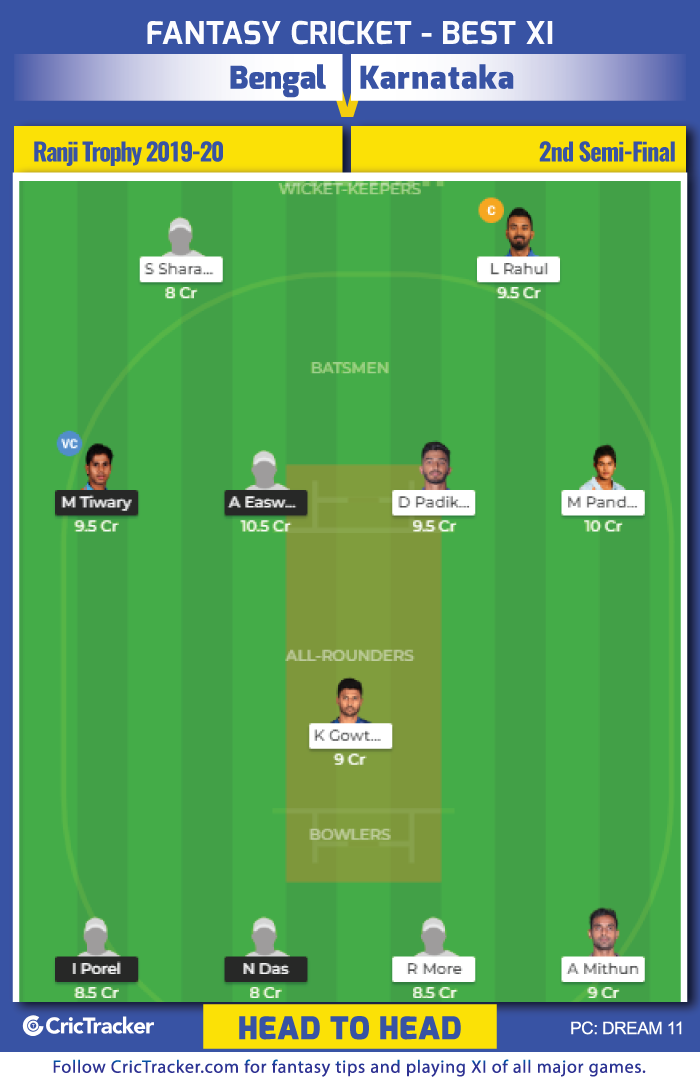 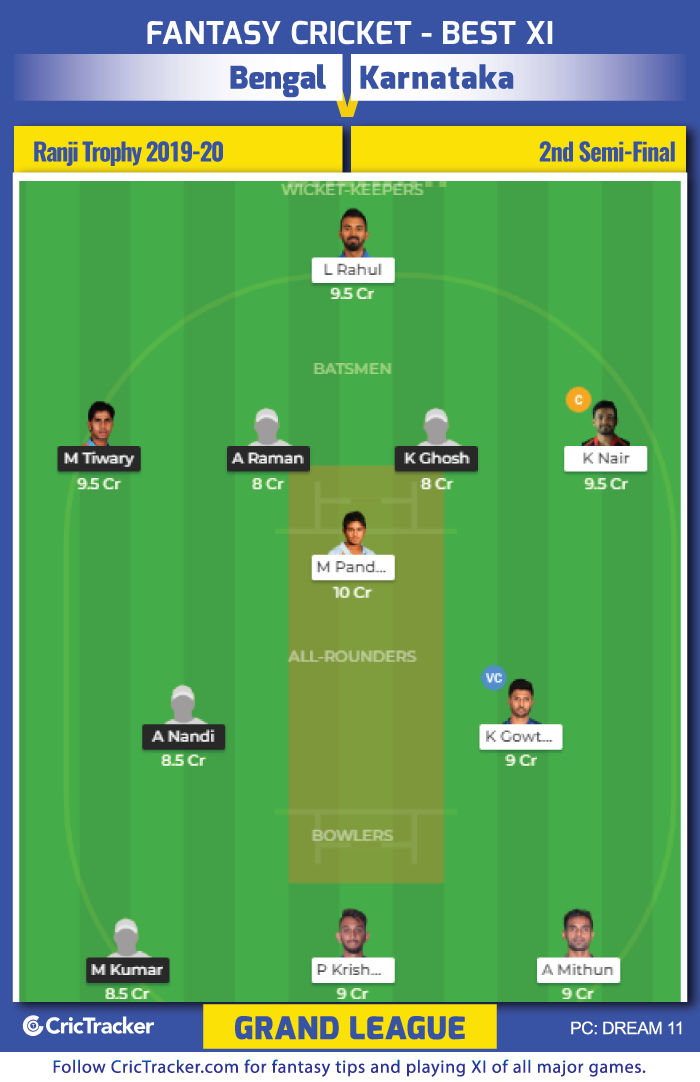 Bengal is yet to announce their squad for the final league game against Karnataka. And, they can opt for some surprising changes in their side. So, it will be wise to wait for the confirmed XI.

User Tips: The users should go with the team combination of one wicketkeeper, four batsmen, one all-rounder and four bowlers.

Karnataka are the favourites to win this game. But if the pitch stays true to its nature, a draw is on the cards.