New ball bowlers should be able to trouble the batsmen early on with the overcast conditions playing into their hands.

The Round 1 clash in Elite Group A and B of the Ranji Trophy 2019-19 will be played between Tamil Nadu and Karnataka at the NPR College Ground in Dindigul.

Ranji Trophy 2019-20 gets underway with a blockbuster encounter on the cards between Tamil Nadu and Karnataka. Both the teams might be tired of seeing each other with Tamil Nadu and Karnataka featuring in the finals of both Vijay Hazare Trophy and Syed Mushtaq Ali Trophy. Karnataka came up trumps on each occasion but four-day game is a different ball game altogether. Although Karnataka doesn’t avail the services of KL Rahul and Manish Pandey for this game, they have a solid unit led by Karun Nair.

On the other hand, Tamil Nadu might count themselves as favourites for this game as their side boasts of Ravichandran Ashwin and newly appointed captain, Vijay Shankar. With home conditions also bound to come in handy, Tamil Nadu will look to avenge their shorter format defeats against a well-balanced Karnataka side in this Round 1 fixture.

The weather is clear for the entire duration of the Test with overcast conditions on offer. The temperature is expected to hover around 28 degrees Celsius with a cloud cover of 70% expected at the start of the game on Monday.

A decent batting track awaits the two sides with the bowlers also expected to play a major role. Overcast conditions provide extra help with a lot of turn on offer from Day 3 onwards. Both teams would look to bat first and put up a big score upfront.

Mayank Agarwal is in fine form in the Test format this year for India. With 754 runs in just eight matches, Agarwal has had a breakthrough year with the Karnataka opener translating the same form in the domestic competitions as well. His international teammate, Ravichandran Ashwin is perhaps the best spinner in the country. Having played 70 Tests for India, his average of 25.37 is commendable. In addition to his international exploits, he had an unforgettable stint with Nottinghamshire as well, where he picked 34 wickets in just four games.

Devdutt Padikkal is the most talked about youngster in the world cricket right now. Although his first-class stats aren’t eye-catching, Padikkal has established himself in the domestic circuit with stunning performances. He topped the run-scoring charts of both domestic white-ball tournaments this year and is expected to translate the same form into the longer format as well. 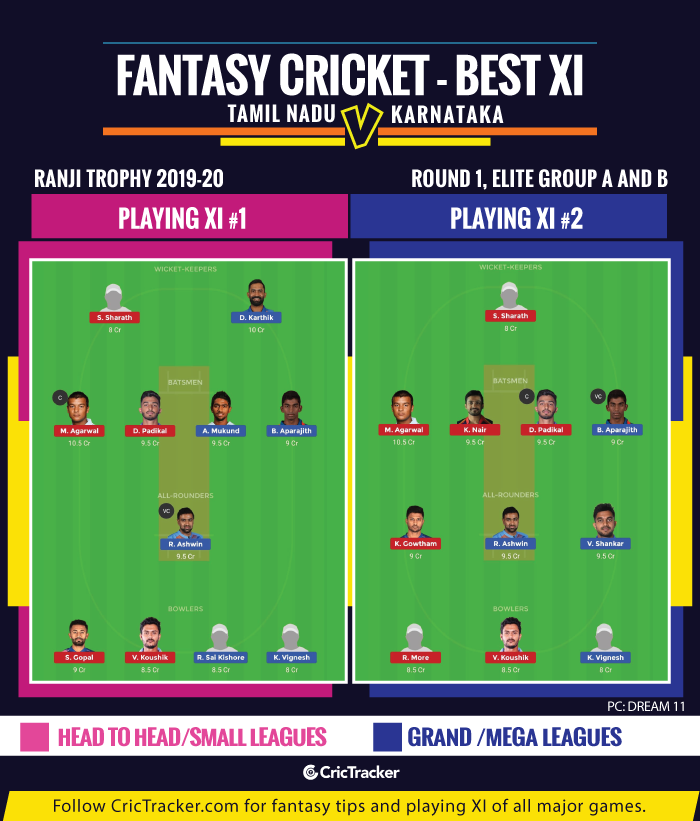 New ball bowlers should be able to trouble the batsmen early on with the overcast conditions playing into their hands. V Koushik and K Vignesh are dependable options and would help in accommodating other players as well who are rated at higher values.

Tamil Nadu is the favourites to win this encounter.