Bhargav Merai is in red hot form with the bat in this season of Ranji Trophy 2019-20. He has mustered 467 runs in six games for his team.

The Round 8, Elite Group A and B fixture of the Ranji Trophy 2019-20 will be played between Delhi and Gujarat at the Arun Jaitley Stadium in Delhi.

Gujarat have won back to back two games in Ranji Trophy 2019-20 and they are on the second position in their group with 26 points. They hold a big opportunity to grab the top spot by winning the upcoming clash against Delhi. Bhargav Merai is the leading run-scorer for his side with 399 runs in six games. In the previous game, Parthiv Patel also muscled a brilliant fifty in the first innings. He will certainly look to click a breakthrough knock with his bat. Roosh Kalaria has done extremely in the bowling department as he has grabbed 24 wickets in his five games with one five-wicket haul.

Delhi looks quite inconsistent as their players have failed to perform well in the domestic tournament in this season. Only Nitish Rana has smacked 467 runs in six games with two centuries and as many fifties. The other players in the team should come up with improved performance against in-form Gujarat. Otherwise, they might have to suffer their second defeat in the ongoing tournament.

There are no chances of rain on Day 1 of the matchday between Delhi and Gujarat. The weather will be clear on Day 1 but it will be cloudy on Day 2 and Day 3. The wind is expected to blow at a rate of 11 to 13 km/hr whereas the temperature is expected to hover between 7 and 19 Degree Celsius throughout Day 1 according to Accuweather. The players can expect a chilling atmosphere during match time.

The bowlers will get a lot of help from the wicket at Arun Jaitley Stadium. The batsmen might have to struggle to score runs in the match. In the four day game, the batsmen will have to wait for the opportunity to score runs. In the past three games, the side fielding on Day 1 has won all the matches. So, probably the side winning the toss will opt to field at this venue as far as the trends of the tournament are concerned.

There is no news about the change in the squad for both the teams. We are assuming that they are going unchanged for this match.

Bhargav Merai is in red hot form with the bat in this season of Ranji Trophy 2019-20. He has mustered 399 runs in six games for his team. So, he will be an obvious pick for any Dream11 Fantasy side. Nitish Rana will be another hot favourite pick for any fantasy side due to his all-round performance in the ongoing tournament. Rush Kalaria will be a vital player in the bowlers’ category in the fantasy team. He has scalped 4 wickets in his five games with one five-wicket haul for his team. 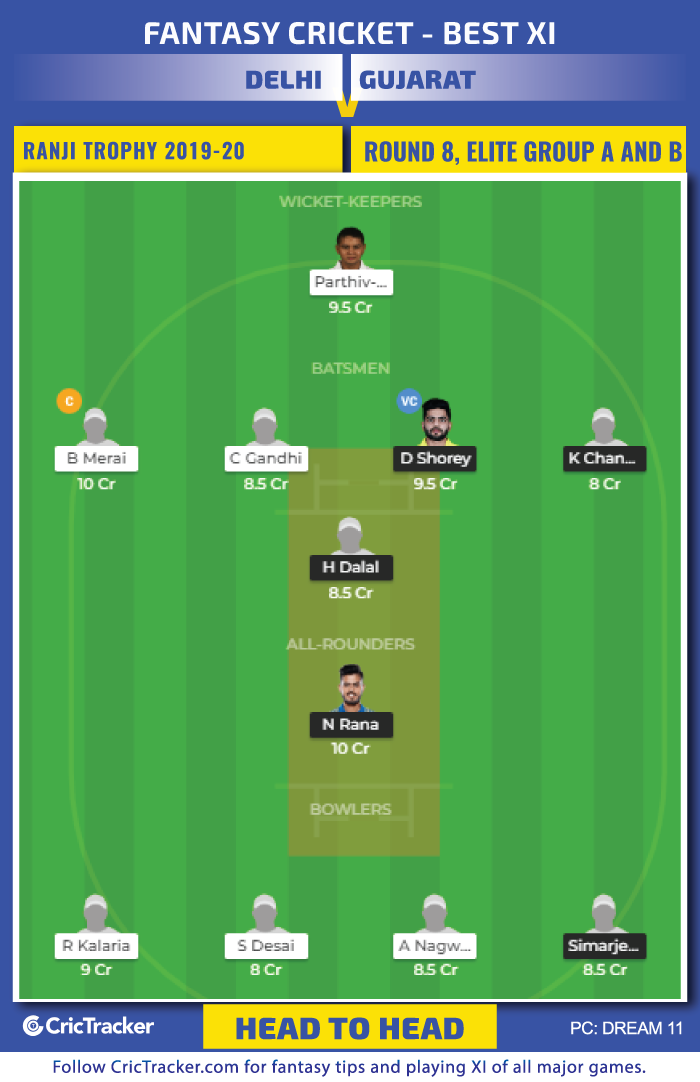 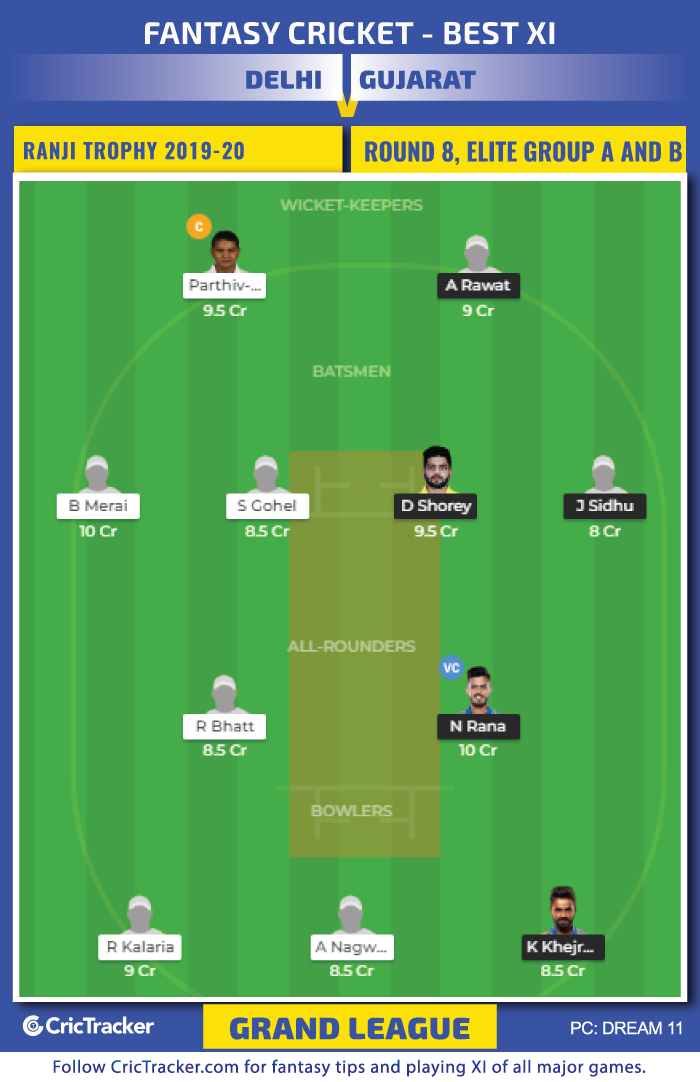 Try to pick more bowlers in the dream11 fantasy team due to the bowling friendly conditions. The users can go with a combination of one wicket-keeper, four batsmen, two all-rounders and four bowlers.

Gujarat is expected to win this match.