It is advisable to include more batters in your fantasy teams.

Uttar Pradesh will take on Maharashtra in the Elite Group G match of the Ranji Trophy 2021/22 which is starting from Thursday. It’s a crucial game as both sides eye to finish at the top of the Elite Group G standings. After conceding 1st innings lead to Vidarbha in their opening game, Uttar Pradesh thereafter sealed an easy win over Assam within 3 days. They showed a lot of character in all the departments which in the end won the game for them.

Maharashtra on the other hand, started this tournament with a bang as they wrapped up a convincing over Assam by an innings and 7 runs, whereas there was a slight dip in the performances in their following game and they conceded 1st innings lead to Vidarbha. It’s an important game from the context of the tournament and it will be interesting who will come out on top.

It’s a completely flat batting surface that assists the batters on all 4 days of the match. The bowlers had to toil hard extremely hard to pick wickets here. Whoever wins the toss without any hesitation must bat first.

Top Picks for UP vs MAH Dream11 Match:

Rinku Singh is in a good run of form in this tournament, in 2 matches he has scored 155 runs at an average of 77.5 which includes 2 half-centuries.

Opener Samarth Singh hit twin half-centuries in the last match against Assam. Overall, in 2 matches in this competition, he has scored 153 runs at an average of 51.

22-year-old, Pavan Shah made an excellent start to his FC career. In 2 matches in this tournament, he has struck 278 runs at an average of 92.66 with the highest score of 219.

Ankit Bawne is an experienced cricketer who has played more than 100 FC matches. In 2 matches in this tournament, he has scored 124 runs at an average of 62.

UP vs MAH Must Picks for Dream11 Fantasy Cricket:

Suggested Playing XI No.1 for UP vs MAH Dream11 Fantasy Cricket: Suggested Playing XI No.2 for UP vs MAH Dream11 Fantasy Cricket: 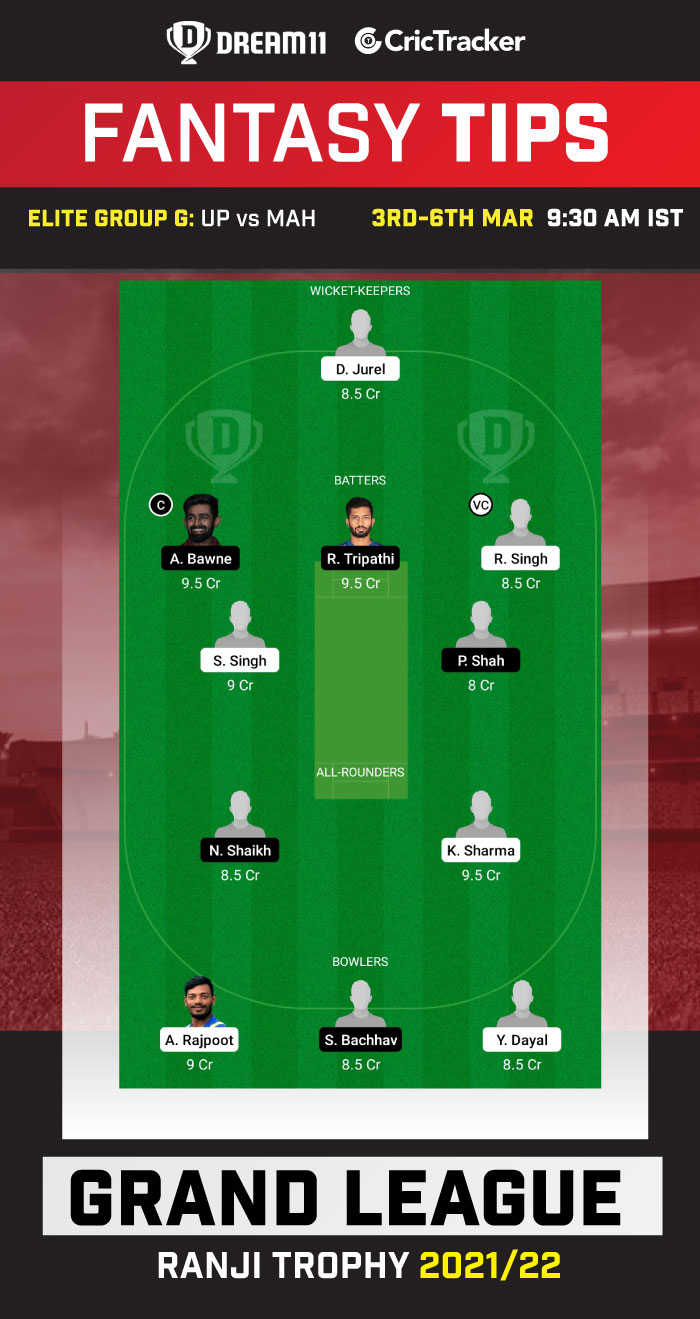 UP vs MAH Risky Captaincy Choices:

Former India U19 skipper, Priyam Garg has scored 127 runs in 2 matches in this tournament at an average of 31.75. He is a risky captaincy pick for your fantasy teams.

Rahul Tripathi hasn’t made big scores in this tournament, considering his current form it’s a risky call to pick him as your fantasy team skipper.

Vicky Ostwal is inexperienced at this level and hence it’s better to avoid him while making your fantasy teams.