Royal Challengers Bangalore (RCB) have been on a role in the 2020 Indian Premier League (IPL) Having won three of their four matches, they even found themselves at the top of the points table before being replaced by Delhi Capitals (DC) later on Saturday.

In their last match, Virat Kohli and Co defeated the Rajasthan Royals (RR) by eight wickets at the Sheikh Zayed Stadium in Abu Dhabi. Their next match is against the Capitals on Monday, October 5 at the Dubai International Cricket Stadium.

RCB, in the history of the IPL, have dominated the Delhi franchise, winning a chunk of matches. However, this time around the task may not be easy as DC have also won three games out of four. Moreover, Shreyas Iyer’s men also beat the Kolkata Knight Riders (RR) by 18 runs in their last game.

The pitch in Dubai has been good for batting, but it has also favoured the team, batting first. Chasing has been tough on the strip. The spinners have been effective and pacers can also extract a lot if they are ready to bend their back.

The conditions will be hot with the temperature around 34 degrees Celsius. Therefore, it’s paramount for the players to stay hydrated and stay fit enough.

Playing Combinations for RCB vs DC

Virat Kohli got back to form with an unbeaten half-century against the Royals taking his team to victory. Against Delhi, Kohli’s numbers are gigantic, to say the least. In 21 matches, Virat has 825 runs at an average and strike-rate of 63.46 and 139.89 respectively.

He also has eight fifties with a top score of 99. It goes without saying that if Kohli gets his eye in, the Capitals could be in trouble.

Rishabh Pant has taken a liking to the RCB bowling attack in the last few years. In seven matches, the left-hander has 274 runs at an average and strike-rate of 39.14 and 156.57 respectively.

He has gotten runs in the ongoing IPL, batting in the middle-order, but the best of Pant is yet to come. If he gets a fair bit of time to bat, Rishabh can wreak havoc and unfold mayhem in the opposition camp.

RCB vs DC Head to Head 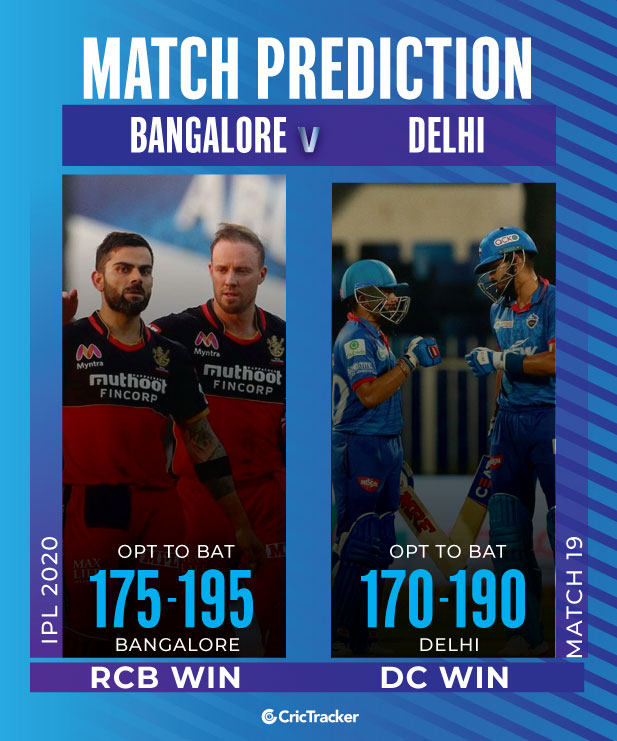