Glenn Maxwell has scored 6 half-centuries in this edition of the IPL. Royal Challengers Bangalore will go head-to-head against Kolkata Knight Riders in the Eliminator of the IPL 2021. Royal Challengers are still looking for their maiden IPL title and it’s a perfect opportunity for them this year, as they have got the perfect mix of experienced and talented youngsters. They missed out on the opportunity to finish in the top two spots on the basis of net run rate, as Virat Kohli’s men finished third in the standings with 18 points. However, they have still played an excellent brand of cricket all throughout this IPL and will be looking forward to giving their best in the playoffs.

Kolkata Knight Riders, on the other hand, had an exceptional second leg of the IPL, where they bounced back from the bottom half of the table and finished fourth in the standings. They relied mainly on youngsters, who didn’t disappoint them. They had won their last 2 matches and look to extend their winning run. Whoever wins this match will go through to Qualifier 2, whereas the loser will be knocked out of the tournament.

The surface here at Sharjah has become a bowling-friendly one and the batters have struggled to score runs. The highest score registered so far here in the 2nd leg is 171. The surface might get slow down as the game progresses and hence batting first is an excellent option.

RCB skipper Virat Kohli hasn’t fired in the last couple of matches. However, he is a big match player and can deliver in this crucial game. In 14 matches in this edition, he has mustered 366 runs at an average of 28.15.

Shubman Gill has scored 2 half-centuries in the last 2 matches, which is a positive sign for the Knight Riders ahead of playoffs. Overall in this tournament, he has scored 352 runs in 14 matches at an average of 25.14.

Glenn Maxwell has made a massive impact with the bat for RCB, as he played a vital role in taking them till the playoffs. The Aussie has scored 498 runs in 13 innings at an average of 45.27, with the highest score of 78. Maxwell has chipped in with 3 wickets as well.

Venkatesh Iyer is the new sensation of the second leg of the IPL. He has got good reach and can play the shots freely, which is giving him positive results. In 7 matches so far, he has scored 239 runs at an average of 39.83 and picked up 3 wickets as well.

Harshal Patel has been consistently picking wickets for RCB this year. He is the current Purple Cap holder with 30 wickets in 14 matches, with the best figures of 5/27.

Varun Chakravarthy has been the pick of the bowlers from Knight Riders in this edition. Tamil Nadu’s deceptive spinner has picked up 16 wickets in 14 matches at an economy of 6.5, with the best figures of 3 for 13.

Kona Srikar Bharat became a hero by hitting a last-ball six to win a match for RCB against Delhi Capitals. He was the player of the match for his match-winning knock of 78* runs from 52 deliveries.

RCB vs KKR Must Picks for Dream11 Fantasy Cricket: 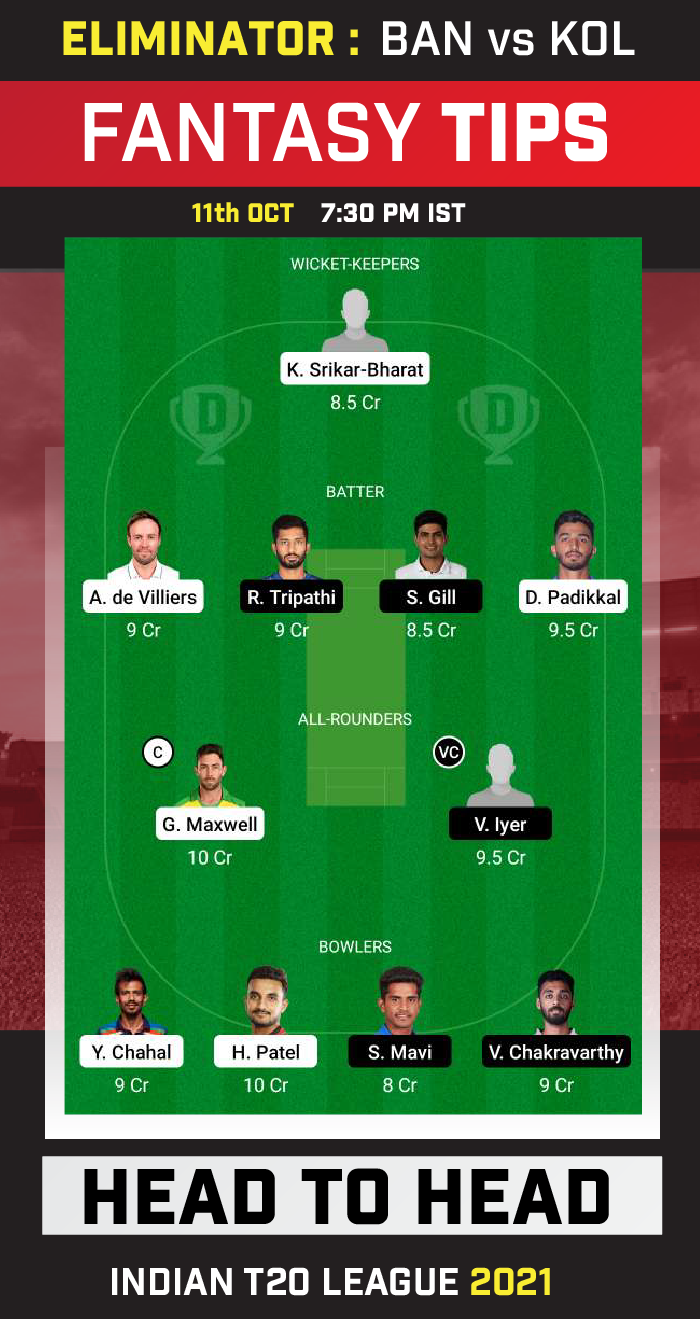 AB de Villiers is a finisher for RCB. He has not got adequate chances in this leg, but the South African can be backed to deliver whenever needed. It’s worth a risk to pick him as your fantasy team skipper in the big match.

Sunil Narine has picked up 10 wickets in 11 matches in this IPL at an economy of 6.52. You can take a risk and pick him as your fantasy team skipper.

George Garton has picked up 3 wickets in 4 matches so far in this IPL. Considering his average performances, it’s better to avoid him while making your fantasy teams.