Yuzvendra Chahal ripped the heart out of SRH's batting lineup the last time RCB played against them.

Royal Challengers Bangalore (RCB) have done an excellent job thus far in the 2020 edition of the Indian Premier League (IPL). However, in order to qualify for the playoffs, Virat Kohli and Co need a victory or two in the next two games.

In their last game, Mumbai Indians (MI) beat them at the Sheikh Zayed Stadium in Abu Dhabi. But despite the loss, they are placed handsomely in the table with 14 points. The Challengers are next scheduled to lock horns with the Sunrisers Hyderabad (SRH) on Saturday, October 31 at the Sharjah Cricket Stadium.

In their previous meeting, it was RCB, who came out trumps by 10 runs. The Sunrisers must be high on confidence after beating Delhi Capitals (DC) by 88 runs in the previous game. But they need to win their next game to keep their hopes of qualifying for the playoffs alive.

The pitch in Sharjah has been an excellent one for batting. It’s a venue where hitting sixes has been bread and butter for the teams. But in the last few matches, the scores have tended to come down a wee bit.

The spinners have gotten a significant amount of assistance from the surface. The conditions will be warm with the temperature around 28 degrees Celsius. The humidity will mostly be in the low-50s.

Playing Combinations for RCB vs SRH

AB de Villiers can be extremely destructive on his day. In the ongoing edition of the T20 league, the right-hander has 339 runs from 12 matches at an average and strike-rate of 48.42 and 171.21 respectively.

David Warner is the all-time leading run-scorer for SRH and he hasn’t flattered to deceive even this time around. The Sunrisers’ captain has 436 runs at an average and strike-rate of 39.63 and 134.56 respectively.

Though he has mostly been cautious, in the match against the Capitals, he threw the kitchen sink at everything. He will be looking for another’s captain’s knock next time.

RCB vs SRH Head to Head

The prediction is for Royal Challengers Bangalore to win the match. 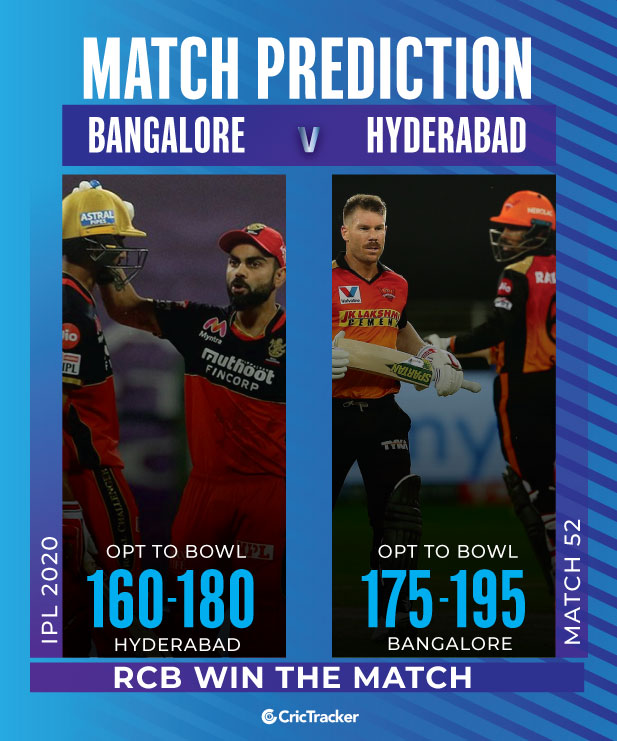