Dwayne Smith is going to be an X-factor for West Indies Legends.

The 12th match of the Road Safety World Series 2020-21 will be played between Bangladesh Legends and West Indies Legends on 12th March at Shaheed Veer Narayan Singh International Stadium in Raipur.

Bangladesh Legends will up against the West Indies Legends in the 12th match of the Road Safety World Series 2020-21 on Friday. Bangladesh Legends’ campaign in this tournament has been nothing short of a miserable journey, as they lost 3 consecutive matches on the trot. They have look fragile on the field and will need to complete makeover to come back strongly in this competition. Mohammad Nazimuddin looks like the only batsman they can rely on at the top-order.

Meanwhile, West Indies Legends’ story isn’t any different. They too have lost all of their 3 matches in this competition. Two of those defeats were prior to the COVID-19 pandemic last year and they haven’t able to get back to the winning ways this year as well. Skipper Brian Lara and Dwayne Smith have performed well for them, but they will need to perform better as a collective unit.

As usual, the weather forecast section will remain the same. The days are hotter whereas the evenings will be much cooler, with the temperature ranging between 27-29 degrees Celsius and the humidity will be 58 per cent. There is no chance of precipitation for this match.

Out of 7 matches played on this venue, the team batting first has won only twice. Chasing above 160 is always a difficult task on this surface unless the teams have depth in their batting. The surface initially will assist the quick bowlers and spinners can expect a turn in the middle overs.

Mohammad Nazimuddin played a good knock in the losing cause against Sri Lanka Legends in the previous match, scoring 54 runs from 41 balls.He is the leading run-scorer for Bangladesh Legends with 115 runs in 3 matches at an average of 38.33.

Wicketkeeper Khaled Mashud is contributing in the middle-order for Bangladesh Legends and he is yet to be dismissed. In 3 matches, he has scored 65 runs at a strike rate of 98.48, with the highest score of 31*.

Mehrab Hossain played some delightful shots against Sri Lanka Legends in the previous game. He scored 27 runs at a strike rate of 103.85.

West Indies Legends’ skipper Brian Lara is showing why he is regarded as one of the classiest batsmen of his generation. Against Sri Lanka, he scored 53 runs from 49 balls. In the 3 matches he has played in this tournament, Lara has scored 82 runs at an average of 41.

Dwayne Smith played an aggressive knock against Sri Lanka Legends. Coming at number 4, he smashed the bowlers left, right and centre and scored a 27-ball 47. 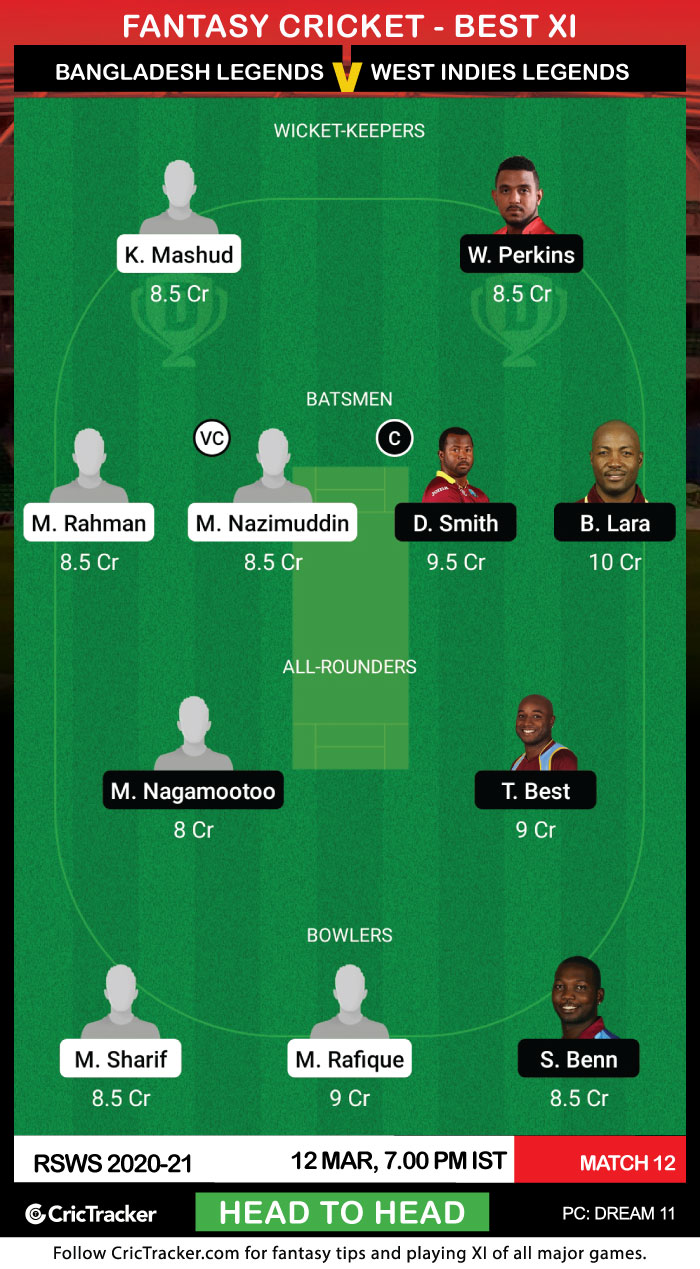 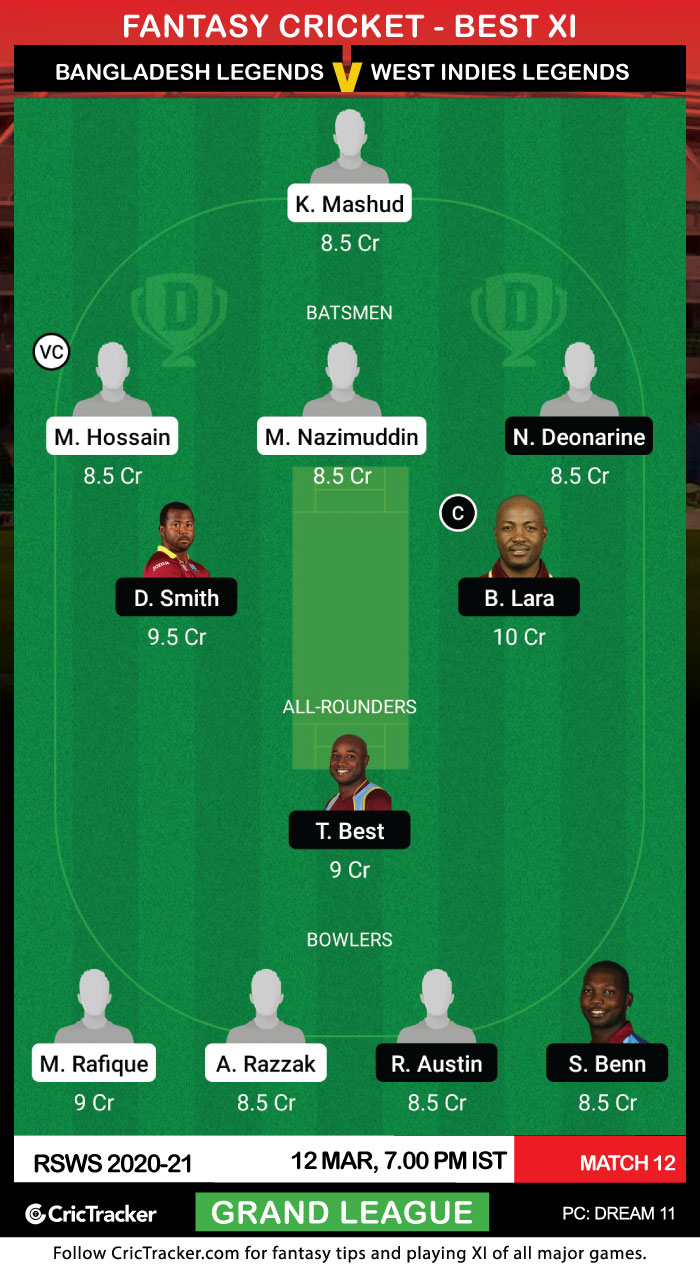 Dwayne Smith is going to be an X-factor for West Indies Legends. He has got huge experience of playing in sub-continent conditions during IPL. He can lead one of your Dream11 fantasy teams.

West Indies Legends are expected to win this match.