Both the sides' skippers Jonty Rhodes and Tillakaratne Dilshan had an excellent last match for their respective sides. They both can be good picks for captaincy.

The 8th match of the Road Safety World Series 2020-21 will be played between South Africa Legends and Sri Lanka Legends on 8th March at Shaheed Veer Narayan Singh International Stadium in Raipur.

South Africa Legends will take on Sri Lanka Legends in the 8th match of the Road Safety World Series 2020-21 on Monday. South Africa Legends have already played a match in this tournament last year and won the game by 6 wickets. This time, however, there have been a lot of changes to their side. Loots Bosman, Andrew Puttick, and Justin Kemp are the key players who are participating this time for South Africa Legends.

On the other hand, having lost their first match against India Legends last year, Sri Lanka Legends made a fresh start to this year with an impressive win over West Indies Legends by 5 wickets with 6 balls to spare. Brilliant batting shows from skipper Tillakaratne Dilshan and Upul Tharanga gave their side a first taste of victory in this tournament. With this win, they moved to the 2nd spot in the standings with 8 points in their bag. They will aim to repeat the same performance against South Africa Legends also.

It’s going to be a pleasant evening in Raipur after what will be a pretty hot afternoon. The temperature will be ranging between 26-32 degrees Celsius and the humidity will be 23 per cent. There is no chance of precipitation for this match.

Witnessing the last two matches played on this venue, the surface has been conducive to the batsmen. Having said that, there is some pace in the wicket as well. Chasing will be much easier in the second half of the match.

South Africa Legends’ skipper Jonty Rhodes hasn’t played many T20 matches in his career, but he played a good knock in the run-chase against West Indies Legends in this tournament last year, scoring 53* runs from 40 balls.

Justin Kemp is a big hitter of the ball and a useful medium-pacer. In his T20I career, he has played 8 matches for South Africa and has scored 203 runs at an average of 50.75 with the highest score of 89*.

Loots Bosman has opened for South Africa during his international stint. He has played 14 T20Is and scored 323 runs at a strike rate of 147.48, with the highest score of 94.

Tillakaratne Dilshan played a captain’s knock with the bat in the run-chase against West Indies Legends, scoring 47 runs from 37 balls. He also bowled a good spell with the ball, picking up a wicket at an economy of 7 runs per over.

Upul Tharanga remained unbeaten in the winning cause against the West Indies Legends, scoring 53* runs from 35 balls. He is in good touch with the bat and can be a good captaincy pick.

Chamara Silva was looking good in the previous match against the West Indies Legends. He scored 22 runs in that game. 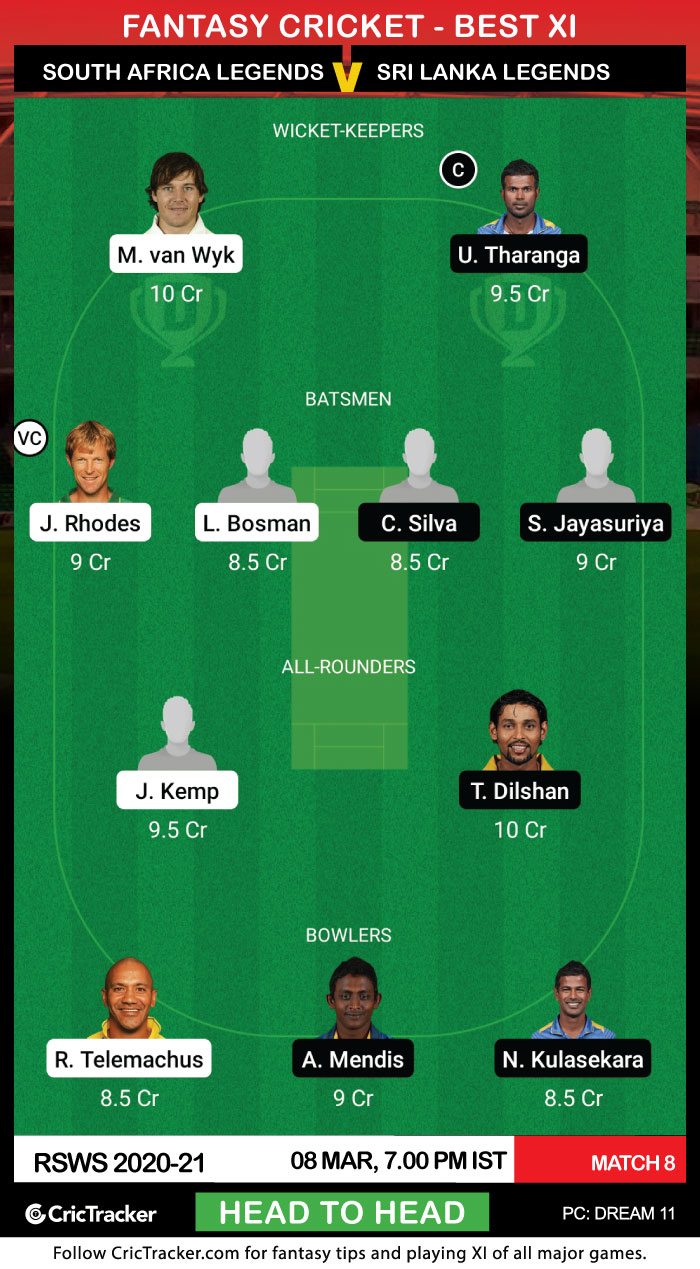 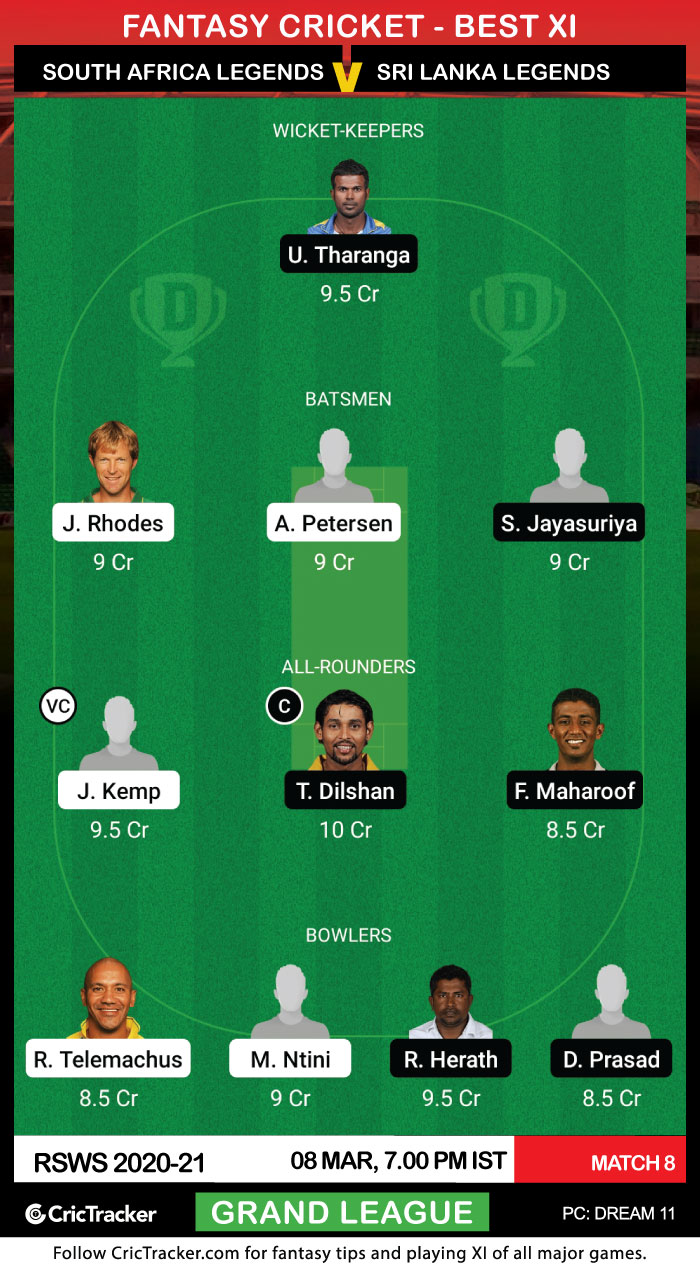 Both the sides’ skippers Jonty Rhodes and Tillakaratne Dilshan had an excellent last match for their respective sides. They both can be good picks for captaincy.

South Africa Legends are expected to win this match.