Rohit Sharma should admit before his fans soon that he made a terrible error in judging the situation and his fitness, worse than even a tail-ender leaving a straight ball heading into the timber. 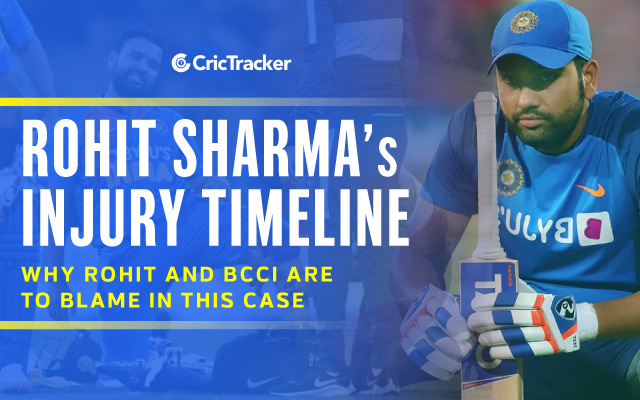 After a lot of drama following his injury in the recently concluded IPL in the UAE, Rohit Sharma eventually is set to miss the Test series Down Under. A sheer lack of professionalism saw a key player missing out. For Rohit Sharma, the world turned upside down in no time. For India’s cricketing authorities, it was an imperfect plot. For Indian cricket, the loss was massive.

The ace batsman, who had a great opportunity to show his lately-found mettle in Test cricket in the absence of regular captain Virat Kohli who will be back home to serve paternal duties after the opening Test match in Adelaide starting next month, has now been ruled out of the first two Tests and there is very less possibility that he will be seen donning the whites in the last two. There is another Sharma who is accompanying the premier batsman in this disappointing journey and it is Ishant, India’s most experienced fast bowler at the time.

The chronology lays bare the utter lack of clarity

It all started during the recently concluded Indian Premier League (IPL) played in the UAE. On October 18, the Mumbai Indians (MI) skipper injured himself during a game with Kings XI Punjab and five days later, MI said in a statement that Rohit’s injury was being monitored in consultation with the Indian cricket board — BCCI. Three days later, the squads for the tour of Australia were picked but Rohit didn’t feature in any of those.

However, hours after the squads were announced, MI came up with a video on Twitter showing Rohit practising in the nets. Team India coach Ravi Shastri and BCCI President Sourav Ganguly, who are otherwise not the best of friends, echoed each other within a span of two days saying the Mumbai batsman could aggravate his injury further if he went on playing.

Rohit did not stay indoors yet. On November 3, he was seen leading MI out in their last league match against Sunrisers Hyderabad. Six days later, he was added to the Test squad even though the air over his fitness was not cleared. But surprisingly, he flew back to India from the UAE while the rest of the squad headed Down Under. On November 13, Ganguly conceded that Rohit is only 70 percent fit and by then, the controversy already started heating up over the franchise-over-country debate.

How was Rohit playing in the IPL when he is still not fit to play for the country? — people kept asking. But no clear explanation was given on the state of affairs around Rohit. On November 19, Rohit arrived at the National Cricket Academy for rehabilitation and acknowledged two days later that the injury was far from over.

On Sunday, November 22, Shastri said it would be difficult for Rohit to play in the Test series if he doesn’t board the flight to Australia soon and two days later, it was more or less clear that India will take the field for the long format without him in their ranks. The quarantine rule in Australia means Rohit doesn’t have enough time now to get prepared for the entire Test series. The injury is another obstacle. 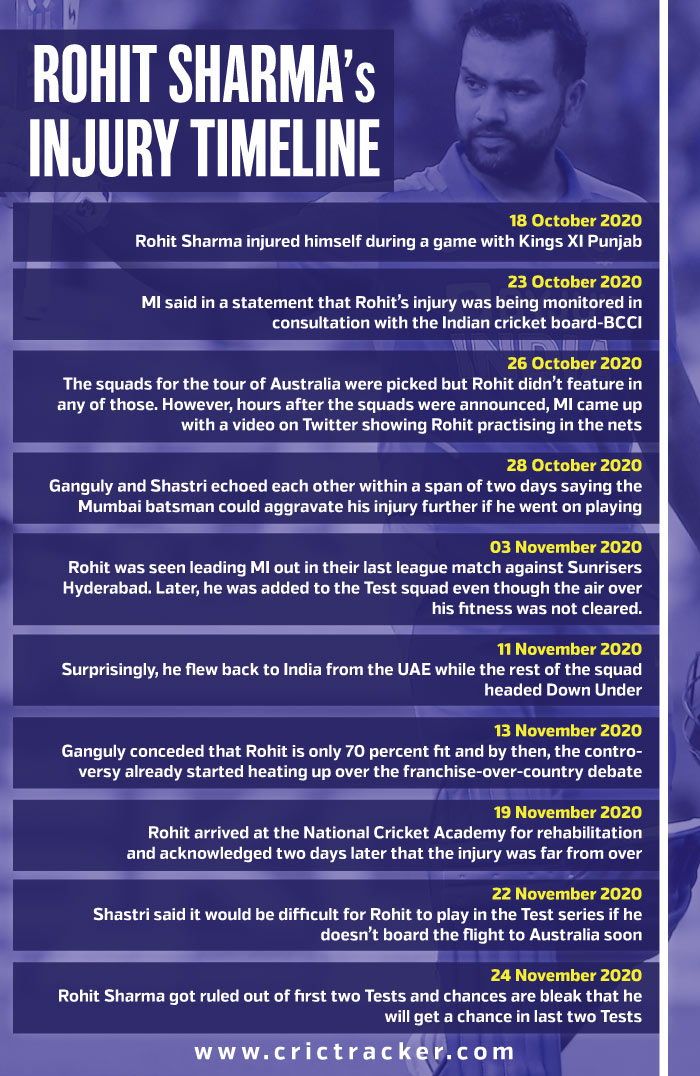 Ill-handling of players’ fitness is not new in Indian cricket. In the late 1990s, speedster Javagal Srinath was made to bowl so much that he had a serious injury that packed him off the field for days, leaving him in great mental pain. As a reason, it was said that India lacked quality third and fourth seamers to support Srinath and Venkatesh Prasad — the spearheads — but that is something not convincing.

Overdose of cricket was one reason why Srinath faced such a predicament. Similar things happened with the great Sachin Tendulkar, thanks to his tennis elbow. In India, one would feel that there are invisible pressures on players to keep on playing and performing and entertain their fans. But that is not something that science permits. The result? Breakdowns that could have been avoided with more sound handling.

In the case of Rohit, too, the unprofessionalism is to be blamed. Rohit had his injury in the IPL (he played only 12 games this season, the lowest ever in a season since making debut in the competition in 2008) but while he was not picked for the all-important Australia tour, he continued to play in the cash-rich T20 tournament. Since he was on a golden run as a captain and went on to lift his fifth trophy leading the MI, the reality took some time to settle in. And now, once the euphoria got over, Rohit is facing the same pointed question from the purists: Club over the country?

Rohit Sharma is injury-prone: He himself overlooked it?

Rohit Sharma, who sustained an injury during India’s tour of New Zealand earlier this year and missed the ODI and Test series, should have a realistic assessment of his injury-prone body. He did not even care to lend a serious ear to either Shastri or Ganguly who apprehended his injury conditions and advised against making a comeback to the IPL with his injury.

There were only suggestions and indications that Rohit risked his injury by dragging himself on the IPL but no party — either the player or his franchise or the board — came out with an emphatic communication about what the future plans. Had Rohit not played in the business end of the IPL and given the Australia tour a miss, one would have expected a less reaction. But since he played for the franchise and not for the country, the criticism is understandable. The franchise can still be spared because it cares little more than seeing the cricketing returns. But why didn’t the board act on time?

Was BCCI practising what it preached?

If Rohit clearly made a wrong judgment on his injury that has now seen him losing a good opportunity to do justice to his batting skills in Tests (he now averages 46 plus in the red-ball format with three hundreds in the last six innings) and improve the numbers in Australia (he averages only 31 in Tests Down Under with two fifties), the BCCI also is to blame for not taking a strong stand on the player to serve the national interest.

Rohit is no fringe player and since he is a BCCI employee, the board would have done a great service to him and the nation by asking him to stay out of the IPL after he injured himself. If Ganguly knew that Rohit was risking his fitness ahead of a crucial overseas tour, why didn’t he tell him straight to put the country above the franchise, especially when the safety rules in times of the pandemic are a top priority? Rohit needed enough rest but he, along with the cricketing heads, ignored the fact even while knowing the facts quite well. Ganguly said on the Rohit issue that “it’s the BCCI’s job to get their best players on the park”. Did the board practise what it preached?

How can an injured cricketer say he will manage shorter things?

That a scientific approach is still lacking in one of the planet’s cricketing powerhouses becomes clear when one sees how vaguely Rohit spoke about his injury on November 21. In an interview with PTI, the opening batsman said his injured hamstring was feeling “absolutely fine” and that he wanted to be “clear in his mind” that he remains fully fit for the Australia tour. He also said that he conveyed to the MI the message that he could manage the situation “quite nicely” since it was the shortest format. “Once I made my mind clear, it was all about focusing on what I needed to do,” the cricketer said.

Nothing perhaps could have been more vague than this. To say that T20 cricket is less demanding physically because it is shorter in tenure compared to the other two formats is completely misleading. By “managing” the situation in the IPL, Rohit was only serving the short-term interest for he should have known that hoping to play in a full-fledged tour of Australia with partial fitness is a no-brainer. He should admit before his fans soon that he made a terrible error in judging the situation and his fitness, worse than even a tail-ender leaving a straight ball heading into the timber.