Joshua Cobb scored an unbeaten 146 against Pakistanis in the warm-up game.

Yorkshire and Northamptonshire, the struggling teams of the North Group of the Royal London One-Day Cup, will face off on Wednesday. Both the teams have featured in five matches in this tournament winning only one of those. Yorkshire began with a huge 235-run win against the Leicestershire before being involved in two Tied matches. They also lost to Lancashire by only one run.

These close results meant Yorkshire lost as many as four points due to their inability in seizing the last moments. On the other hand, the batting of Northants played the main role in the team’s failures as they have lost as many as three matches while chasing. They are coming on the back of a big defeat against the Pakistanis in the warm-up fixture where Joshua Cobb smashed an unbeaten 146.

The 2019 Royal London One-Day Cup game between Northamptonshire CC and Yorkshire CC in the North Group will be played at the County Ground, Northampton.

The Northampton’s County Ground is usually a high-scoring one in the limited-overs cricket. The average score in the last five List A games here reads 280 as the team batting first posted 350+ on two instances. The game between the hosts and Pakistanis on Monday witnessed the visiting team chase down the target of 274 in only 41 overs.

Luke Procter has been consistent but missed out on making big points in this tournament. The Yorkshire keeper Jonathan Tattersall began the tournament with three 40+ point matches. The duo would be ideal for the multiplier roles. Joshua Cobb will be taking the field with the confidence of a big knock against Pakistan. 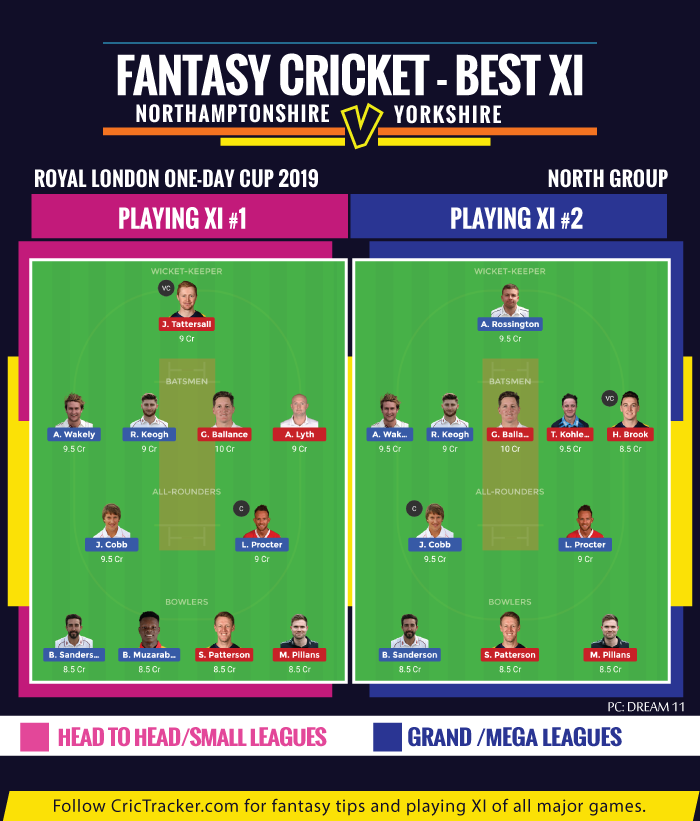 Northamptonshire has not announced their squad for the game against Yorkshire. The suggested line-ups include only the players who are ensured of being part of the playing XI. Picking team after the announcement of line-ups will be an ideal move.

Yorkshire is expected to defeat the hosts considering the form of both teams in this tournament.