Fidel Edwards added to the Hampshire squad in the place of Brad Wheal.

Hampshire became the first team to seal their playoff berth from the South Group winning six out of seven matches which could even help them to qualify for the semi-final directly. The International stars in the Hampshire line-up didn’t allow James Vince’s absence felt Aiden Markram’s blistering 87-ball 130 powered them to a huge total of 355/5 against Sussex. They clinched a 9-run victory surviving a sensational knock from David Wiese.

They will be now up against Somerset who won four out of the six matches. They are tied on eight points with two other teams but it is their NRR that is helping them to have an edge. Their NRR was even better before the last match against Middlesex which they lost by a 118-run margin. Somerset needs to win at least one game from here on to finish in top three. They need not rely on the results of the remaining matches if they win both their games.

The 2019 Royal London One-Day Cup game between Somerset County Cricket and Hampshire County Cricket in the South Group will be played at the Cooper Associates County Ground in Taunton.

This match can be streamed live on Somerset County Cricket’s YouTube Channel.

The County Ground in Taunton is gearing up to host the World Cup matches by producing some high-scoring games. In the two matches played here in this season, the hosts Somerset posted a total of 358/9 and 353/9 in a 39-over match respectively. Chasing big targets won’t be an easy task for any team here due to the turn produced on dry tracks here.

The International stars in form of Aiden Markram and Azhar Ali have been quite consistent with the bat are and expected to continue the same. Liam Dawson’s exploits with both bat and ball have been crucial for Hampshire. Craig Overton has 20+ points in all matches he played this season. 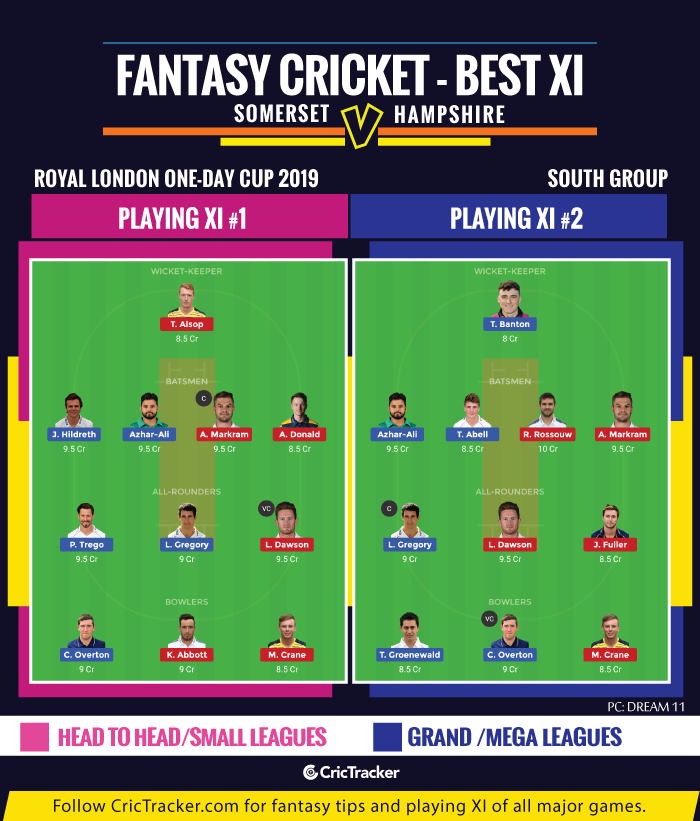 Bowlers of both Somerset and Hampshire have been quite successful in terms of taking wickets. Craig Overton is best among the lot having gained 20+ points in all matches. Mason Crane could be quite handy given the dry track in Taunton.

Somerset will come out with all the guns blazing in the must-win game against Hampshire.