Wayne Parnell earned over 70 points in each of his previous two matches.

The game between Worcestershire and Yorkshire will be a do-or-die game for both the teams considering their performances in the North Group thus far. Worcester team has won four of their six matches and are placed at No.4 in the points table. They need at least one more win from the last two games to make it to the playoffs. Victories in the last two matches will confirm their berth without relying on the results of remaining matches.

On the other hand, Yorkshire kept their playoff hopes alive following their win against the Northamptonshire in a rain-affected game. Yorkshire won only two of their six matches while two games ended without a result. They need to win both their matches from here on to finish in the top three. Yorkshire would be going down if they stand equal with 10 points as other teams gain edge having won more games.

The 2019 Royal London One-Day Cup game between Worcestershire CC and Yorkshire CC in the North Group will be played at the New Road in Worcester.

This game can be streamed live on Worcestershire’s social media accounts.

This County Ground at the New Road in Worcester recorded four totals of 300+ in the last five full 50-over List A matches. The game played on Wednesday between the hosts and Nottinghamshire turned out to be a low-scoring affair. The visiting team were bundled out for just 121 breaking the streak of 300+ totals. Saturday is expected to be a dry day and scores around 280 can be expected from the team batting first.

Wayne Parnell looks ideal choice as captain at the moment if there is any help of the pitch for the pacers. The South African would be adding value for the hosts with the bat as well. The likes of Harry Brook and Tom Kohler-Cadmore have had a couple of good games of late. Daryl Mitchell is someone who could turn things upside down in all departments on any given day. 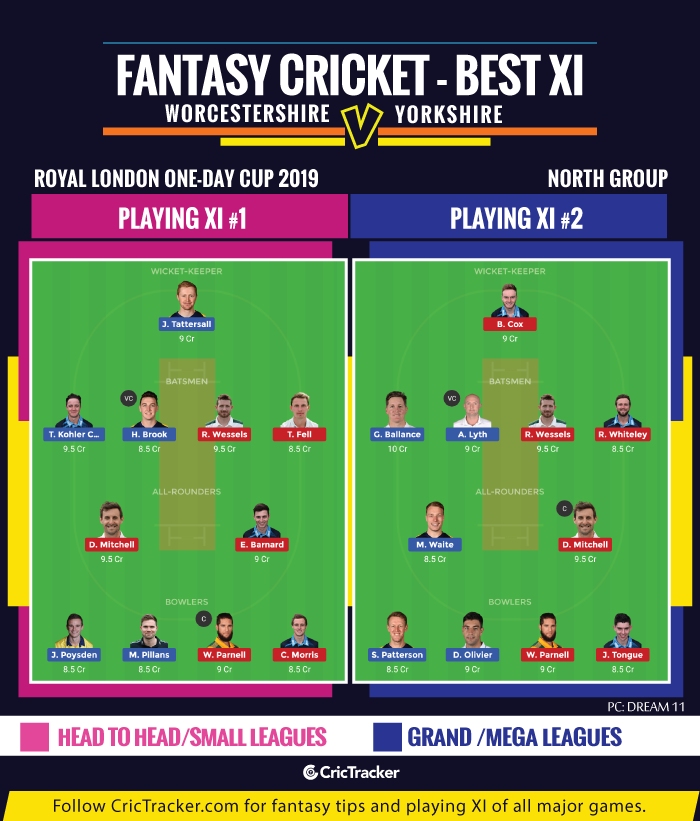 This game is worthy in filling with top-order batsmen but only on a regular Worcester track. However, the conditions over the last few days in Worcester don’t inject any confidence in making such a move. The nature of the track could make or break any fantasy team.

Worcestershire is expected to make use of playing at home against the Yorkshire.