South Africa U19 skipper Bryce Parsons should be your top pick for this match. He has mustered 120 runs in his two games that includes a brilliant fifty against the in-form India Under-19s.

The 5th match of the SA Quadrangular U19 Series, 2020 will be played between South Africa Under-19s and Zimbabwe Under-19s at the Kingsmead in Durban.

South Africa Under-19s are still due to seal their berth in the ongoing Quadrangular series and they will look to do it by winning their last league game. At the moment, Proteas and Kiwi colts have the same points (4) in the league table with the run rate being the difference between the two teams. It is an important game from the perspective of the hosts and they will have to come up with an improved effort against Zimbabwe Under-19.

Proteas skipper Bryce Parsons has so far played the role of sheet anchor with the bat and is the leading scorer for his side. And, it would be interesting to watch if he can replicate his form in the crucial game. Zimbabwe Under-19s have been ruled out from the tournament with no win in the all games played in the ongoing tournament.

They might expect a win in this match of the Quadrangular series against the in-form hosts’. For them, Dylan Grant and Dion Myers have emerged as the top performers for their side. They will look to ruin the home side’s chance of qualifying for the final.

The atmosphere is expected to be clear for a cricket match with no hindrance of rain on the game day. The temperature might also be suiting that will deviate between 24 and 29 Degree Celsius throughout the day according to Accuweather.

The track at Kingsmead is expected to offer an exciting contest between bat and ball. So far in the tournament, the batsmen have successfully managed to score runs in the early stages but struggled in the latter part of the game. If the fast bowlers have to get some wickets in the first half of the game then they will have to hit in the right areas, otherwise, they will be smashed for runs on this ground. The majority of the games in the Quadrangular series are won by the side batting first and the same trend is expected to be followed in the next match.

Average first innings score: 214 (Two matches played at the venue so far in the tournament)

South Africa U19 skipper Bryce Parsons should be your top pick for this match. He has mustered 120 runs in his two games that includes a brilliant fifty against the in-form India Under-19s.

David Myers has given impressive performances while batting for Zimbabwe Under-19s and he is one of the positive prospects for his team in the ongoing Quadrangular series. Mondli Khumalo has taken 5 wickets so far that consists of a brilliant four-wicket haul against India. And, his stats make him an important player for the next match. 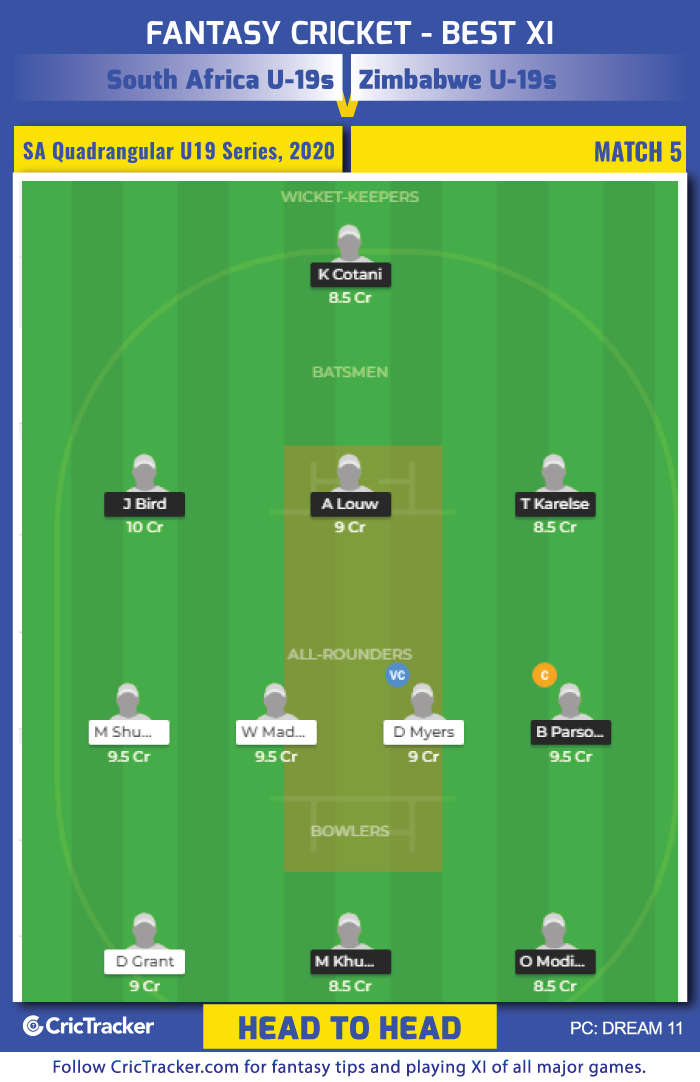 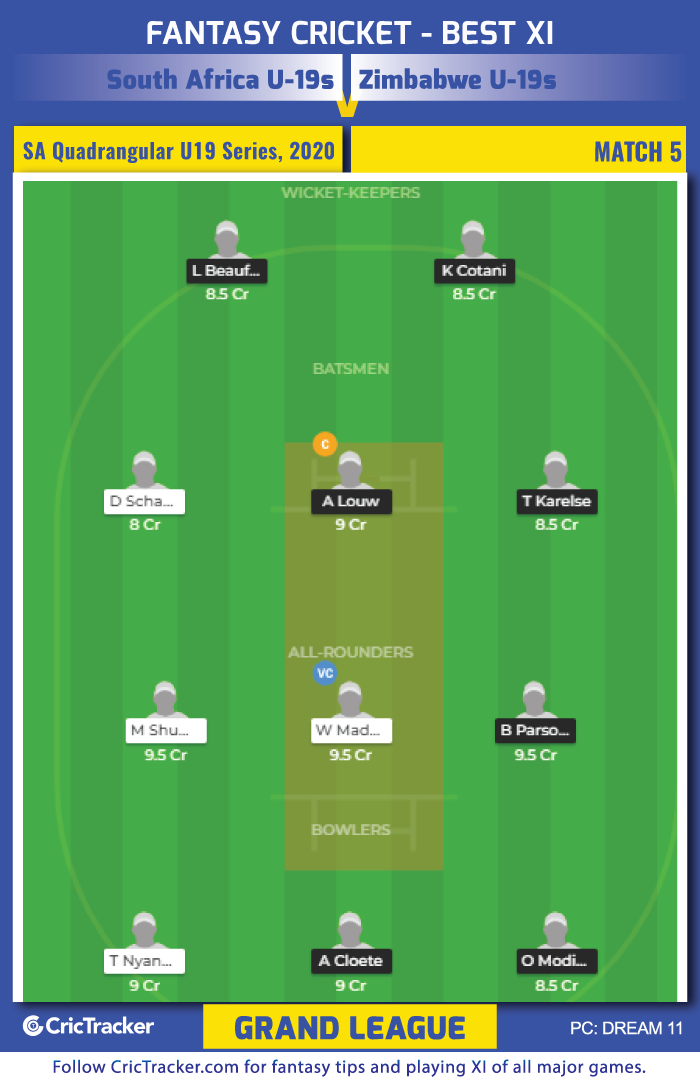 The users should go with the in-form openers of South Africa Bryce Parsons and Andrew Louw due to their good form with the bat. Leaving them outside your Grand League Side might turn out to be a poor decision.

Zimbabwe might look to test a few other players for this match as they’ve been ruled out of the tournament. Watch out for Playing XIs after the toss. It will be updated after the toss here (or on our Telegram channel) if the information is available on time.

South Africa Under-19s are expected to register a win against Zimbabwe Under-19s: