The third day of the Ranchi Test was a microcosm of how far the fast bowling attack has come.

Okay! Tell me when was the last time you heard an opposition captain admitting that his fast bowlers were out bowled by the India’s pacers? As you read this, I’m sure your mind is going back to that fateful winter afternoon of Durban in December of 1996. 100 all-out followed by well…66! Your mind would have also gone towards that equally embarrassing afternoon in Barbados in 1997. 81 all-out while chasing 120.

Ohh! That still hurts! Beaten for pace. Beaten for skills. Beaten in the mind. Total annihilation and complete humiliation. If you’re a fan of Team India of a certain vintage, that fateful day on the cold winter of 1996 and the following summer of 1997 will forever remain one of the lowest points.

Yep! There have been worse times. For example, the 1999 tour of Australia or the overseas cycle (0-4 in England followed by 0-4 in Australia) in 2011-12 where India was beaten even before they had turned up. But, that 1996 Test in Durban and the following season of 1997 remains the embodiment of what plagued Indian cricket.

As an Indian fan, you’d see the opposition fast bowlers bounce the hell out of your batsman. And, it was not about batters being unleashed to top-quality fast bowling on tracks that aided them that disappointed you, it was the sad realization of them not possessing the same weapons of destruction in retaliation.

Teams like Australia, South Africa, New Zealand, and the West Indies during their prime would prey on this limitation and prepare seamer-friendly tracks every time India were in the town, knowing very well that they won’t get the taste of their own medicine. “Yep! Javagal Srinath or Kapil Dev, if you’re talking about the 1980s could pose some trouble. After that, it would be a walk in the park,” they felt.

And, to be fair to them, they would be vindicated on most of the occasions. They certainly were proved right on that cold winter afternoon of December 1996, when Alan Donald and Shaun Pollock, in one of the most hostile displays of fast bowling, bowled the famed Indian batting unit twice within a span of a single day.

Cut to 2019. South Africa are touring India for a three-match Test series. And, even before they had landed on the Indian soil, talks about the pitches had already started to come from the visitors camp. And, to be honest, they had good reasons for it. The last time they had come to India, their much-famed batting line-up was sent into a spin tangle so obscure that by the time the caravan moved to the last Test, the only talking point was how long would the hosts take to wrap up the proceedings.

South Africa prepared for the spin Test, the seamers came out of syllabus

So, coming into the Test series, the South Africans appointed Amol Muzumdar to boost their chances of countering the likes of Ashwin and Jadeja, little that they had realized that weapons of destruction have changed. They got the first taste of it in the second innings of the 1st Test when Mohammed Shami ran through their batting unit with his pace, reverse-swing, skiddies coupled with sustained relentlessness and hostility.

“It can’t happen, twice. Naah! We have just scored 400 plus runs against the same bowlers. Surely! Spin, Yes! But their fast bowlers can’t rattle us again especially on these tracks where our pacers have been ineffective.” An average South African would have shrugged it off. They would have expected stern tests against spin going into Pune and Ranchi. 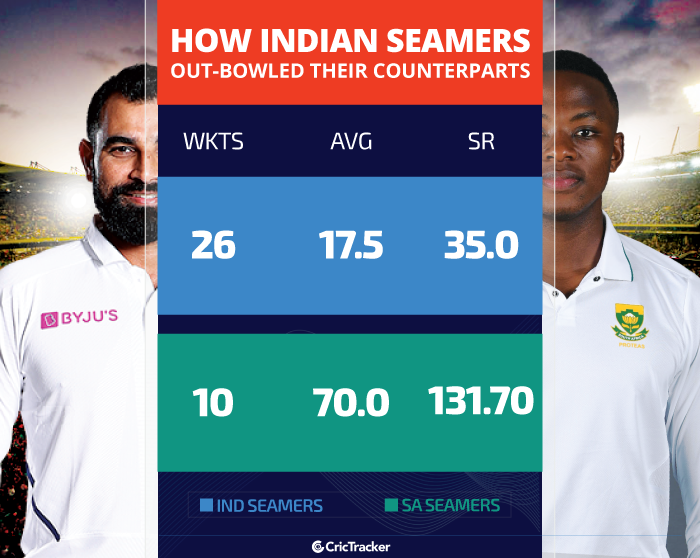 In fact, the South Africans- including their lower-order, at times looked quite comfortable against spinners, a vindication of their preparation against spin leading into the series. But what the visitors hadn’t realized that this Indian team no longer needs designer tracks where their spinners would walk past opposition for fun. In Mohammed Shami, Umesh Yadav, Jasprit Bumrah, Ishant Sharma, they have a set of fast bowlers who are hungry, skilful and relentless.

And, the third day of the Ranchi Test was a microcosm of how far the fast bowling attack has come. Not only for the wickets that they took but for the sheer hostility, relentlessness, and mastery over their art. And, for an Indian fan, who had seen those nightmarish days of 1996 (Durban) or Barbados (1997) or Lord’s (2011) when Zaheer Khan hobbled off on the first morning of the Test series, it was a moment so emotional and obscure. After all, their longstanding scars had been healed, sometimes they would have never ever imagined in their wildest of fantasies.