Sarah Taylor - The maverick cricketer whose legacy goes beyond numbers

Sarah Taylor – The maverick cricketer whose legacy goes beyond numbers

Sarah Taylor will always be remembered as an epitome of greatness and a slayer of her demons.

Sarah Taylor’s retirement tells us how much we take life for granted. How we think that we are impervious, impenetrable, once we reach the top, only to realize how lonely it is up there and the only way is down! This is particularly true for public figures. I mean, just imagine! You are constantly under scrutiny. Everyone- fans, media, writers, photographers- wants a piece of you. From your off-field shenanigans to your on-field antics, from your social media posts to the latest Instagram story to your latest ‘fling’, everything is under scrutiny.

You are at the peak of your powers. You are going through what they say: A Purple Patch. You are winning games for your team single-handedly and subsequently transcending the limits as to what can be achieved on the field. The pundits are in awe, editorials are being churned out; the fans? Well! They can’t get enough of you. Such is your effect on them that they use your name in their social media handles; some even make your face as their display picture. Some go as far as naming their baby after your name.

You kinda like it; even if you say it doesn’t affect you, it sure does! It’s human nature, right? Everyone likes it when they are admired for their achievements. It kinda becomes our guilty pleasure to read or hear the good things talked or written about us. But, and this a big BUT, the problem starts when it starts getting in your head and you’re like: ‘What if it all ends tomorrow?’

Amidst all the adulations, fanfare, trophies, handsome paychecks and global recognitions, there is always a fear lurking in their inner-self: What if I do not perform like this tomorrow? What if I disappoint the folklore? What if, if all of it disappears tomorrow? And, amidst all this fear, there’s a reality lurking in your mind, what if I am not the best anymore??

Sport is cruel. From excruciating highs to unbearable lows, it is a constant roller-coaster that bores the closet reflection to ultimately what life is. It’s unpredictable. Back in July, Sarah Taylor spoke to ESPN CricketMonthly and addressed this issue to the hilt. Taylor on how she shouldn’t handle at being the best in the world, purely because the only way was down. 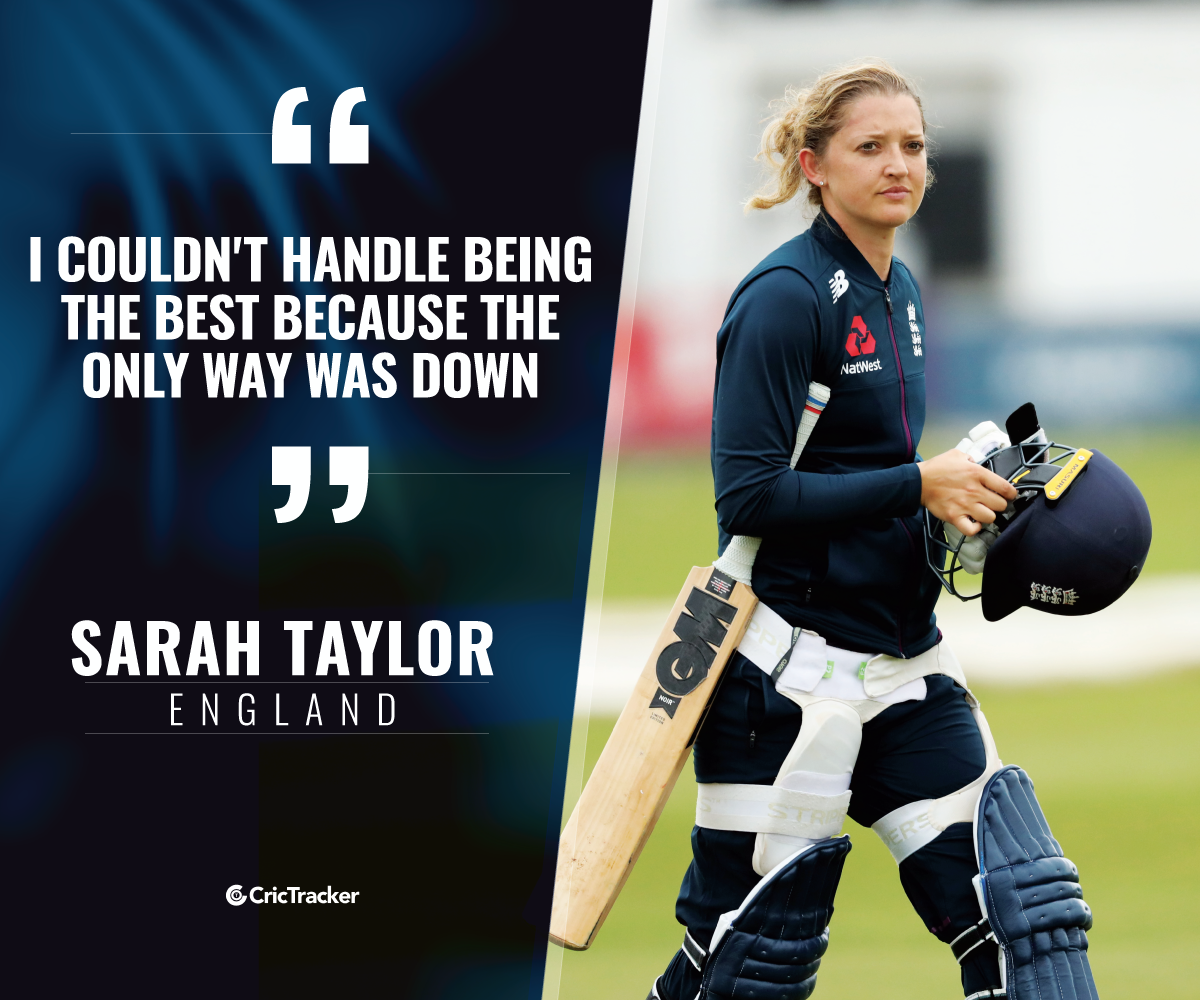 This was off-course coming from a cricketer who had achieved everything that this beautiful game has to offer: 50-over World Cups, T20 World Cups, Multiple Ashes [3], ICC Women’s T20I Cricketer of the Year in 2012 & 2013 and the ODI equivalent in 2014, Most dismissals by a Wicket-keeper in Women Cricket (232).

Add to it the ultimate praise coming from a guy who revolutionized the role of a Wicket-keeper and somewhat made it cool and sexy, ‘ She’s the best going around, male or female’: Adam Gilchrist.

That praise from Gilchrist came after Taylor had added another chapter in her portfolio of outrageous leg-side stumpings, when she gathered a half volley from Katherine Brunt, before effecting a lightning stumping, one that would have made even MSD proud. Despite scoring all those runs [6,533 runs with seven 100s]  that Taylor did, it was her funky wicket-keeping, her lightning speed stumpings, her outrageous one-handed screamers behind the stumps made her a favorite among the folklore. Thousands of videos galore on YouTube reminiscing her genius.

Taylor also went on to reflect how the professionalism in the game and the subsequent expectations and adulations that came with it, meant she- a seeker for perfection in almost everything she did- just felt how she was putting a lot of undue pressure on herself. 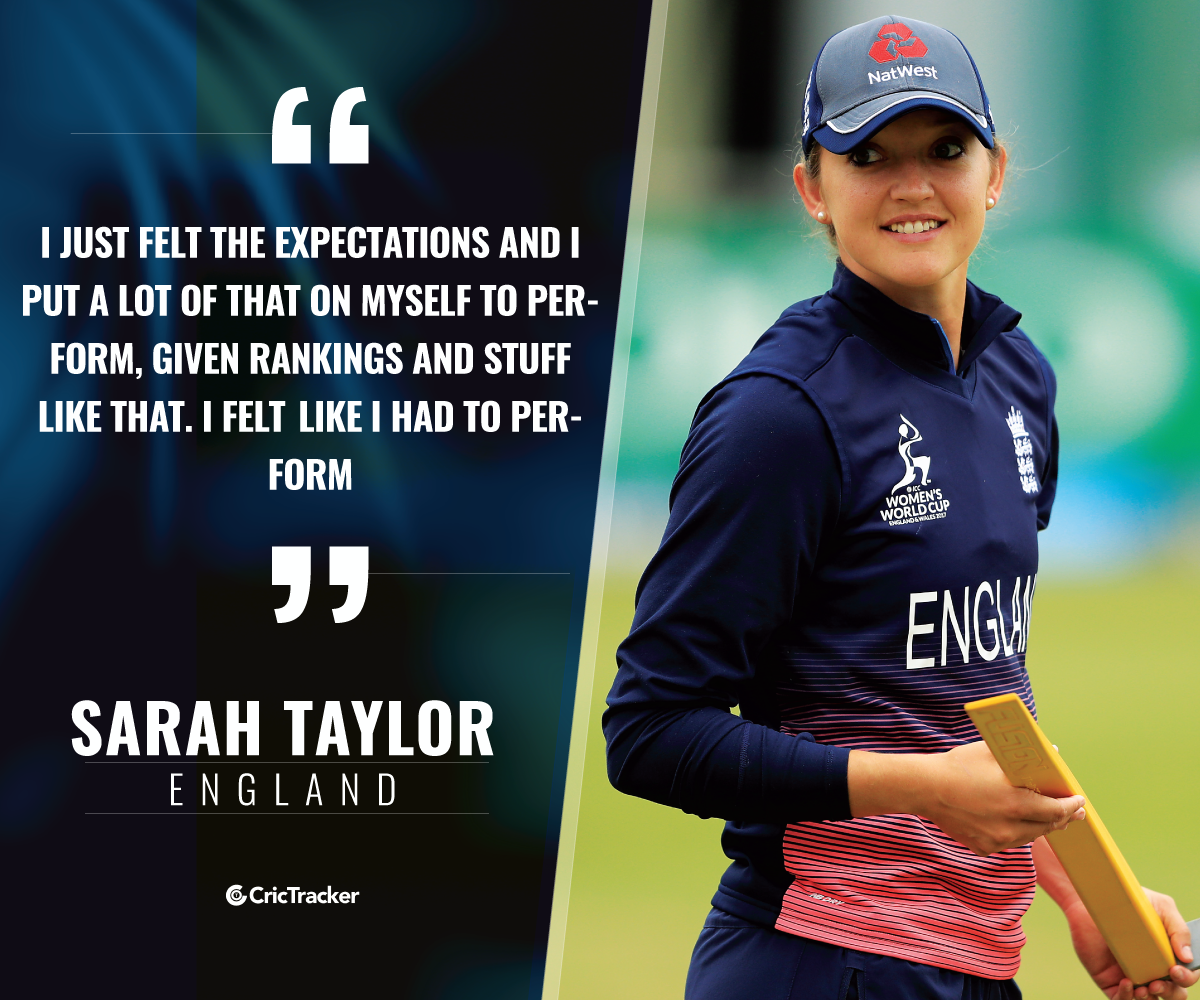 Some days the burning desire for her quest for excellence-par perfection would fuel her to ‘push the envelope’, while on others, her drive for ‘everything to be perfect’ would border on obsession.

Even though Taylor had taken her first break from cricket in 2010, it was in 2016 that that dreaded question came to hound Sarah: ‘What if I’m not-good-enough, anymore?’

After scoring 43 runs in 3 T20Is against South Africa in February, followed a forgettable World Twenty20 campaign in India where she averaged just 9.60 and was heavily criticized for her shot in the semi-final against Australia. It was after this tournament that Taylor took a break from the grind of cricket.

“Just before I took the indefinite break [in 2016], I learned I couldn’t deal with not being the best. It was in that [World T20] tournament that I was ranked No. 1 in the world in T20Is. I got to [being] the best and I couldn’t handle it because the only way was down, and I didn’t know how to process that”.

Taylor didn’t play any international cricket between March 2016 to May 2017. Since making a return to the side for the 50-over World Cup, the wicketkeeper had had to limit her overseas travels. She had developed agoraphobia that inflicted fear in her of not being able to get off a plane once it took off.

She even pulled out of the 2018 World Twenty20 in the Caribbean, to avoid flights and domestic travels and only agreed to tour India predominantly because it did not involve any internal travels with all games being played at the same venue. She didn’t have a great stint, managing just 13 runs across three games.

Taylor’s issues flared up during the recent multi-format Ashes, forcing her to sit out of the Twenty20 leg, one that the Aussies went on to win comprehensively. Australia winning the Ashes [12-4] cost coach Mark Robinson his job, and losing a person so integral to her revival back in 2016, must have made her decision of leaving the game a little easier.

Taylor, off-course is only one example of what constitutes a long list of Elite sportsman falling out of love with the game with the pressure of expectations and scrutiny taking a toll on their mental health. And, as ironic as it may sound, Taylor’s retirement comes a day after Marcus Trescothick- another cricketer who retired from International at his peak due to anxiety-related issues- walked away from the game after his 26-year stint with Somerset.

Despite suffering all those issues, Trescothick slowly and steadily continued ticking off every box, there is for a professional cricketer, showcasing his resilience, drive. Trescothick’s battle and his redemption can be a great case study for not Taylor but for others as well no matter which field they are from.

As for Taylor, she might have retired from the Elite level, but her legacy wouldn’t be restricted to the number of runs she scored on or the number of trophies she won, it will be more than that. It will transcend as a case-study for aspiring cricketers- Man or Woman- as to how one should deal with expectations, adulations and the pressure that comes from it.

And, as for us fans, if she can do what Trescothick did after his International retirement, if she can play domestic cricket and give us another moment of brilliance either in front or behind the stumps to savor: Well! Nothing like it!! Even if she doesn’t, she will always be remembered as an epitome of greatness and a slayer of her demons.