Both teams are playing after a gap of three days. The Sorath Lions have three back to back matches to play now on the 18th, 19th and 20th of May. It will get very hectic a schedule, especially with the temperatures soaring. The Lions come into this match after a win against Royals (by 8 wickets) whereas the Kutch Warriors lost their first match to Halar Heroes by 24 runs. Here is all you need to read for both the teams before picking your Fantain XI.

It is fair to say that the bowlers stole the show in their first match against Zalawad Royals. Chetan’s 4-wicket haul was timely and broke a crucial partnership. Economical bowling helped restrict the opponent to a low score. It was then a matter of hitting the target.

After a strong start by the Halar Heroes, The Kutch Warriors stepped up the bowling to remove the middle and lower order batsmen and restrict the total to 147. It was the batting that let them down.

J Unadkat: A lot of hopes are riding on this player. His numbers at the Indian T20 League were not that impressive. Unadkat broke his silence on Sunday as he took to Twitter and vowed to come back stronger.

Chetan Sakariya: A bowler that can break partnerships is always the player to pick in a fantasy lineup.

Avi Barot: 35 runs in 24 deliveries. His contribution came at a desperate stage.

Barad: He started his tournament with a half century. There is a lot more where that came from.

Tarang Gohel: Fielding does not come easy to many players. Gohel’s statistics from the domestic matches speak for him. 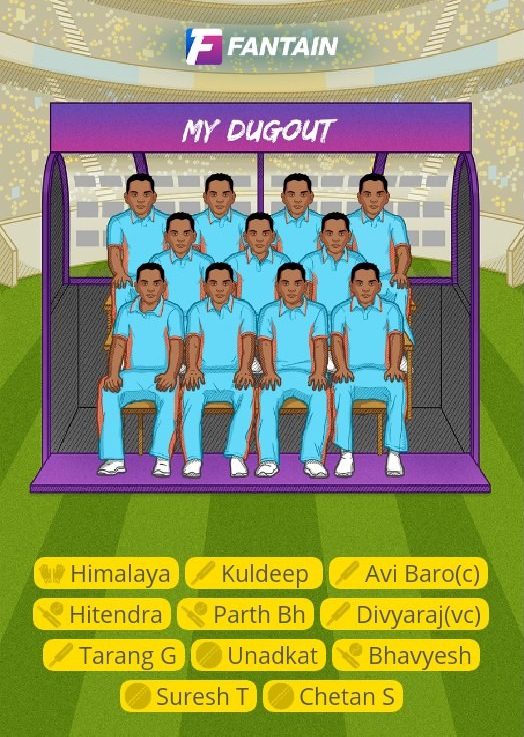