The Qualifier does not only grant a straight ticket to the final, but the winner also gets to host the game.

The 10th edition of the Big Bash League (BBL) is well into its decisive stage. And it is a top-table clash between the Sydney Sixers and Perth Scorchers, which will finalize one contestant who is going to feature in the BBL 2020-21 final on 6th February 2021. The Qualifier does not only grant a straight ticket to the final, but the winner also gets to host the game. Therefore, the clash is crucial in every sense of the word.

It is a contest between the two best teams of the year, and regardless of the result, it promises ample for those witnessing it from the outside. The task of choosing favorites is hard as the record of the two teams this year has been simply sensational, and their meetings against each other give a balanced outcome too.

While the Scorchers thumped the Sixers by 86 runs in Perth, the Sixers avenged their loss in Canberra by a 7-wicket victory over them. Both the sides have churned some spectacular performances too. They have an explosive top-order setup as Josh Philippe and James Vince has fired for the Sixers, whereas Jason Roy, Liam Livingstone, and Colin Munro have been amongst the runs for the Scorchers.

The fixture is scheduled at the Manuka Oval, Canberra. The track has often been on the slower side, although it has been a moderately high-scoring venue. Given the chasing record at Canberra in this season, it is safe to conclude that teams will prefer chasing over defending.

Plating combinations for SIX vs SCO

In 14 games this season, Philippe has amassed a staggering 454 runs at an impressive average and a strike rate of 32.42 and 149.34, respectively, and his 51 fours and run-tally stands second only to Alex Hales.

No bowler has picked as many wickets as Richardson this season. His 27 wickets (in 14 games at a frugal economy of 7.08) are 5 better than the second-placed Mark Steketee, who has 22 wickets in 13 games.

The prediction is for the Sydney Sixers to win the match. 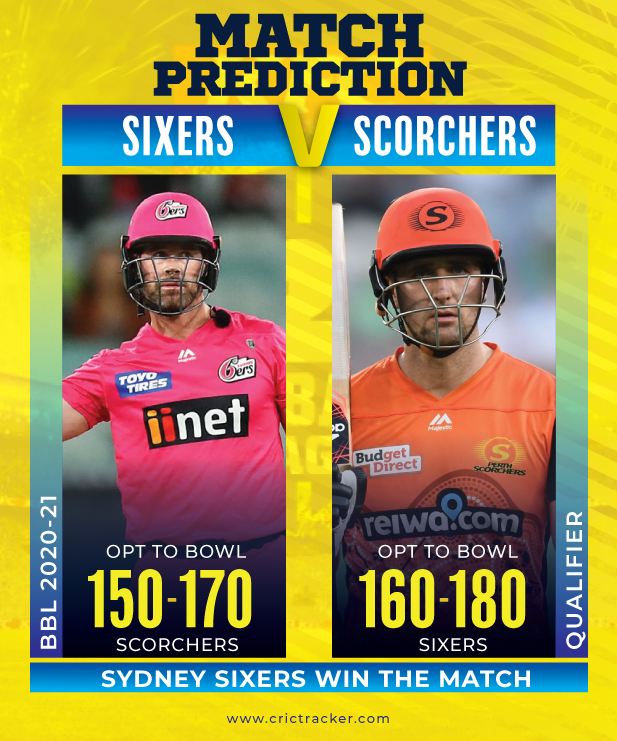